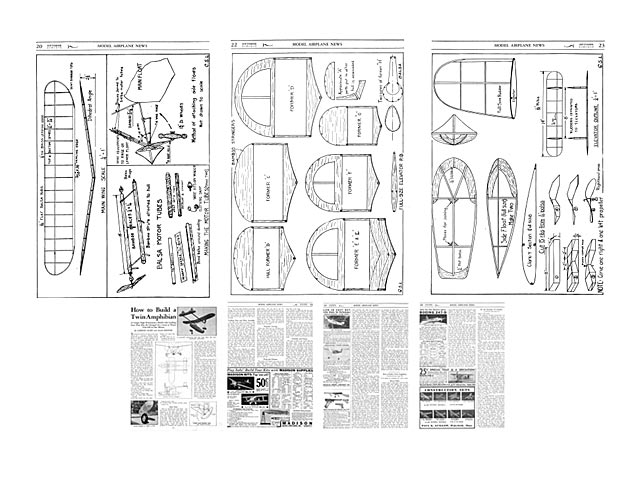 Quote: "How to Build a Twin Amphibian. A Unique High Performance Model with Landing Gear That May Be Changed for a Land or Water Take-Off in One Minute. By Gordon Light and Alan Booton.

TRANSATLANTIC air lines in the near future are a certainty. Model aviation should be prepared for this newest step in flying, so here is a model amphibian that is capable of flying passengers and mail over any 'model' ocean air line. This amphibian takes off quite eas-ily from laud or water and the av-erage flight of about SO seconds is packed with thrills.

The most difficult part of designing this model was to make it take off water. I began experimenting last fall but cold weather called a halt for all water take-offs. However, Alan Booton, whose 'Helpful Hints for Model Builders' are familiar to all readers of Model Airplane News, continued the experiments. Taking advantage of the warm Florida sunshine, he was able to iron out all the kinks, so now the model is a sure-fire performer. Careful designing of the main float assures you a quick water take-off. There is no better model to take along on your vaca-tion. It will never fail to give a thrilling performance whether it is on land or sea.

Let's get started, it really isn't hard to build.

Main Float: Start by building the main float. Cut the formers from 1/16 sheet balsa. The longerons of the float are 1/16 square balsa. Build the float framework just as you would build any fuselage model. Cement seven bamboo stringers to the top of the hull. Note the curve in the bottom of the hull. The bottom juts out into a point just in front of the step. The bottom is a flat 'V', the sides of the 'V' being concave. These two features are essential in breaking the suction of the water during the take-off.

The rear end of the hull is a solid piece of balsa wood cut to the shape in the drawing. The piece is former 'H' in the drawing. Former 'A' at the front of the hull should be fitted in place after the other parts of the float have been completed. Reinforce formers 'D' and 'E' with small pieces of balsa along the side where the small floats are attached.

Finish the skeleton framework of the hull, then cover the bottom and the sides with 1/32" flat balsa. Covering a frameqwork with sheet balsa is a tedious process at best and the only helpful advice we can give is: use anything - pins, rubber bands, weights, etc - that will keep the balsa in shape while the cement dries. Cover the top with tissue as there is little danger of leakage there, but don't cover the top of the float until later as it will be necessary to reach inside the hull to attach the small floats.

The two small floats are made the same way as the main float. Cut the formers from 1/16 balsa and assemble the framework. Cover the floats with 1/64 flat balsa. The thinner the wood the more easily it is bent around the sharp curves of the small float. On the top, reinforce the formers with balsa as you did in the main float. Before attaching the side floats..."

Hi Steve and Mary - Hope the New Year goes well for you all ! This is the Gordon Light Twin Amphibian scanned directly from my issue of the September 1935 Model Airplane News. Most parts are shown full size. It looks like it would be a good flier with any power or control system. Submitted by Jeff McCammant Story City Iowa USA... 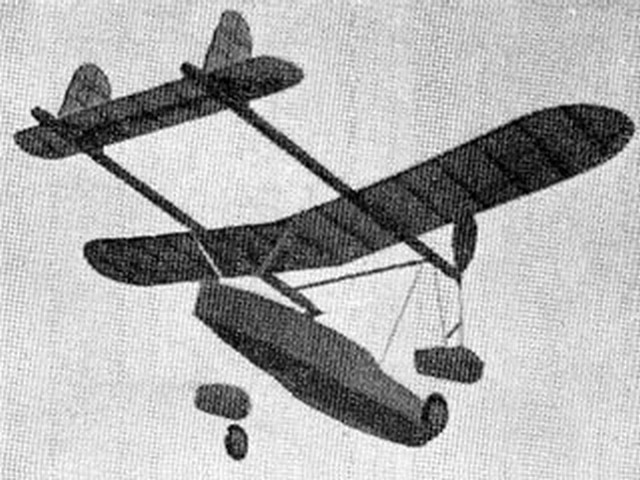