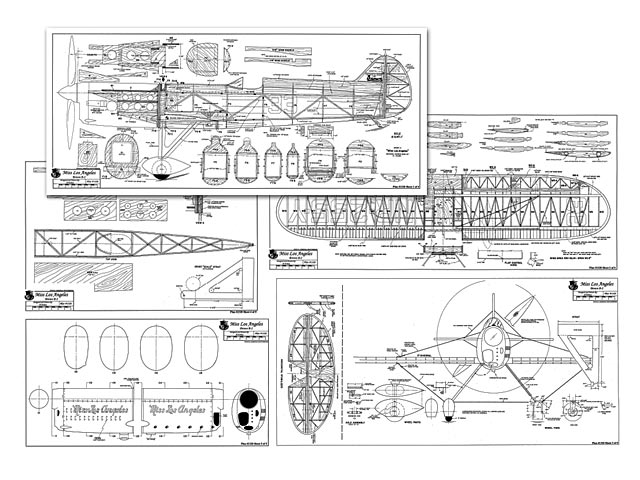 The model described here is the 1934 B-2 designed by the Lawrence W Brown Aircraft Co of Los Angeles, California, for pilot Roy Minor. Harold A Osborne rendered the drawings I used as reference, and they were published in the November 1972 issue of R/C Modeler magazine. The drawing is 2-3/4 in to the foot and so is the model. You may well ask, why not go to 1/4 scale? The reason is simple - the available sizes of wheels and spinners.

The 1934-38 version was painted bright red with gold leaf graphics. There was also a 1939 modification that was international orange with gold lettering.

There is not a lot of accurate or reliable information to be found, other than the above-mentioned drawings of the original B-2. There are a good number of photos and some background information that can be had from the Air and Space Museum in Washington DC. There are some 3-views around, most of them giving what seems to be conflicting information. This is not hard to understand, as this airplane went through what I described as 'modification of the week.' Original construction drawings just don't seem to be available. It you come up with a source, please let me know about it.

You have to be careful when ordering photos from the Alr and Space Museum, because as with many aircraft of this type and vintage. you will notice modifications made after the fact. The pictures range from original factory photos, to shots made by the aircraft owners, to photos of a home-built reproduction of the B-2. The choices of modifications to pick from are almost endless.

The B-2 was designed to make a direct challenge to the larger, more powerful racing planes of the day. Most of these planes were much heavier with a lot more power, some as much as a 1000 plus hp. The flat-out speed was indeed in favor of the more powerful planes, by as much as 20 to 30 mph on the straight-aways. Because the B-2 was small, lightly loaded, and very agile, she could just about kill the competition in the turns, with a top speed in the 270 mph range. Speed, combined with its turning ability, made the Miss Los Angeles very competitive.

The design of the wing was also somewhat of a departure from the norm. The leading edge was covered with two plies of cloth instead of plywood or metal. This was done to assure a smoother leading edge contour and resist the tendency of the fabric tearing. The airfoil was a modified Curtiss racing curve with an unusually sharp leading edge. The ribs were unevenly spaced at increasing intervals from root to tip.

Perhaps a more sensible way to make a scale model of the B-2 would be to use the modern replica that was built in the early 1970's or thereabout. A good reference article can be found in the November 1972 issue of Private Pilot Magazine (Miss Los Angeles is Alive and Well in San Francisco) by Bill Turner. Contact almost any aircraft photo service for a very fine set of color photos of this plane (B-2 Racer N255Y). Using the modern B-2 would have made it a much simpler model to scale. The addition of the tail wheel would make for improved ground handling and the missing two rows of cooling vent louvers on the left side, thirteen in each row, would indeed make the cowling simpler to duplicate. However. I went the hard way. I guess I'm just a glutton for punishment. The Miss LA is a very classy lady!

The B-2 managed two second place wins, one in the Thompson Trophy of 1934, and the other in the Greve Trophy of 1935. There was even some thought given to developing a fighter from this design. The B-2 was designed and built for race pilot Roy Minor. After his death, pilot Marion McKcen owned, modified, and raced Miss L.A. with some success. The aircraft was borrowed by pilot Lee Williams for the 1939 Greve Trophy race, and destroyed in a crash at the scatter pylon. Williams was killed in the crash.

To help a little in detailing the cockpit, the only instruments on board were Air Speed Indicator, Oil Temp. Indicator, Oil Pressure Indicator, Cylinder Head Temp., Altimeter and Tachometer.

I once asked Bill Winter why I never saw a scale model designed by him. His answer was two-fold: I would rather push the envelop to new design frontiers. Besides, you never seem to finish the darn things, you just stop, at some point. and fly them..."

With many thanks to EJWash1, for scanning the full size plans. 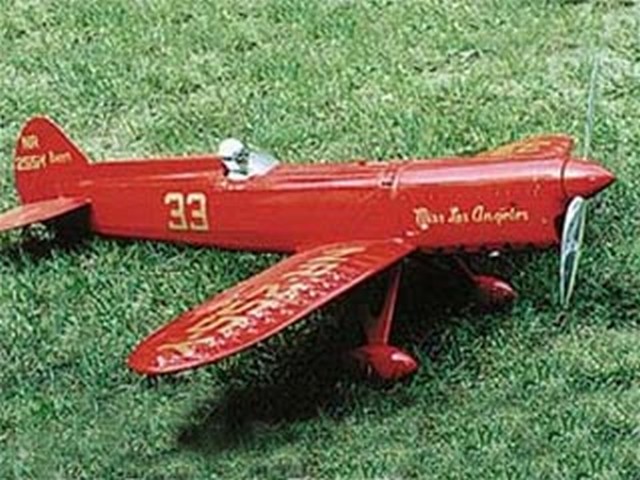