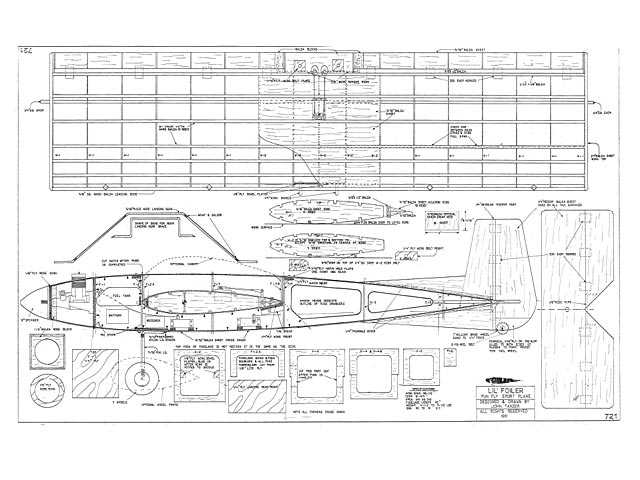 Quote: "Pared down for .40- to .51-size engines, this RC sport model flies with the same spry authority that made its .60-powered sibling so popular. Lil Foiler, by John Tanzer.

My .60-powered RC Foiler, published in the May 1991 issue of Model Aviation, was so well liked by club members that they talked me into designing a smaller version for .40- to .51-size engines. The result is Lil' Foiler.

I shortened the wing to 48-1/2 in, giving 615 sq in of area, but used the same airfoil. The fuselage too is six inches shorter and an inch thinner, and the tail has been scaled down as well. As with the original, larger design, the airfoil shape of the fuselage enhances stability in all flight attitudes.

Lil' Foiler is small enough to be transported to the flying field fully assembled. It weighs 41/2 to 5 lb., depending on such factors as the materials and type of finish used.

This model is a joy to fly. Taxiing out is easy - the tail wheel in the bottom of the rudder works like a charm. Add power, and takeoff is straight, with no veering to the left. A snap roll on takeoff is quick and easy. Release the sticks, and the craft straightens out again. Directional stability is phenomenal; yet when you want to do something wild, Lil' Foiler responds immediately. Lomcevaks, snap rolls, knife-edge, inverted flight, rolling circles, point rolls, slow rolls - this model will do it all.

Stall speed is so slow that the plane almost comes to a stop.

My friend Mike Schillizzi built a Lil Foiler. He's using a SuperTigre .51; I'm using a Royal .45 ABC. Both models are quite fast - too fast for me, I might add; I fly at reduced throttle. We have found that the plane can be slowed down for a spot landing much more easily with an 11 x 6 or 11 x 5 APC propeller than with a high-pitch prop.

The basic structural design of the original Foiler is unchanged, though I added an optional canopy and wheel pants for improved appearance. Don't be put off by all the wing subspars. This construction method is easier, faster and lighter than using a sheeted D-tube and cap strips, and the wing is just as warp-free once it is covered.

Construction: Wing: Cut a master rib pattern from 3/32 balsa sheet. Check all notches for fit, using a piece of 1/4 in sq balsa. Sand the pattern to accurate contour. When it looks good enough to serve as a template, harden the edges by soaking them with Zap. Mark the top with a T; this will keep all the notches in perfect alignment.

Use the master to cut out all but the center wing ribs. Stack the ribs, and sand them to shape. Don't forget to mark each rib at the top. Cut the five W-2 center ribs. These are 3/32 in smaller at the top and bottom to accept the 3/32 balsa sheet at the center of the wing between the spars. Cut 16 vertical-grain shear webs from 3/32 balsa sheet. Stack the shear webs, and true them up with a sanding block. The wing is built in one piece using four-foot-long spars and subspars. The spars, leading edge, and trailing edge must all be perfectly straight to ensure a warp-free result.

Cover the plan with clear plastic or waxed paper. Pin down a hard balsa spar and a 1/4 in sq shim at the location shown on the plan. Add a 3/32 shim for the W-2 ribs at the center. These shims keep all the ribs level during construction. Begin installation with a W-1 rib at the wing tip..." 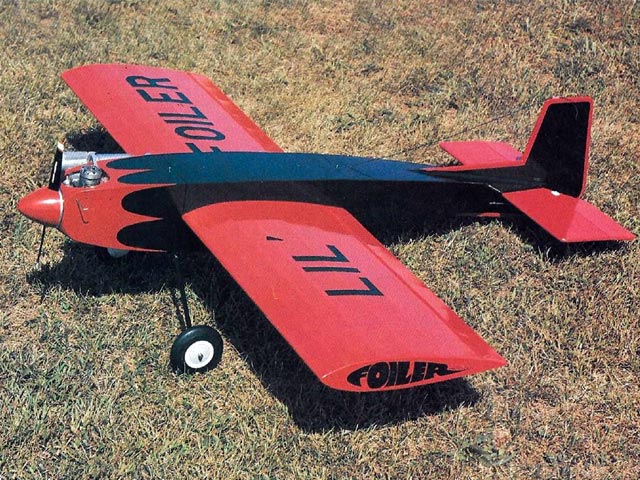