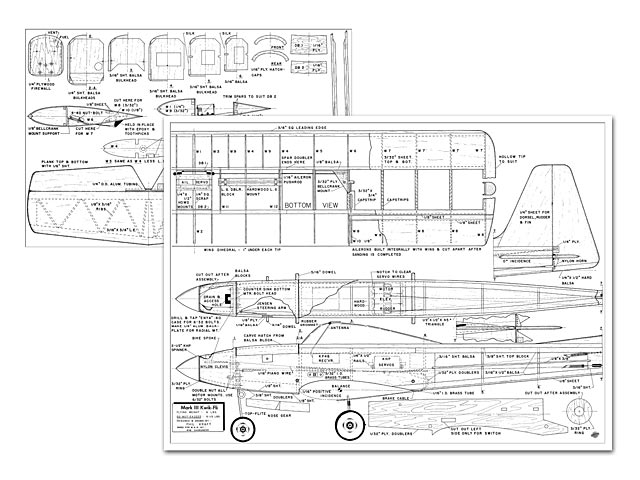 Kwik-Fli Mk III. Classic pattern plane. This plan seems to be based on the drawing that originally appeared in Feb 1968 MAN. Redrawn by Uncle Willie in 2007.

Quote: "Mark III Kwik-Fli. 1967's Top Multi plane can be aptly termed "Top Bird of the Time" without fear of contradiction or need of justification - winner of the '67 Nats and Internals with many other local and regional wins easily establishes merit for this claim. By Phil Kraft.

The Kwik-Fli series of aircraft started in late 1963. At this time I was just attempting to learn to fly radio control with our early experimental prototype proportional systems. The combination of a novice pilot and experimental radios wasn't particularly easy on airplanes. Consequently, the Kwik-Fli was conceived as a simple to build and thoroughly functional design. The name had no connotation as far as the speed of the aircraft was concerned.

The Mark I Kwik Fli (oz6526) had a wing area of 800 square inches and weighed approximately 7-1/2 to 8 pounds. Performance was very satisfactory, however, the large heavy aircraft did rely on a good engine run and we felt that this detracted from the overall reliability of the aircraft system. Therefore, in late 1964 a smaller version dubbed the Mark II Kwik Fli (oz7483) was completed and retained the fast building, easy, accurate alignment construction system of the Mark I but had a wing area of 630 square inches, and an all up weight of 5-3/4 pounds.

We flew a series of the Mark II Kwik-Flis until building a new fuselage early this year. This became the Mark III. During the process of constructing several Mark II Kwik-Flis, different air foil sections were tried. One was a semi-symmetrical 60%-40% section and another a 15% fully symmetrical section. The aircraft was too fast with the thin, full symmetrical section and didn't fly quite as well in all maneuvers with the semi-symmetrical. I came to the conclusion you just can't beat the thick full symmetrical section for contest work. It absorbs lots of power and the airplane flies almost as fast straight up as it does straight down. Consequently, the maneuvers are extremely smooth because of the constant speed characteristics. There is no real need to juggle throttle to maintain consistent maneuvers.

The Mark II Kwik-Fli had one major drawback. In any type of turbulence it had a very sexy tail wiggle. All sorts of remedies were tried to eliminate this including sub-fins, wing fillets, etc., but nothing improved this basic fuselage design.

When it came time to get a new design ready for the Internationals in Corsica it was decided that we would try to eliminate the basic defects in the otherwise entirely adequate Kwik-Fli II. I believe that probably the tail wiggle and general directional instability of the Mark II was caused by the high thrust line, high On and very low center of drag created by the thick wing.

The Mark III has the thrust line lowered almost one inch and the nose length increased one-half inch. The rear of the fuselage has been deepened and the fin moved back, and increased in size with a really huge rudder. Lowering the thrust line and the mar lateral area has done wonders.

The Mark III is superior to the Mark II, in the way in which is grooves through all maneuvers and is relatively free from the previous tail wiggle. The large rudder helps a great deal in maneuvers such as the Double Stall Turn, Tail Slides, Spins, Snap-rolls, etc. Of course, the wing remains exactly the same as the Mark II.

Structurally, the fuselage now has a 1/32 in plywood doubler extending aft to the servo compartment. There were weak points in the Mark II around the hatch and both of my earlier Mark II's developed cracks after long time use at the rear of the hatch line. The plywood doubler I think is actually lighter than the previous balsa doubler used, and makes an extremely strong, simple to build, fuselage.

While experimenting further with the basic Kwik-Fli design two Mark IV's were constructed with different taper wings. One utilized a 15% section constant %, the other a 20% root chord with 15% tips. The taper wing version with 15% section flew well enough, but was very unsatisfactory for contest use because the previous constant speed characteristics of the Kwik-Fli were totally lost.

The airplane was a speed demon and difficult to land because of its very flat, fast glide. The other Mark IV with the thick root section flew quote well. However, I could see no advantage to it over the straight wing version other than appearance. In fact, I don't think I liked it as well because the ailerons tended to be more responsive around neutral and yet the roll rate is relatively slow. Judging from these two taper wing Kwik-Flis the taper wing seems to constribute a lack of. smoothness in aileron response.

For those of us who might like to try the taper wing version I would suggest that the standard Kwik-Fli airfoil be used all the r ldotth progressive taper. I think this combination to be a very good aircraft, but still no better and probably not as good as the straight wing version.

A friend has a Kwik-Fli which is the smoothest I have flown. The only real difference between this aircraft and the regular Mark III is that the wing tips are raked back at an angle of about 30°. Theoretically, this type of tip has less drag and it possibly could improve the performance of the basic wing. This is something I hope to try in the future, although this type of wing tip does look a bit awkward and out of balance with the rest of the design.

The whole concept of the Kwik-Fli is to produce a simple, and as functional aircraft as possible. The engine is radially mounted as I believe this provides less vibration transfer to the rest of the airplane and is cleaner and lighter. The hatch fastened with rubber bands provides instant access to the fuel tank and battery compartment. At contests I prefer to fuel with the hatch off, as a precaution against leaky fuel lines or tank. Certainly, the rubber band fas-tened hatch detracts from the appearance but greatly simplifies maintenance for reli-ability. Rubber bands and dowels are still used to hold on the wing. No particular reason here except that this old fashioned method has been highly reliable.

The pictures show the tank and radio gear installation in detail. Servos are mounted on 1/4 x 3/8 in hardwood rails and are attached with No.4 wood screws. The wood screws are the simplest method of holding the servos and can be tightened to just the right amount to allow the rubber mounting grommets to protect servos from vibration..."

Update 25/07/2016: Replaced this plan with a more original version, thanks to JJ. This is the plan as it first appeared in the pages of MAN.

Have kept the Uncle Willie plan as a supplement file. May be useful, it shows the entire layout on one single sheet. 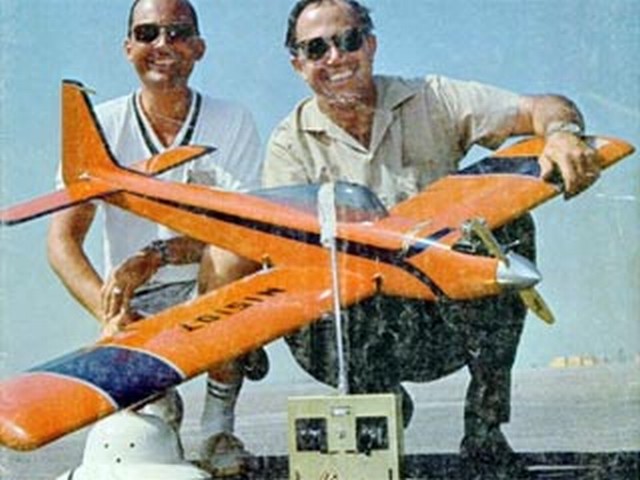 This is myself and my daughter Paloma with my Kwik Fli Mk. III which I built from M.A.N. plans in 1970 [morepics 004]. Naturally, Paloma didn't exist when I built this model and used it to win my first pattern contest here in Bogotá which took place on December 1970. This photo goes back to 1993 when Paloma turned 3 and the Kwik Fli was and still is in top flying condition. It started with an Enya .60II engine and EK Logictrol radio. It now has a Webra Speed .61 and a Futaba equipment. After so many years it has had a couple of recoverings with Monokote, always the same color and trim. One change was the acetate canopy for a carved balsa one. It still flies beautifully and gives me tons of satisfactory flights.
Eduardo - 24/01/2020
I remember Mr. Eduardo Barriga in his warehouse Britannia in Lourdes park, who was the one that made me fond of this hobby as a child and still continued to assemble and build aircraft models, memories of Britannia was a Sterling Piper Tripacer that I recovered and flew a good time ago behind. Cheers Mr. Eduardo.
Carlos Bolaños - 26/01/2020
Gracias Carlos, muy querido. In English, thanks Carlos, very nice. Please check a couple of additional pictures of my Kwik Fli Mk III, one in 1970 at the "ElMorado" model airport and the other in my home near the Guaymaral full size airport north of Bogotá [more pics 005, 006]. Same plane, older guy. Today in 2020 my Kwik Fli is like new!!
Eduardo - 05/02/2020
Hallo from Italy. I found an old Kwik Fli owned by an Italian model airplane. I restored it and here are the results [more pics 007-014]. Would you like to add photos to your database related to Kwik Fli Mk III (oz7431)? Thanks again for your big models archive.
Federico Tagliaferri - 11/07/2020
Add a comment