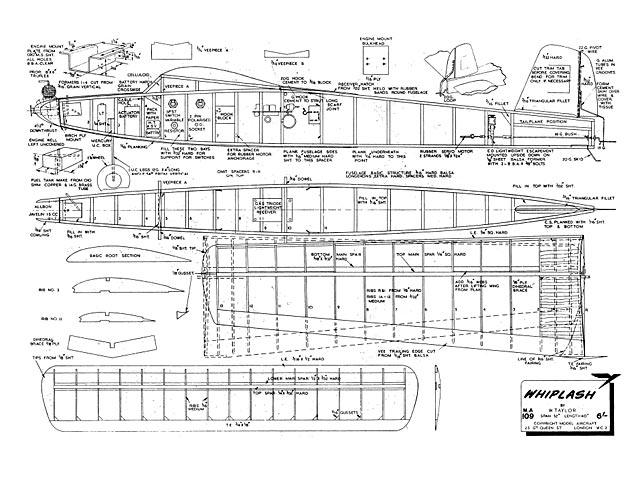 Quote: "Whiplash was designed especially for the Allbon Javelin engine, and the writer's 2oz R/C receiver, construction details of which were published in March 1950 Model Aircraft. Any other good engine of a similar capacity could, however, be used, and although most of the prototype's flying has been clone with the Javelin, an Elfin 1.8 was fitted when Whiplash won the SMAE International R/C contest and the Aeromodeller Trophy at Radlett at Whitsun.

The model has proved to be very reliable and extremely versatile. In normal trim it can perform vertical dives, loops, and flick rolls; whilst with more moderate use of the button it is as stable and steady in flight as any 'old timer.' When flown in strong winds, a little packing under the leading edge of the tailplane turns it into a real 'wind slicer,' capable of flying round any R/C course without undue effort - as was proved at Radlett.

The construction is quite straightforward, but where we have specified hard balsa, we mean really hard balsa.

Fuselage. Select the hardest 3/16 in sq obtainable for the longerons and medium-hard for spacers, Use Britfix cement throughout and pre-cement all joints. Make a good job of the long scarf joint in the top ]ongeron. Build the two sides in the normal way and when dry, remove from the board.

Join the two frames at the rear end, holding with a clothes peg, and insert the centre and front spacers. Add the rest of the spacers, omitting some on top for wing positioning.

Insert 3/16 in hard balsa formers at the front end. To No. 3 Durofix a Mercury paxolin undercarriage box, and fit an extra 1/4 in balsa block in front to make a rigid fixing. This box could be made from ply if desired. Cement in specially angled formers A and B. With medium-hard 3/32 in sheet fill in the two bays taking the switches, as well as around the tailplane and fin positions.

The mild steel engine mount was evolved after considerable experiment with dural and other alloy mounts, all of which proved unsatisfactory. Unfortunately there is no suitable commercially-made mount, so that we are forced to make our own. It is not an easy job, but is well worth the effort involved. Set the job out accurately on the metal, scratching the lines with a knife, and cut to shape with a hack-saw and file. Then bend the flanges in a vice, using a light hammer and light taps..." 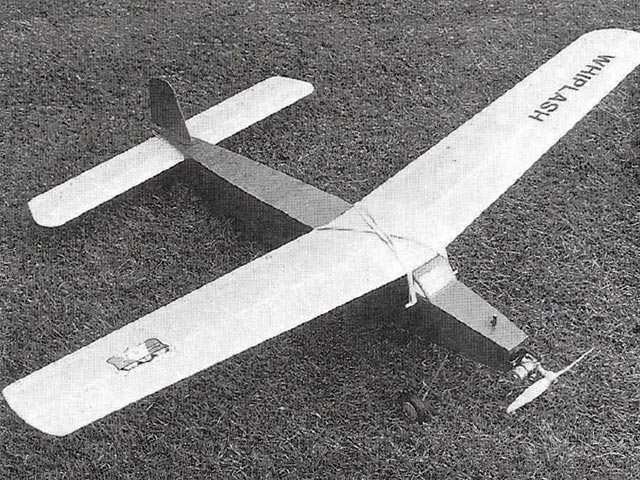