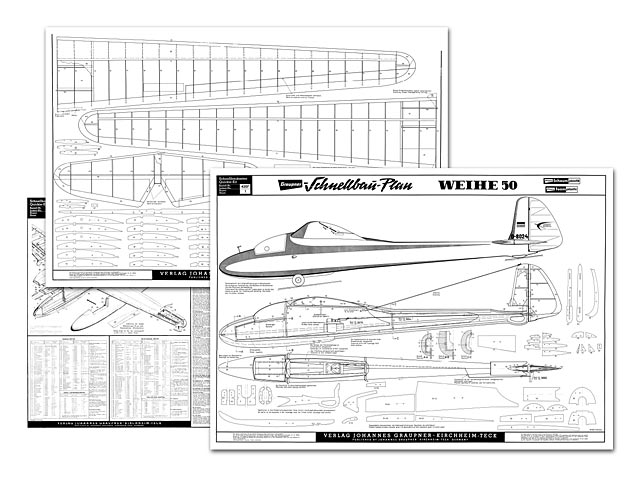 Quote: "Designed by famous sailplane designer Hans Jacobs, the WEIHE decisively influenced the performance of a generation of gliders. Starting with early successes gained at the 19th Rhoen contest in 1938, this remarkable soaring bird achieved performances which belonged in the top notch class and still do. Remember the duration record of 45 hrs 28 min 51 seconds flown by Erich Vergens...

Building a 1:10 replica of this great sailplane which has influenced the design of high performance gliders in so many ways is comparatively easy, as the fuselage, which would offer quite a building challenge if constructed in the normal manner, is simply assembled from two ready-formed plastic fuselage half-shells.

Assembly of the model follows the numbering sequence of the components. Use a perfectly straight and clean board of soft wood as a byuilding bord. Assembly in general is made over the plans, which are pinned down on the building board. Cover same with transparent paper for protection.

The model may of course be flown free flight fashion, if desired, The installation of R/C equipment will greatly add to the fun of flying the ship, however. Steering the rudder via two channels, using a BELLAMATIC is recommended. Do not provide additional functions, no matter how tempting this may appear. The hook-up of the R/C receiver and gear should bewired as shown in the special GRAUPNER R/C prospectus.

The componets of the kit, some of which are either pre-printed or die-cut, should be carefully cut out and sanded smooth..."

Kit instructions, in both German and English. This is sheet 3 of the plan. 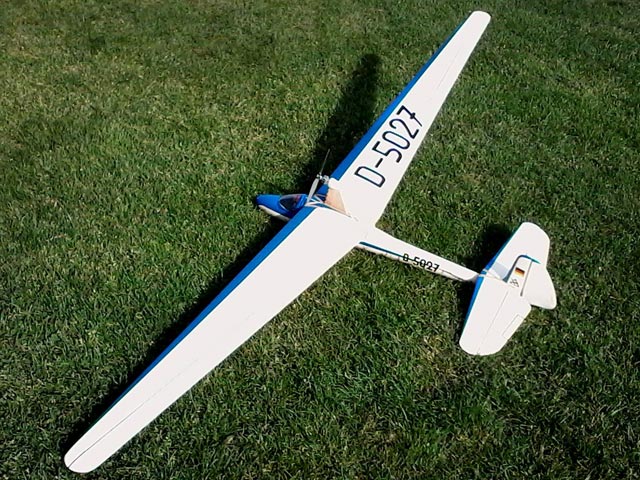 Hallo Mary, hallo Steve - after 50 years I am just building a new one [more pics 006-008]. This time completely made of wood. The fuselage and tailplane are almost finished. As soon as I finish the wings I send new pictures.
BernhardDittmann - 06/06/2017
Hi Steve and Mary, here are acouple of pictures of my old Graupner Weihe 50 [main pic, 009]. Best regards,
tiptipflyer - 19/01/2021
Add a comment