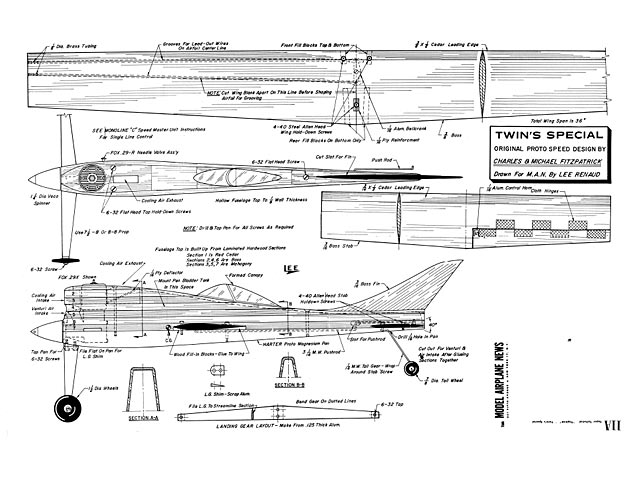 Quote: "The Twin's Special is unique in that it was designed to fly with a monoline or two-line control system depending on the conditions of a particular meet. At least 45% of the contests in the East Coast are held on grass fields. Too often the take-off strip for proto-speed event is 15-20 feet further out than is practical, considering that the flier must be on the pylon within one short lap and that the time involved in this first lap is three to four seconds. The result is a mad dash with little time to concentrate on the position or altitude of the plane which could climb out of control or get rammed into the ground. When further considering that the most important lap in proto speed is the first one, and many proto contests where several planes have similar speed are won by the flier who does not lose these precious tenths of a second on the first critical lap, it be-come apparent that something should be done about it.

Some proto-speed fliers solve this problem by flying only on paved sur-
faces and never on grass, while others fly only two-line ships which gives them the advantage of requiring only one hand for control while the other hand can be holding onto the pylon. In the latter case, you simply stay at the pylon and pluck the plane from the grass with full-up on the controls and level off quickly. No searching for the pylon is required. However, when flying on pavement, the two-line ship is definitely at a disadvantage as two lines have almost twice as much drag as one line.

The Special was designed for use in both pavement and grass flying, using a monoline wing for pavement and a two-line wing for grass. Wings can be unbolted and changed at the field. Our model was built for the '61 season and that year, took two first place-wins; two second place-wins; and two third place-wins. It also won a fourth place on several occasions at the start of the season: During that season, speeds rose from 106.47 mph to 119.16 with the two-line wing. This latter speed, as far as we know, is the fastest recorded with a two-line proto plane..." 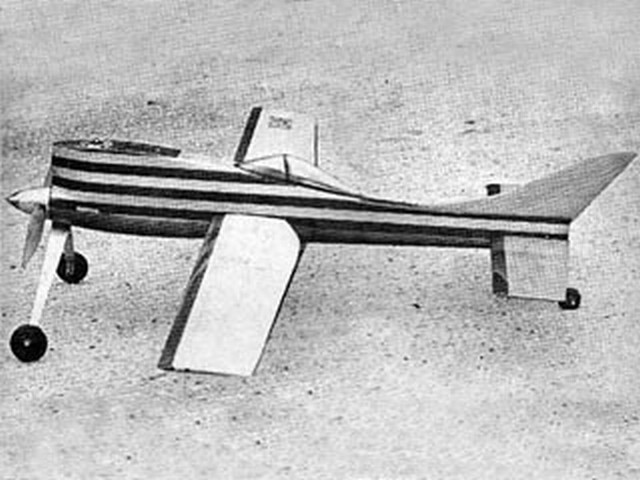