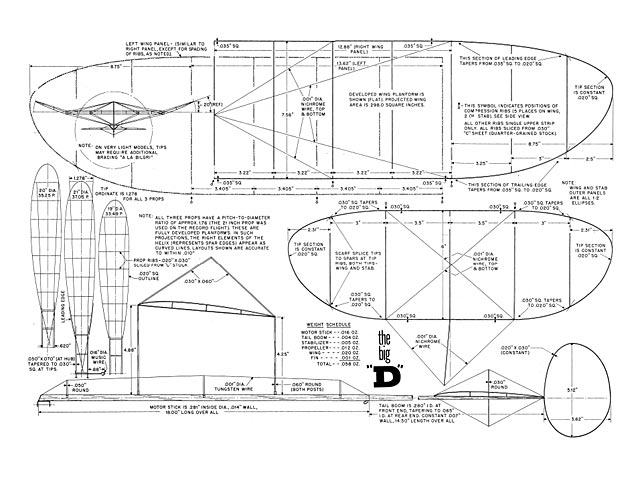 Quote: "Nats Indoor Stout Trophy winner in Class D stick has excellent low ceiling capabilities and, while large for Indoor, handles well under cramped conditions. It can do the job for those who know what Indoor's about!

The Big 'D' was designed with the general aim of attaining maximam duration in low ceilings. Specifically, since the national contest had been flown quite often in the Jones Armory in Chicago with its low hanging lights, I felt that a low ceiling model had a better chance of winning if I could just squeeze out that extra time. The first year (1973) that this model flew at the Nationals, this concept proved wrong. After a 27-minute flight at peak altitude of 50 ft, which was good enough for 3rd, I went for broke and hit the lights. In 1974 the model climbed to about 70 ft, luckily didn't touch the lights, and won the Stout Trophy with a 29+ minute flight. These times and altitudes indicate that the model does have good low ceiling performance.

A secondary criterion which prompters this design was the maximum duration poten-tial inherent in larger indoor models. The high aspect ratio wing was chosen in the belief that it was more efficient and also that with the limiting 200 sq in, the greater span per area would provide better torque control for the large propeller I had in mind. I am satisfied that it works because with no wing offset the 3/16 in washin, washout adjustment controls the 27 in diameter x 52 in pitch propeller with no excessive bank.

The large diameter, high pitch propeller was chosen to achieve the lowest possible rpm while attempting to keep power, and thus weight, within an acceptable limit. The result is 32 cruise rpm on .085 rubber which has proven to be effective. As a number of modelers have commented to me, the flight of this model with its slow propeller, is majestic.

The polyhedral arrangement was strongly influenced by structural considerations. Briefly, the relatively flat center section permitted a large portion of the span to be braced directly from the posts and cabane, a feature which I felt was necessary on a wing of this size, so critical in torsion and bending. This, then, permitted me to use short, unbraced tips which could flex under load wtihout transferring total bending stress to the center section spars as happens with braced tips. Bracing tips 'around the corner,' as is done at the outboard dihedral joints on some models, results in a load transfer condition which can collapse a wing if tip loads become excessive.

The CG position was chosen as a compromise between the very stable 50% position and the extreme aft position of 100%. I think I have tried them all and this setup with minimum wing incidence and negative stabilizer yields very stable flight. Gust recovery is outstanding. Stabilizer and rudder areas and tail moment appear to be within stable limits. I suppose these could be changed somewhat with no noticeable flight change. The low aspect-ratio, braced stabilizer was chosen to keep tail weight low and thereby to arrive at a maximum tail moment with the chosen CG.

Structural Notes. Due to the length and shallow angle of the outer bracing wires on the wing, be sure to allow enough slack to provide for spar expansion induced by humidity variations. The penalty for not doing so is crooked spars and a weak wing. The compression ribs at the tip dihedral breaks are .062 in deep by .029 in thick at their center, tapering to .029 in square at the leading and trailing edges. The wing bracing jig can be quickly and inexpensively constructed of 1/2 in thick foam, backed on both sides with paper. Try an art or hobby shop in your area for a supply. Sharpened dowels pushed into the foam and glued with a white glue serve as legs for the jig..."

Update 09/11/2017: added article from Model Airplane News May 1975, thanks to RFJ. *This article reflects on the Big D's performance in the Nats. It states the first year it flew was 1973, so I have amended the above paragraph (Mary). 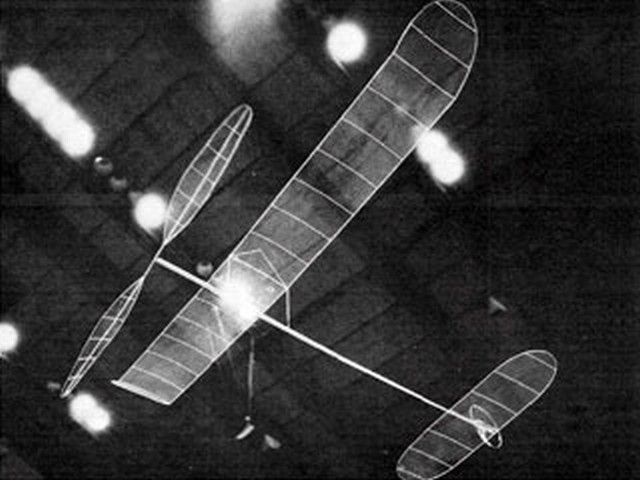