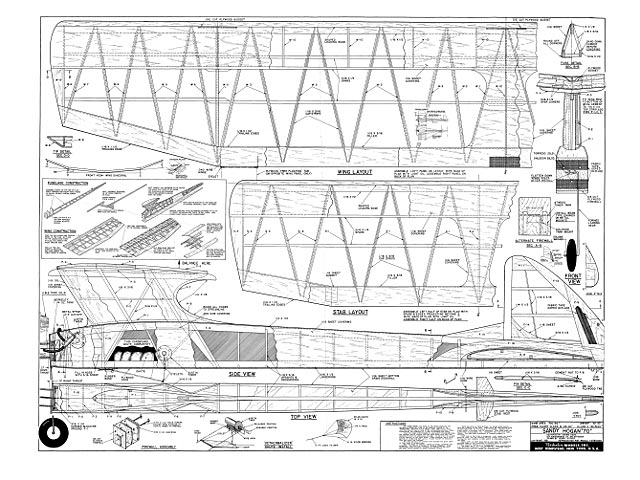 The San de Hogan (oz5350) was first published in Air Trails 1949. This here is a later version, as kitted by Berkeley.

Quote: "The Sandy Hogan, also known as the Super Hogan-70 was designed by Denny Davis and is the improved version of the Sandy Hogan featured in Air Trails Nov 1949 issue. Construction details may be seen in the accompanying sketches. These instructions are primarily as a guide to assembly and flying..."

Quote: "We Test: the Sandy Hogan. By Harry Williamson. Another in a series of impartial reports based on the building and flying of 'name' kits. Valuable tips for free-flight models in general are included. Sandy Hogan 70 is for Classes B and C.

In keeping with their announced policy of producing the finest contest winning designs in kit form, Berkeley Models have just come forth with their version of Denny Davis' Sandy Hogan.

The original has won a very impressive number of places, especially in West coast competition, and now, through Berkeley's efforts, may become a leading contender for top hardware throughout the country. The Sandy Hogan is fairly typical of current western free flight trends, with low wing loading, large stab, and simplified design.

Opening the box reveals a number of sheets of die-cut balsa and plywood parts. In addition to the die-cutting, the balsa parts are die-stamped to aid in identification. A large quantity of the various size balsa sheets required on the lifting surfaces and fuselage, plus pre-shaped leading edges, and a copious supply of strips make up a good-sized bundle of lumber.

The landing gear of 1/8 diameter wire is preformed. There is a small envelope, containing a hard, hubless, solid-rubber wheel; several small brass eyelets; and an assortment of screws for engine mounting and rudder tab. Three sheets of heavy, white Silkspan about 24 x 30 inches in size are included, plus a single drawing by Henry Struck measuring 33 x 43 in. After a careful study of the drawings, a good habit to form, we went to work.

The fuselage, which fairs from a rectangular section at the nose to a triangular section from the rear of the pylon aft, is begun by building a crutch directly over the top view on the drawing. Although the material supplied for the longerons was approximately 1 in too short in this one kit, it was possible, with judicious use of the sanding block to fair the longerons, after assembly, with the trailing edge of the rudder, without any loss in structural strength. The front crosspiece in the crutch is offset to allow for the three degrees right thrust indicated.

The vertical backbone sub-assembly is constructed over the side view of the fuselage and includes the top and rear of the pylon. Going back to the crutch, we sanded the formers to size and inserted them in the proper places between the longerons. The vertical backbone was cemented in place while the crutch was still pinned over the drawings and carefully aligned with the aid of a square and a ruler. Alignment is important because the pylon is a part of this assembly.

The fuselage framework was completed by adding two curved, die-cut strips from the nose to the rear of the pylon and the balsa uprights from that point to the leading edge of the stab. The stabilizer rests on top of the crutch and slips through an opening in the fuselage. The two sides of the crutch are not glued together at the rear ubntil the rudder is fitted in place..." 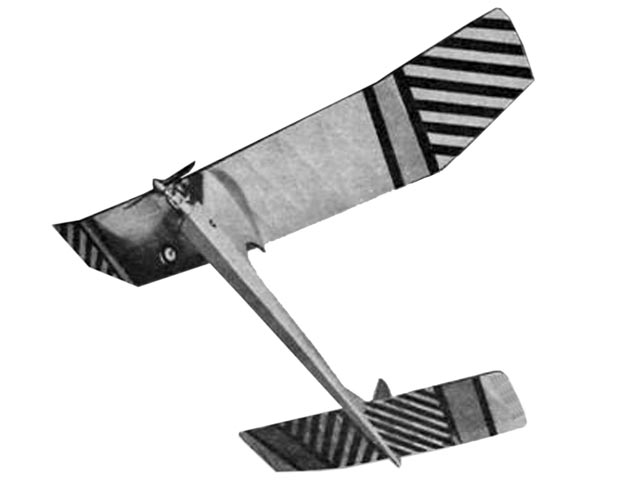