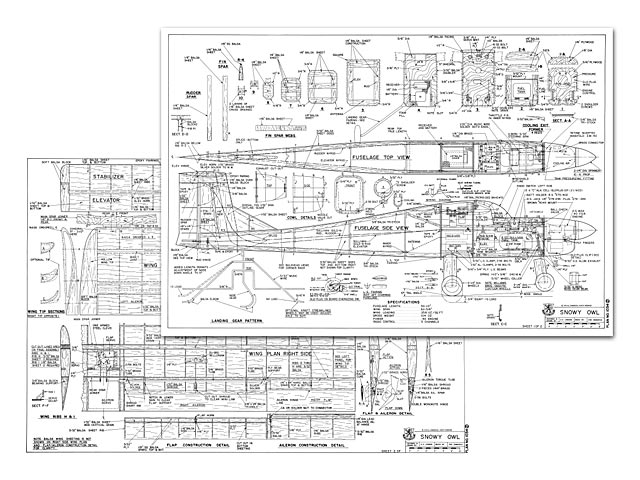 Externally hinged slotted flaps occupy roughly 60% of the wing trailing edge. The remaining 40% is reserved for ailerons. These are top surface hinged, are of modified Frise design, and operate differentially. Down travel is one-third of up travel.

Horizontal and vertical tails have control surfaces that are similarly 'one side' hinged which also seals the joint; control horns for all surfaces are internal for reduced drag. This is the fifth of the author's designs to very successfully employ a form of 'Torsion Bar' suspension of the main gear, and a vertically sprung nose wheel. The engine cowling is a two piece ducted unit of epoxy and fiberglass. The small air intake and outlets provide adequate cooling even on very hot days, and reflects a 'turbo-prop' appearance.

The horizontal tail plane is 'T' mounted where it is out of the prop slipstream and most of the wing down wash. The canopy, composed of windshield and fuselage forward top deck, is removable, exposing all five servos, fuel tank, on-board glow plug energizing battery circuit, and nosewheel steering linkage. Similarly the lower engine cowl is easily removable providing access to carburetor and glow plug.

This model, with its long tail arm, generous dihedral and tail surfaces is a superbly stable flier (Photo 4). At half flap deployment, it takes off with a run of twenty feet. Climb-outs are at a 45 degree angle. Landings with flaps fully down are at 'walking speed' (Photo 5). Both forms of drooped wing leading edge ahead of the ailerons permit unusually high angles of attack without any tendency for a wing tip to stall and drop..." 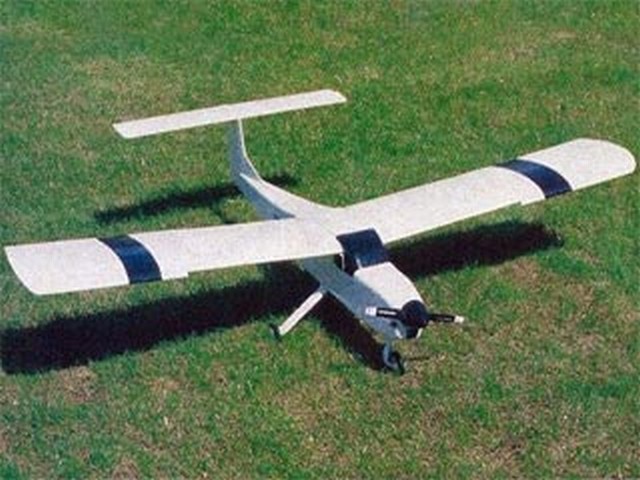