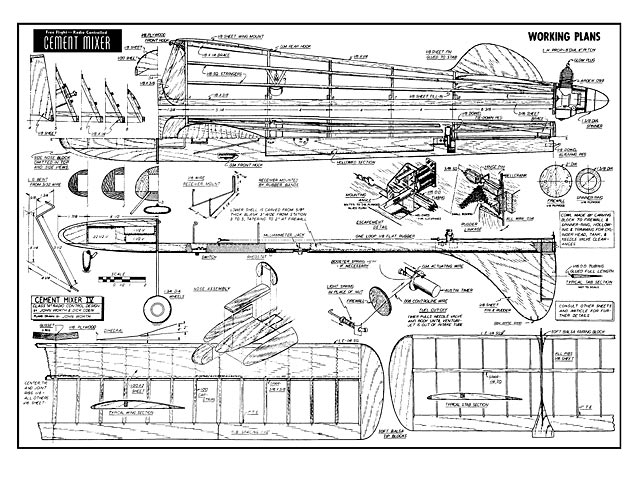 In a postwar boom that has seen model aviation's greatest expansion, probably the most important progress was made technically. Among the advances, which included the development of ignitionless engines, super fuels and jet power, the latest improvements in the field of radio-control have at last bought the sport within the reach of the average model builder.

In past years, radio-controlled models were generally the product of considerable labor and experimentation which combined the technicalities of radio and model design, with attendant problems of space, weight and construction. Pioneers, singly or teamed together to pool knowledge and experience, plodded steadily with varied degrees of success and were usually recognized through the pages of the model magazines. Readers become acquainted with such names as De Soto, Weiss, Lanzo, Sweeney, Walker, the Good brothers, and others.

The Goods, Walt and Bill, are the best known of these 'oldtimers' and are credited with doing the most to popularize radio-control. Through their Nationals' championship performances, their published articles on the subject, and their official AMA activities, the Goods proved that the sport had come of age and was ready for widespread acceptance.

Meanwhile, other enthusiasts labored in comparative obscurity and only now are it accorded recognition as their efforts bear fruit on the model market. One of them, Ed Lorenz, somehow just didn't become familiar to the model world. However, long overdue credit is at last coming to Ed for his practical application of radio to the smallest of powered models.

Ed's system is currently being marketed under the name 'Aero-trol' and has been used regularly in tiny Atom and Arden powered ships, some of which were converted from standard scale rubber-powered kit types. This is possible with Aero-trol because the unit's extremely compact design is the smallest and lightest commercially available. The flying component, with a total weight including batteries of just under six ounces, makes possible the adaptation of radio-control to conventional models

Designing a ship specifically for radio is no longer necessary as Aero-trol may be considered similarly with accessories such as the flight timer, with the simplest of eltsign require-ments called for The unit may be easily installed and operated with the barest knowledge of a few simple radio facts which are contained in the accormpanying. instruction booklet, end with little more cgmptication than is found in conventional ignition systems. Our own introduction to the radio field revealed that aniyone capable of building a successful gas model can fly with Aero-trol.

Originally inspired by the atiriouncement of the full scale 'Mixmaster" design by the Douglas Aircraft Company, the first model pusher of this type was built to test the soundness of the power arrangement. Indications wete favorable and a second 'cleaned up' version was designed to improve performance. Before being flown, however, the advantages of converting to radio-control were realized, and subsequent rework evolved the third version.

The desirability of minimizing the effects of exhaust spray and fuel seepage seemed obvious for radio work and further food for thought was Walt Good's strong recommendation that radio batteries be mounted forward or below the receiver unit to protect against impact damage. The latter was particularly suited to the basic pusher design requirement that sufficient weight be distributed forward to obtain a conventional CG position.

Additionally, the probable gain in aerodynamic efficiency due to less turbulent airflow with the pusher layout was intriguing enough to develop the idea more fully. It was reasoned that less power would be needed than usual in a ship of similar size and weight..." 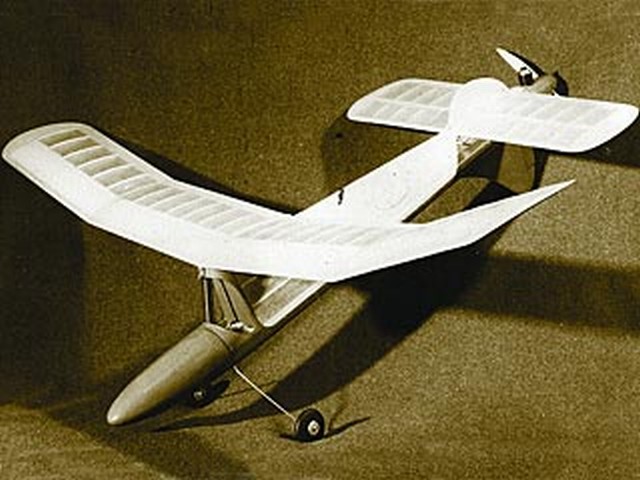 Thanks to JosephW for finding the photo of completed Cement Mixer model.
SteveWMD - 12/02/2013
Add a comment