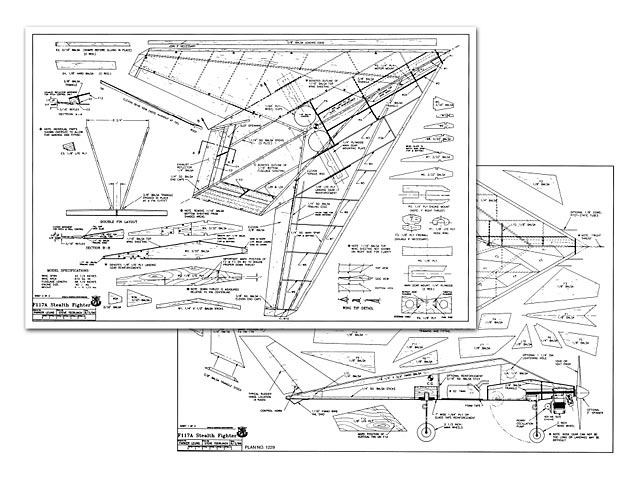 If this article was published a few years ago. I bet most of you would question the designer's knowledge of aerodynamics or RCM would simply reject this article. It's no surprise that people always ask me if it can fly or how it performs. Happily, I can usually demonstrate a perfect flight, which is always worth a hundred words.

A few years back. I designed a .40 size Space Shuttle (oz5890), of which I believe no one had a similar design at that time, simply because it is an orbiter rather than an airplane. This design was published in the February 1992 issue of RCM, Plan #1110, Since that time, I have been planning for another special model. Many ideas came up such as the YF-22, YF-23, F- 117A, SR-71, and the B2. They are the most advanced aircraft although some of them are now history. I liked the Y F-23 because of the butterfly type tail. So I started working on the drawing. Unfortunately, it lost to the F-22. I did study the F-22 but, after the Gulf War, the F-11 7A drew my attention again and decided it would be a real challenge if I could build a model that Ries as well as the full-scale one with all the parts 'off the shelf.'

Needless to say, there were no plans or kits available then, so I started to collect photos, drawings. and plastic kits in 1993. I learned that Yellow Aircraft had been working on a ducted-fan version which flew successfully. This didn't surprise me because this company always does its best. This twin ducted-fan model is certainly top of the class. As a sport modeler myself, I prefer a relatively easy-to-build, easy-to-fly airplane, and most important, it must not dig deep into the wallet.

Since then, additional studies revealed more problems coming. but I like to work out any special, or hidden problems before they show up in the air. The fuselage is assembled by many irregular shape panels and the airfoil section looks like a diamond for starters! Furthermore, the wing is highly swept back which means it's easy to tip-stall, so how do we prevent it from happen-ing at low speed?

As an average modeler, I couldn't afford any expensive experiment., lnstead, I made a few paper airplanes with highly swept back wings. I believe that if it is designed properly, it is not easy to tip-stall. On the other hand, l purchased a used .40 size airplane called 'Illusive,' which was designed by my friend, John Cook. One of the major characteristics of his design is that he employs a 'diamond' type airfoil section to all his airplanes. This type of airfoil section was once adapted for pattern ship's stabilizer in the 1970s, such as Saturn Compensator, etc. It seems that there are certain advantages that we might ignore. The Illusive I got was quite heavy because the builder used door skin plywood for the fuselage sides. But once she was airborne, she could keep floating at 1/3 throttle, then took off and landed as a conventional aircraft. The only difference in this airfoil is just the appearance, not the performance.

Since then, I gained more confidence with this project. Then I built a small size free-flight scale model for further testing and also to practice the construction. I found that it was very unstable around the pitch axes. The CG point was so critical that it either went nose up or into a dive. At this point, I needed some sort of breakthrough. When I designed the Space Shuttle, I made two movable side intake flaps to make it flyable. In this case, I noticed there are a pair of lips attached to the narrow exhaust slots. The lips (I call them exhaust reflectors) are reflexed upward slightly and are supposed to minimize the infrared image.

I cut two slots underneath the fuselage just in front of the exhaust slots (Patent pending) such that the bottom side air current is sucked into these slats and pass over the exhaust reflectors. The principle is very simple. The exhaust reflectors become very aerodynamically effective which, in turn, improves pitch stability and when coupled with elevons, also provides pitch control. Furthermore, this configuration highly improves the aerodynamics of the fuselage. The slots are hardly visible in the air and thus do not affect the scale appearance. Later testing proved that this concept works well.

In order to prevent tip-stall, the swept back angle is reduced and wash-out is built into the wing..."

Quote: "Hi Steve, I made these scans a couple of years ago for a guy who had a short kit but had lost the plans and magazine. I have just 'discovered' them again and cleaned up the article scans a bit, my original effort left the pages a bit dark. I thought I may have sent them to you, but can't find them in the database, so guess I didn't. I see you have a couple of Parker Leung plans but not this one." 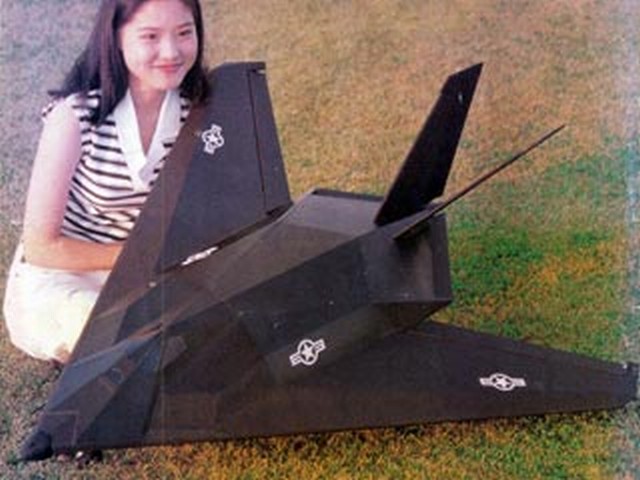