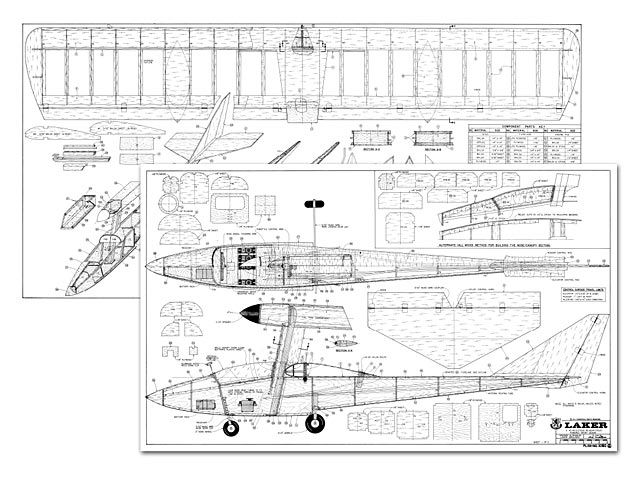 Quote: "From the designer of the North Star comes this super .40-.46 powered sport amphibian. Great for land and water. Laker, by Laddie Mikulasko.

Allow me to present to you a simple airplane which I hope will give you a lot of pleasure, flying from any surface. For me, designing a model like the Laker is a continuous challenge and fun. Usually, a lot of ideas are in my head, for that next project. Laker is no exception.

During the last five or six years, I have built several flying boat type models. All of them flew well, but some of them had a hard time taking off, or building them wasn't the easiest thing. For this model, I set three goals: Good flying characteristics, ease of construction, and good looks.

I made a new sketch, utilizing the wing design of the Easy-100 Trainer (oz8534). The fuselage shape was made as streamlined as possible. The engine was placed on a high pylon in tractor configuration for less hassle in balancing the model and a simpler arrangement for throttle control. The height of the pylon was made high enough to clear the canopy in the case cf a 4-stroke engine and big prop.

The only thing I wasn't sure of was the amount of positive thrust angle to have on the engine. To be safe, I put in about 6° which I found to be too much an the test flight and I reduced it to 4°. Initially, controlling the throttle posed a problem until I looked at the way a nose wheel is steered. This gave me an idea for transferring control from the servo to the engine inside the pylon.

Sig lite ply was selected for the fuselage sides, to simplify building. To minimize the problem of water getting into the fuselage, the only opening is under the canopy hatch, in front of the wing. The wing sits on a sealed, sheeted surface. At any time during taxiing or take-off, the radio compartment is well above the water line and all of the spray is kept under the wing. My Northstar (RCM March '86) had the same arrangement. Because of this set-up, the hatch does not have to be watertight.

At rest, the stabilizer sits close to the.water, but this has not posed any problem. Of course, NyRods have to be used for the elevator, rudder, and aileron controls. Small sponsons are attached to the bottom of the wing. The model sits level on the water surface. I believe this to be the best arrangement for a sport type flying boat.

Over the years, I have observed too many flying boats with sponsons situated high above the water surface. Consequently, the craft leaned to one side while taxiing. Then, on take-off, these models would try to swing to the low side. The Laker, in contrast, is extremely easy to steer; first because it rides level and, second, because part of the main rudder is in the water all of the time.

Take-off is so uneventful it is almost boring. I can almost guarantee that if you build the model according to the plan, it will lift off in less than thirty feet. Provisions were made for a removable tricycle landing gear because I wanted to do some hard surface flying as well.

I would recommend that you cut out most of the parts accurately ahead of time, and drill and cut out all holes where needed. For an experienced builder the plans and parts will fall together from here on. Because I would like to see this model built by beginners as well, I will be describing individual building steps from here on with the aid of the numbers assigned to the individual pieces.

First off, cover the plans with a sleet of clear plastic so that you will be able to build your model on top of them without destroying the drawing..." 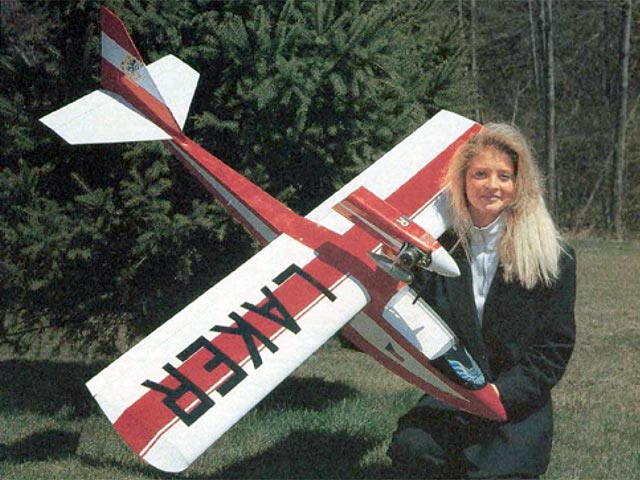 Hi Steve, Here is the building article to go with the Laker plans just posted on Outerzone. The plan itself is clearer than the one I had, so thanks for that! I like clear, high quality plans.
SteveB - 21/01/2016
Add a comment