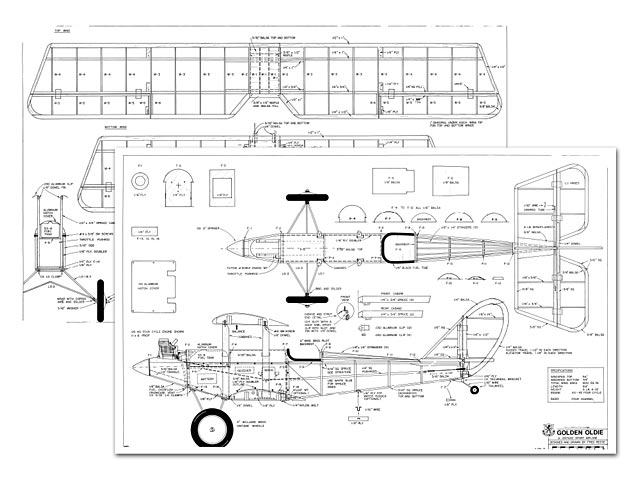 Quote: "The Golden Oldie is not scale, but rather is a fantasy that grabs the character of the 1920's. The design is ideally suited to the new .40-.45 four cycle engines. This big, old biplane has really been a lot of fun. It flies slowly, realistically, and it is quiet. It is not the misplaced whine of a high revving engine, but rather there is a low throb as the Golden Oldie cruises down the runway. The power is an OS FS .40 four cycle engine. The slowness is deceiving because there is power to pull the biplane easily up through a loop without seeming to change speed. Perfect hammerheads are easy. The four huge ailerons give precise control, even at low speed, yet they are not sensitive. The Golden Oldie is incredibly easy to fly as it is very light for its size. Lightness is the secret for getting low powered models to perform. The Golden Oldie has a total wing area of 800 square inches, yet it weighs only 5-1/2 pounds.

This is my first experience with a four cycle engine and I am really pleased. The four stroke engine runs much slower than the usual model engine, but has more torque, which allows it to swing a larger propeller. Four stroke engines are much quieter than a muffled two stroke engine. Consequently; four stroke engines can be flown in places where other engines would be a noise problem.

The Golden Oldie is one-third Jenny, one-third Gypsy Moth and one-third fantasy. I wanted an airplane that looks real and flies like the real thing but I did not want to be confined to a fixed scale design and color scheme. I wanted to be able to express myself and have a flying machine that looks right. I also designed the Golden Oldie to be modified. You may prefer a Sopwith or Rumpler rudder and military markings. Any two inch to the foot accessories would be the right size. You could add a second cockpit and dummy engine cylinders and machine guns that are available from Williams Brothers. If you change the shape of the tail surfaces, maintain the approxmiate areas and do not reduce the span of the stabilizer or the height of the rudder. As shown, the Golden Oldie is very stable, and will be as long as the overall sizes are not changed.

The Golden Oldie was designed for the new .40-.45 sized four cycle engines as currently made by OS, Enya and Saito. They are quiet and economical to run. An 11/6 gives the best performance with these engines. A .60 four cycle engine would fly the Golden Oldie nicely, but they are larger and heavier and would require changing the design of the front. The firewall would have to be moved back about 1 in so as to not make the model nose heavy. Any two cycle .45 to .60 engine could also be used without changing the design and would give excellent performance. The four stroke engine is ideally suited to airplanes that have light wing loadings and are intended to fly slowly like the Golden Oldie.

Since the Golden Oldie is not scale, I designed the rigging and struts to be as simple as possible, yet appear realistic. The monofilament rigging is not really necessary, but the outboard wing struts are. The struts maintain the spacing between the wings and the aileron linkage.

Construction: Fuselage: The basic fuselage sides are made from 3/16 square spruce and 3/16 sheet balsa. If spruce is not available, 1/4 in square balsa could be used. The basic side structure extends from the firewall to the rudder post. The side is sheet balsa with a 1/16 plywood doubler from the firewall to the cockpit and 3/16 square spruce aft of the cockpit. The area under the stab is filled with 1/8 or 3/16 balsa for the pushrod exits. Build two sides over the plan using white glue. Use waxpaper or Saran Wrap to protect the plan. Glue the 1/16 plywood doublers to the sides with Zap or contact cement. Be sure to make a right and left side. Glue the 3/16 balsa nose pieces to the sides raising the front 3/4 in. This is the right nose taper to fit a 2 in spinner. 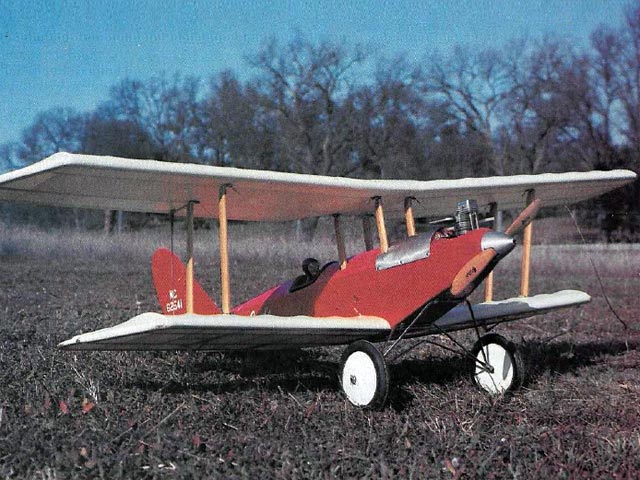 I put about 6 hours of work into restoring and cleaning this plan from the original scan. See more pics 004 for before-and-after screenshot.
SteveWMD - 18/01/2016
Wow, nice job. That was a rough plan to work from. Was the scan from a taped up magazine or full size plans? Reminds me of some of the Jack Headley blueprints in the collection at the NMAM in Muncie. The difference is no tape, but rather severe yellowing and inconsistent densities overall. Jack's 'Tangerine J' was a case of Gimp restoration. I gave up counting the hours I spent on that. That reminds me I need to replace the posting on RCG (rough in a couple spots) with the new work.
DougStarwalt - 18/01/2016
Steve, I am very impressed by your restoration of the Golden Oldie plan. I got the original as part of an RC collection that I purchased. It's such a mess that I was reluctant to build on it, but now I can print a very nice copy from your pdf file. Thanks for your effort.
RobReynolds - 18/01/2016
Thanks. Doug this was a scan from a fullsize plan, thanks to balsaworkbench and Don at Eureka Aircraft. It's nice to work on a plan that looks badly messed up but is not so bad you can't work out what was underneath to start with.
SteveWMD - 18/01/2016
Is the magazine article available for this one?
DaveP - 15/06/2017
Not yet, Dave. Can anyone help?
Mary - 15/06/2017
Added now :)
SteveWMD - 15/06/2017
Add a comment