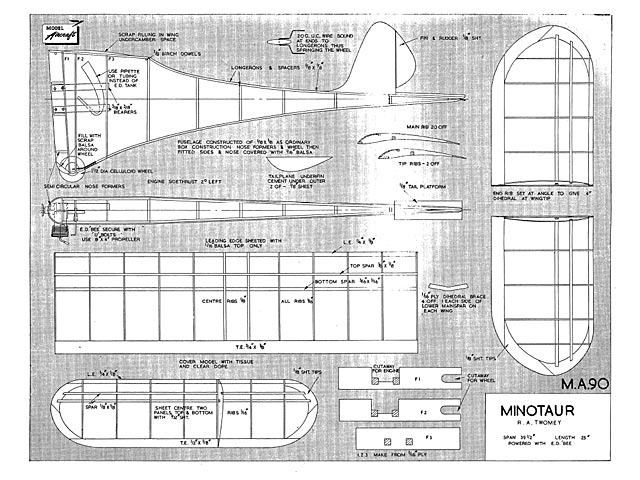 Quote: "THE original 'Minotaur' so the dictionary tells us, was a 'fabulous monster' of ancient Greek times. This model being both noisy and monstrous (in shape though not in size), though far from fabulous; the name seemed appropriate.

This particular Minotaur, unlike the original Greek beast, was designed as a contest power model for the popular E.D. Bee 1cc diesel. It has proved satisfactory in every way and offers a change as well as a challenge to the larger model. The need for a cumbersome undercarriage is eliminated, and props are saved, by fairing the sprung mono-wheel into the fuselage. The tailplane underfins give a firm three-point stance, and on its first trials the Minotaur left the deck with an ease that startled even the poor designer.

The climb is near-vertical, but it is on the glide that this model really scores, thanks to the wing section, which is from the well-known Swedish Sigiard Isacson series. Ratios of 7 and 8 : 1 in still air are common, and it was not long before the Minotaur had pushed the Ampleforth College club power duration record successively to 7 min. 43 sec. and 10 min. 31 sec, o.o.s. Later the ratio record was also smashed, when the model disappeared into cloud after 9 min. 15 sec. on a 15 sec. engine run. (Ratio 37:1). Needless to say, the occasion was a trimming flight prior to a national competition! The Minotaur was not recovered in time for the event, but when it was found it was discovered to have stayed in the air for 1-1/4 hours. (Work that ratio out!) In addition it had established a new club distance record of 11.7 miles." 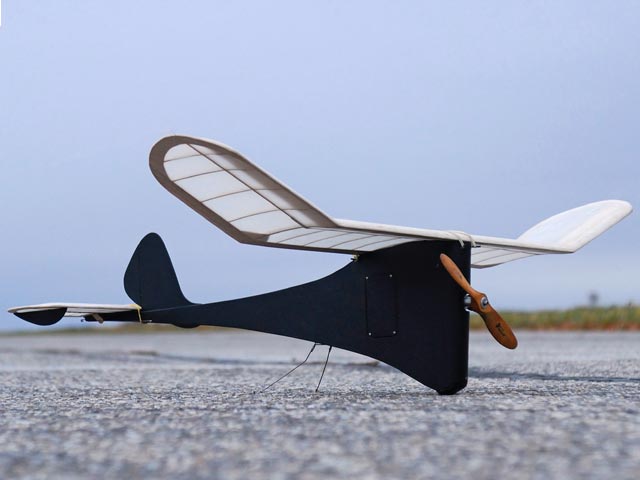