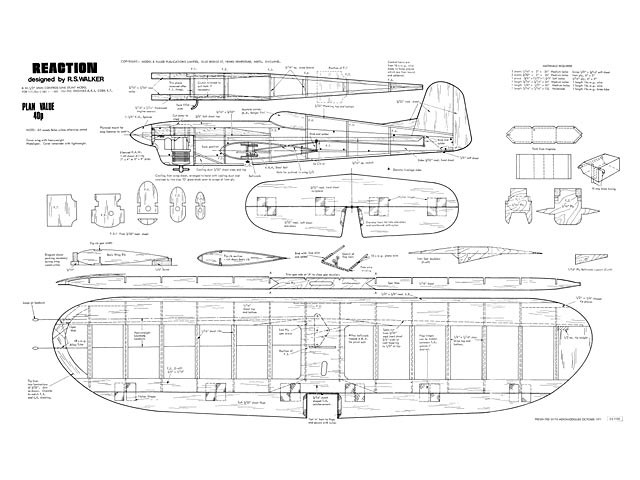 THE DESIGNER, a Senior Physics master, who runs a school model aircraft club, took a group of four boys down to the '70 Nationals at Hullavington to compete in the Junior Kit Contest. Their success was not great, due to a lack of experience in trimming free flight models, but they all enjoyed the principle of a juniors-only event. With the publication of the SMAE Junior Control Line Stunt rules for the following year's Nationals, their enthusiasm was renewed, but a suitable model was needed - the result was Reaction, a very manoeuverable little aircraft, combining much 'big stuff' acrobatic practice. Indeed, if the model looks familiar, it is due to its heritage being largely based on Bill Morley's Thunderbolt (oz2219) design APS No CL/587

It was designed to be as crash-proof as possible, whilst retaining light weight construction for maximum performance, and to be good-looking. The structure incorporates many lessons learned from other designs, and throughout avoids abrupt changes in strength - a point which can cause damage in a minor 'incident'. Perhaps the construction is a little more involved than is normal for a model of this type, but care is repaid by a really aerobatic, long lasting model with a very tight turning radius, which is useful in getting out of trouble!

With this model, many of the members of this school club learnt to fly aerobatics, and some eight Reactions were flown at the '71 Nationals, where Andrew Gibson placed highest at fifth. Altogether very much a school-team effort, even some of the photographs on these pages were taken and processed by a member of the fourth form, S Appleson.

Building starts with the wing. The spars are cut from a sheet of straight grain, medium 3/32 in and the 1 mm ply doublers glued on with PVA taking care to get a 'top' and 'bottom' spar. Ribs are made by the sandwich method, port and starboard separately, remembering the lead out holes in the port set. The TE pieces and spar web are cut from medium hard quarter grain 1/16 in sheet. The 1 mm ply web reinforcement is glued on with PVA.

The tips are made next; the inboard one from two layers of 3/32 in with the lead-out tubes sandwiched in between and the outboard from hard 3/16 in with tip weight sewn and glued on. The bottom mainspar is pinned down flat on the plan and also the bottom TE using the scrap packing shown on the plan.

The basic wing ribs, with the exception of the two root ribs, are glued to the sparweb, after which they are glued to the bottom spar and TE. The LE is added next on its scrap packing; then the outline is completed with the tips and shaped tip ieces. The TE reinforcement and root ribs are added next..." 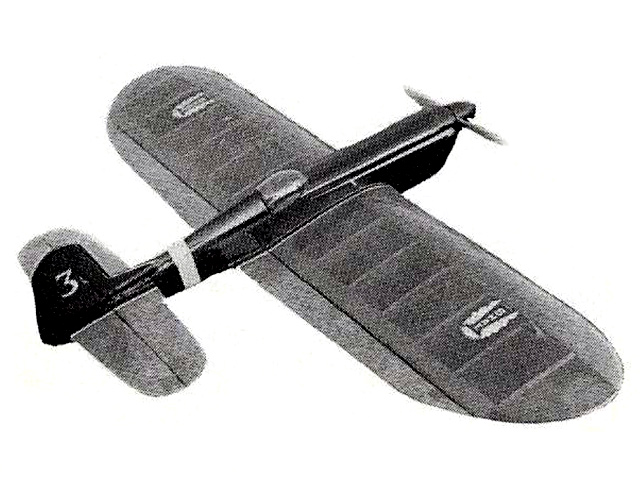 Hi I'm Eddie Wagner a fellow Physics teacher of Bob Walker at Allerton Grange school. I actually saw Bob drawing the plan of his Reaction model almost 50 years ago, it certainly has lasted the test of time! Well done Bob. If you are reading this comment, could you tell me if you still hold the 1 mile record for model aircraft. Another 'Well done ' if you do! Hope you and your family are well. Regards, Eddie PS I never knew 50 years could go by so fast!
Edward Wagner - 16/06/2020
Add a comment