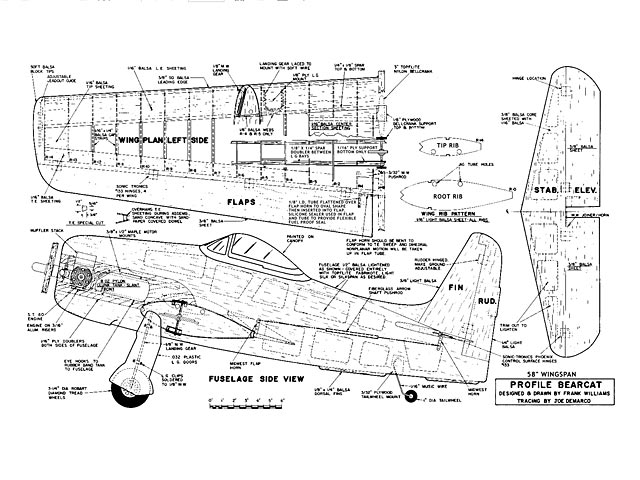 Quote: "This airplane started out as a quick-to-build testbed for checking if side-mounting of the .60 engine, with the cylinder inboard, would improve power characteristics for CL Precision Aerobatics purposes. A lot of heads were turned when it was flown in the 1982 National Contest. Profile Bearcat, by Frank Williams.

IF NECESSITY is the mother of invention, then the Profile Bearcat was 'born' from a need for a flying engine testbed to exercise the merits of a rather wild idea I had about engine performance in a Stunt ship. I wanted to test an engine mounted in the profile position, but not the standard profile setup with the engine mounted facing outboard. I wanted the cylinder facing the inside of the circle. As I will try to explain later, I felt that the performance of the engine was being adversely affected by the standard Stunt ship's inverted mount. The inboard cylinder placement was to let centrifugal force keep the glow plug free of oil and, thus, promote better ignition characteristics and, hopefully, a better Stunt run.

This all came about at the end of the 1981 flying season. I felt I needed a steadier engine run than I was getting. Oh, I had plenty of power with the ST .60 I was running - power to spare, really. But it just wasn't sounding like the engines of the top 20 fliers at the Seguin Nats. To my ear, the 'top 20 sound' is one that, in the round maneuvers, rarely breaks at all - a solid four-cycle all the way around. For the four years I had been running the ST .60, I had never been able to run quite in this manner. I wanted to he able to run a big prop real slowly.

A full built-up fuselage for this testbed airplane was out of the question. I needed an airplane that would be fairly quick to build, one that I knew flew well, and most importantly, had easy access to the engine, tank, and associated plumbing. It had to be a profile. Since I can muster enough energy to undertake only one Stunt ship a year, I was risking a whole season on something that might not work at all.

In 1978 I had built a full-blown molded fuselage Rabe Bearcat (oz5171). It was about 56 oz, had a ST .46 for power, and sported a nice enough finish for it to receive 16 appearance points at the Lake Charles Mats that summer. The plane flew great. Unfortunately, I wasn't its equal. I had been seriously flying Stunt for only two or three years at the time, so my performance was not that good. Even so, for my first Nats, I was satisfied.

Of all the Stunt ships I've flown, the Bearcat is different. No other plane has shown the inherent well-damped dynamic response that the Bearcat possesses. It will fly out of a hard corner without a trace of a bobble or overshoot. No matter how hard you hit the corner, it just turns and lays there. I have always felt that the Bearcat has benefitted from its short nose and tail lengths, resulting in a lower-than-normal pitch inertia. I feel that this lower pitch inertia, in comparison with most of today's Stunters, contributes to the superior damping in pitch that the Bearcat possesses. Also influencing the pitch dynamics are items like the Bearcat's flap size and, most importantly, CG placement. The more rearward the CG can be located, the better the pitch damping (up to a point, of course). This must be coordinated with line spacings, control throw, etc, to achieve the perfect feel.

For several years I had been wanting to try another Bearcat. Why not do it in my testbed profile; the tall fuselage would hide the muf-fler or exhaust stack that would be pointing, up instead of out the inboard side, I reasoned.

The Profile Bearcat is basically a copy of the Rabe Bearcat (oz5171), though I pumped up the profile view to full vertical scale (if you're going to have a profile fuselage that big, you might as well add in the extra inch to make the scale correct). The stabilizer and elevator are slightly increased as per info from Ron Harding, who was also the source for the airfoil, trailing edge sweep, and flap size..."

Steve / Mary, Here is a copy of the Profile Bearcat by Frank Williams. It is a 58 inch wingspan airplane for S.T. 60 sized engine. 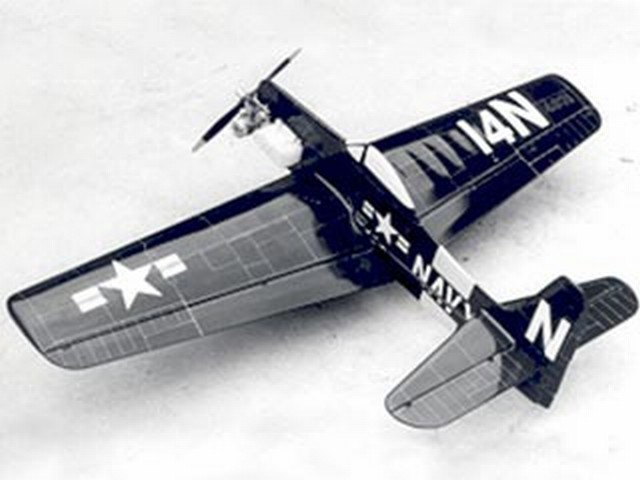