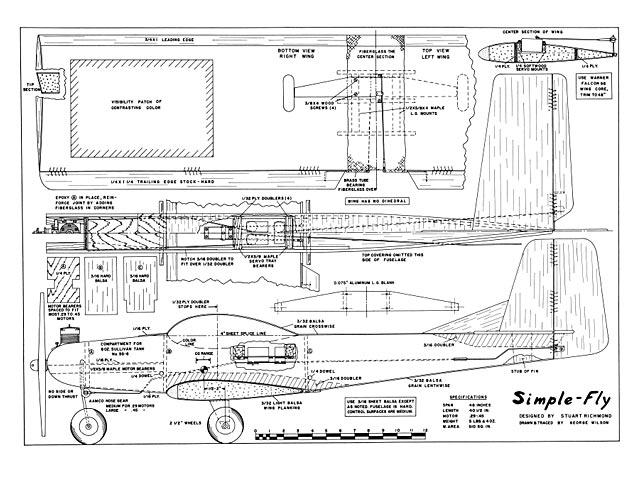 Quote: "Now that you have soloed, here is your first low-winger. Flying is mild with a 29 but wild with a 45. Simple-Fly, by Stuart Richmond.

Y TWO OLDER SONS, now 11 and 13, had been flying H-Rays (oz658), S-Rays (oz3143), a Mambo Special (oz6400), etc, quite successfully in competition, when they decided they wanted a hot, contest-type airplane. I agreed that they were ready for ailerons and more power.

The design concept for the new ship was simple. It was to have a minimum number of parts and no compound curves (to make covering easy). Dihedral was ruled out since it detracts from many maneuvers. A semi-symmetrical airfoil was needed for grass field takeoffs and steep landing approaches. High wing-loading was required for snap maneuvers, easy spins in either direction, upright or inverted, and for windy weather flying. Above all, the plane had to be simple enough for a youngster to build and had to groove well for simple flying in less than highly-experienced hands.

The design concept proved completely successful, and the prototype flew so well that I took it for myself. The boys had to build two more! I started with an Enya BB 29, progressed through a 35, and now all three of us fly with Enya 45's.

The Simple-Fly is a highly competitive contest or sport ship, which performs all the standard maneuvers as well as some wild ones the book hasn't even seen yet. Don't let those simple lines and that apparently drooping wing fool you. The Simple-Fly is a true joy in the air.

Construction. Build strong. The model must not weigh less than 4-1/2 lb, so don't spare the strength!

First select the engine, clean it well, and bolt onto it the two engine bearers of 1/2 x 5/8 in (or larger) hardwood. Use no side thrust or down thrust. Overall width must accommodate the SS-6 fuel tank in its location. Install bulkhead A and bulkhead B, along with the nose gear mount.

Next, epoxy the 1/32" or 1/16" plywood fuselage doublers to the 3/16" hard balsa fuselage sides. Saw or cut out the two sides. The piece of balsa cut from the bottom rear of the sides is glued on top of each fuselage side to form the cabin area. Epoxy the engine/motor bearer, bulkhead A, bulkhead B sub-assembly onto one fuselage side and line it up carefully (see plans), When set, epoxy the other side in position and align it so that all is square.

Install bulkhead C and join the two sides together at the tail. Epoxy the 1/16 plywood floor in place for the gas tank area and remove the engine. Next install the 3/16 rock hard balsa doublers inside at the wing mounting area and at the rear of the fuselage.

Cut out the stab and fin and epoxy in place. The stub of the fin goes down through a hole in the center of the stab, wedges between the tail fuselage doublers, and stops at the bottom planking. Add the top and bottom planking as shown and sand well. Epoxy small strips of fiberglass cloth to reinforce all joints of bulkhead A and the area of the engine bearers forward of bulkhead A. This extra effort takes only a few minutes but provides great strength where needed.

Cover the tank area completely with epoxy , add a coat or two of colored fuel-proof dope to the tank compartment and engine area. Then MonoKote or cover as desired. Those who haven't used the plastic type of covering will find this is a perfect ship for trying it. If you goof a little, just peel it off and start again. No smell, no mess, no fuss, and what a shine!

Install mounts for the servos or servo tray (see plans or photo). Put in the engine with 4-40 bolts or larger. Hinges for rudder and elevator are added now. We use dacron 1/2A U-control lines and sew figure-8 hinges for trouble-free operation. Finally, install the pushrods.

The wing is a Warner Industries Falcon 56 core (or equivalent) joined with epoxy and with a full-depth piece of 1/4 in plywood. Use no dihedral in the wing. The front of the aileron servo simply screws into the top of the 1/4 in plywood wing joiner. Measure the aileron servo and carefully gouge out the styrofoam to install a 1/4 x 1/4 in or larger hardwood strip. The rear of the servo is screwed in place on it.

Turn the wing upside down and gouge out the styrofoam to accept the 1/2 x 5/8 in (or larger) hardwood into which the sheet aluminum gear is screwed. The front of these gear mount strips is epoxied to the wing joiner. The rear is anchored by a 1/4 x 1/4 in (or larger) span-wise mounted piece. Measure both the gear and the position of the gear-mounting holes and write them down. After covering, it will then be easy to attach the gear in place with 3 3/8 screws.

If the gear ever should be pulled loose accidentally, simply use the next larger size of screws to reinstall it. Trim the trailing edge of the cores according to the plans. Cover the wing with light or medium-weight 3/32" balsa, or its equivalent, 48" long. Center it carefully on the core and attach with Core Grip or a similar contact adhesive.

Trim the wing's leading edge to accept the balsa leading edge piece and carve it to shape. The leading edge curvature has much to do with the way the Simple-Fly performs, so be slow and careful at this point. Cut off and throw away the styrofoam which extends beyond the 48 in planking on each tip. Then add the tip sheeting..." 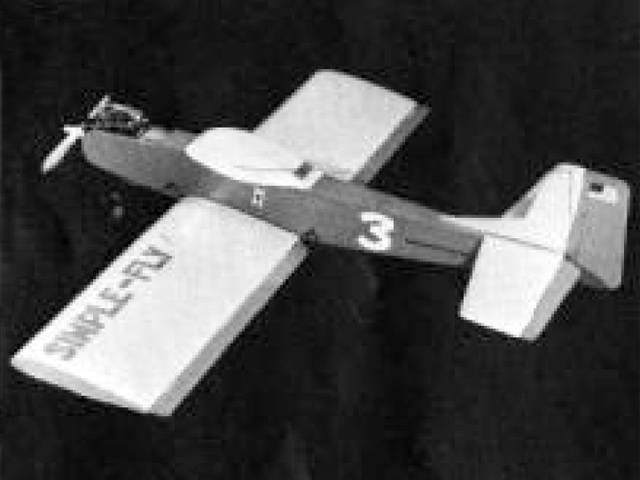