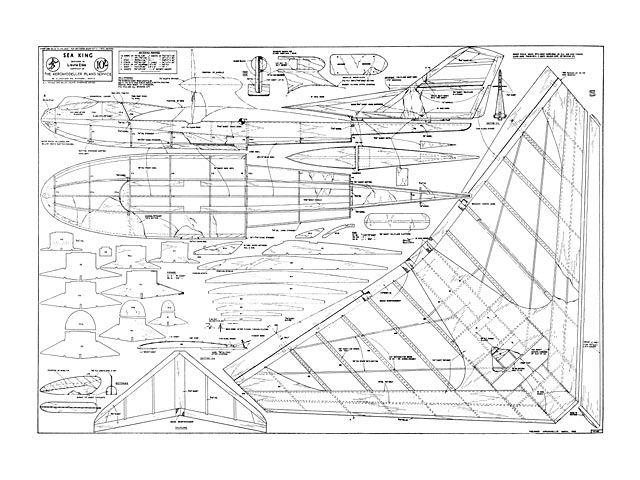 SEA KING is the perfect 'follow-on' for all who have built and enjoyed Laurie Ellis's Vultan (oz1847) and Javelan (oz1981) deltas, available in Aeromodeller Plans Service. Anyone who has made a power model should not have any difficulty with the construction and will be rewarded by a model which will give hours of flying pleasure. The machine may be flown over ground but it will not take off from ground, the strengthened hull being particularly robust, it is not in the least fussy where it lands! Its water stability is excellent but, because of its low free-board, it should be flown from calm water. Its stability in the air is perfect - it has excellent stall recovery but it is imperative that the CG is not aft of the position shown and the tailplane MUST be at 2-1/2° incidence.

Sea King has been flown as a free flight sport model only. The hull is spacious enough for radio gear and the area of the wing is such that the additional weight can be carried with ease. The wing tip floats are not entirely necessary as Sea King has not been in the habit of digging a wing in except on the odd occasion on landing. The aerodynamic qualities of the 'droop-shoot' section are also open to debate but we use it on this type of wing because of the tremendous strength given to the wing.

Delta Trimming Technique. Now a word about the trim. Ensure that the model balances where indicated. The original weighs 26 ounces, with 2-1/2 ounces lead ballast in the nose. Screw the elevons to about 10° UP with the rudder trim tab neutral. Hold the model overhead, run into whatever wind there is and push into a glide in a slightly ncse down attitude. If the model glides too steeply, the elevons should be raised slightly, if it dives, they should be lowered. Proceed with caution at this stage and remember that this is a big model with a fairly fast glide.

Continue adjusting until you get a long flat glide in a straight line. In a delta remember that the model will turn toward the higher elevon. When you have adjusted for a long straight flat glide, raise the LEFT elevon just a shade and lower the RIGHT elevon the same amount. About one-third turn on the vernier screw is enough. Glide the model to see if it shows a tendency to turn to the left. As soon as a left turn is indicated, set the rudder trim tab -1/8 in to the RIGHT and glide again. the model will now glide straight or show slight turn to the right. It is now ready for powered flights.

Perhaps an explanation of this trim might not be amiss. Having built numerous deltas we have found that a delta can be dangerous under power in a RIGHT turn and equally dangerous in a LEFT glide. So, initially, we want to avoid these. After you get used to your delta boat you will know what liberties you can take with it. Thus we have adjusted the model so that torque, assisted by elevons, will turn the model to the left but the trim tab is trying to turn the model to the right, Under the higher speed of powered flight the torque and elevons win out and the model goes into a left turn with the trim tab holding the nose up thus preventing a spiral dive to the left. When the engine stops and the model slows down, the trim tab takes over to turn the model to the right in a turn but now the higher left eleven prevents the model from dropping into a right spiral dive. That is just a brief outline of what happens and it will give you something to work on for the first flight.

The take off run is dependent on conditions. On flat calm water it will need almost full power from a 1.5 cc and a run of about 100 feet. With a very slight breeze and small ripples it will unstick in about 40 feet.

For those who build this model we will predict hours of fun and also quite a stir of interest wherever you appear with it. 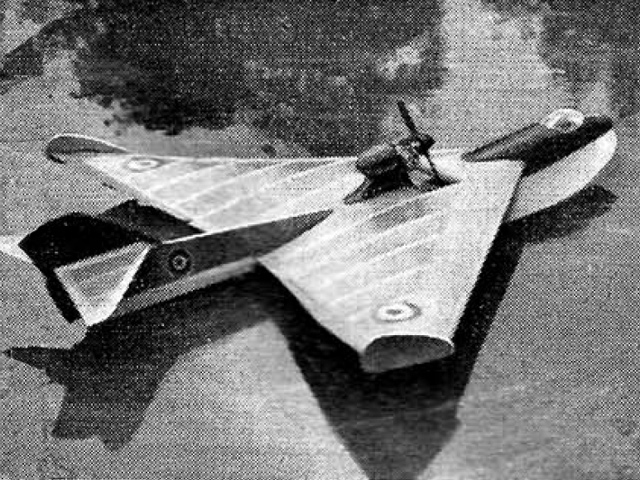