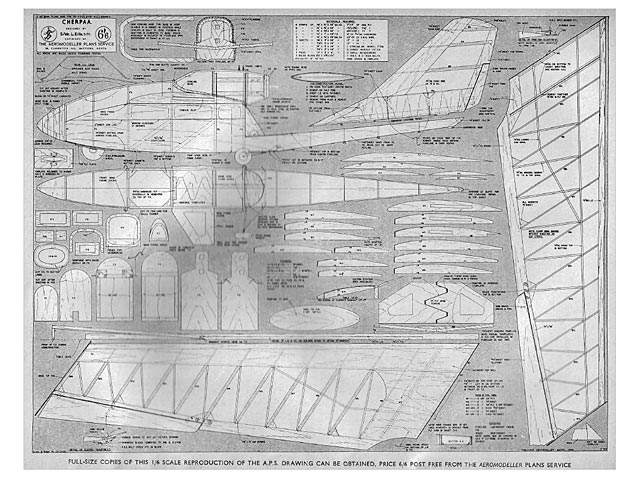 Quote: "Build yourself this unorthodox all-rounder that will take any motor from the Mills .75 to a hot stuff Webra 2.5 cc. CHERPAA, by S/Ldr Laurie Ellis, AFC

No CLAIM IS MADE for originality in design in 'Cherpaa'. The shape has been used before. A smaller version was built in Egypt in 1950 and its flying ability prompted thoughts for an improved version. With the 1955 British Nationals coming up it was felt that something a bit different might be tried for the PAA load event - however it was realised that its 654 square inches of area and 32.5 oz. unloaded weight would not put it in the winning class - still not everyone can win but a lot of us get a kick out of trying.

Cherpaa"gets its name from its resemblance to the Short Sherpa. It has been flown with Mills 0.75, Mills 1.3, Oliver Tiger Cub and Webra Mach 1. With the Mills 0.75 its performance is rather slow and underpowered but it does fly, however. On the other extreme, with the Webra Mach 1 it is in the 'hot' class and one will do well to go easy on the trim. The ideal for general all round fun is with a good Mills 1.3 using a pusher 8 x 4 prop, or one can use a standard 8 x 4 put on backwards and rotating in the opposite to normal direction.

The model is easy to build and the plans are almost self-explanatory. Anyone who has built a power model before should have no difficulty. Construction time is around 45 to 50 hours.

Trimming. Trim in fairly calm air for the first time. By means of vernier adjustment screws move elevons up approximatelyi in. Make sure that CG is as shown on plan. Hold model overhead and hand launch into long grass in a slightly nose down attitude. The model needs a reasonable push but don't overdo it. If the model shows a tendency to stall, lower the elevons a bit or if glide is too steep raise elevons. Remember that the model will turn toward the higher elevon. Keep adjusting until a long flat glide is obtained.

Using a pusher prop, rotation anti-clockwise, the model will turn to the right under power. Assuming that this type of prop is being used, first power flights should be tried on low power and slight left rudder. This will give a climbing right hand power flight and left hand glide. Be very careful with rudder adjustment as the model answers it quickly.

If an ordinary prop is used back to front and rotated clockwise, as can be done on the Mills, then the reverse trim to the above will be required. One can go on indefinitely on various trim settings so the best thing to do is use the above settings as a guide and go on from there. The model, with no load and high power, does not like straight ahead flight - it must be flown in a turn to avoid stalling flight. A load (16 oz PAA) cures this however.

With Oliver Tiger Cub 1.5 cc power the model will carry a 16 oz load with no difficulty at all. If anyone is contemplating the installation of R/C gear they can rest assured that it will carry the weight with ease. "

Note this is not a full size plan, if anyone has a clearer scan of this one, that would be great. 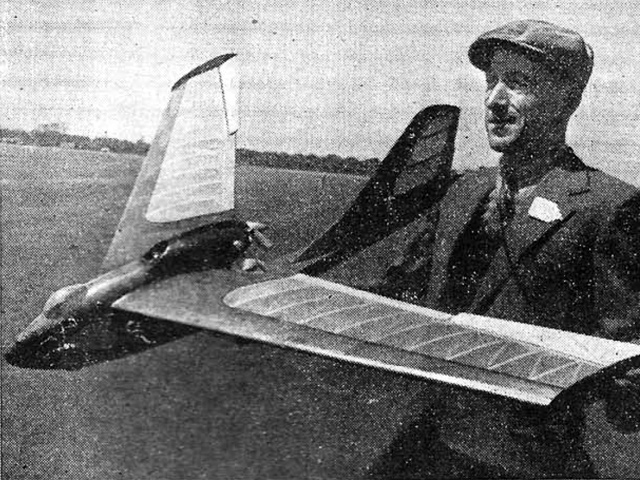 Added lovely pic of the completed model, thanks to Bob Pickernell [more pics 003].
Mary - 17/07/2018
I can't get this plan to scale up from the 1/6 shown on the original. Now, there is a very nice photo of a built model looking ready to fly accompanying the plan page, so somebody managed to build this model from a plan. Would the person who built this model please let me know how he/she did it & from which plan. I really want to build this model & I would prefer not to have to draw it up from scratch. Thanks in advance.
Kind Regards,
Ian Milne - 15/12/2019
Hi Ian, measuring on top of the PDF (Adobe Reader has a tool for that) I got a total span of two wing panels plus wing tongue very close to 10", so your 1/6 seems fine. In order to print full size you'd need to use 600% (divide full size 60" by dwg 10", you get 600%). Did you try this 600% already?
The plan will look rather messy, I suppose the usual - and rather heroic - plan cleaners were having a day off :-)
Miguel - 17/12/2019
Add a comment