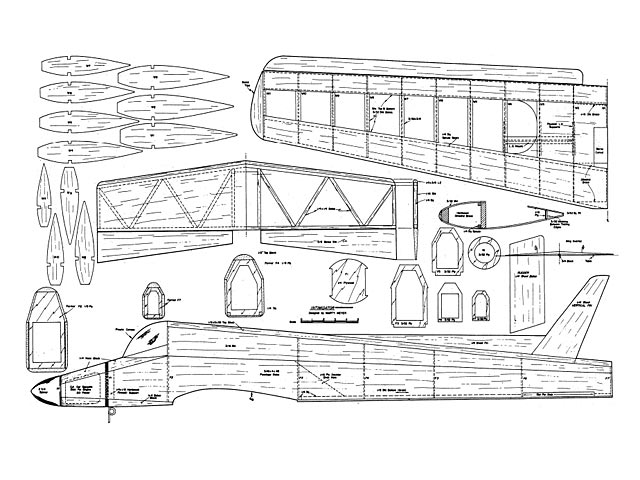 Quote: "A few nerve-wracking lessons are a part of every designer's life and the R/C Intimidator handed Marty some to remember. it's a well-tested, capable stunting machine. Intimidator, by Marty Meyer.

When I first started working on this design back in 1969, I had but one thought in mind. I wanted it to look sleek, yet built from a minimum number of parts. I wanted to get away from that usual boxy square look that you find in so many of today's multi airplanes. I was striving for a durable, light and fully acrobatic airplane that would perform the entire AMA pattern. I wasn't looking for a fancy job covered with dozens of fillets, fairings, and cowlings which add absolutely no functional purpose to the aircraft, except exotic looks and excessive weight.

It took me about four weeks to draw up the plans and complete the entire plane. I first tested the design at The Rockland County R/C club's field. There were at least six modelers present at the time and I must admit I had a little jelly in my knees at that moment, for there was no backing down. The weather was perfect and the engine was howling. I had no legitimate excuse for aborting the test, so down the runway she went. The takeoff was almost perfect and to my surprise, it required very little trim. It flew right off the board you might say. Roll rate was just perfect and they looked as if they were machined to order.

The design flew much faster than I had anticipated with the thick wing, but the flight did point out one fault which I corrected easily. During the construction I thought it would be cleaner if I could conceal all the pushrod linkages within the fuselage itself. The elevator gave me no problem whatsoever, but I goofed on the rudder. I had connected a piece of .075 dia music wire to the articulating hinge area, which was connected to the rudder. The wire proceeded to extend down through the top of the fuselage and onto this extended wire I had silver soldered a control horn.

The entire system looked beautiful except for one thing, it didn't work. With a rudder as large as this, I should have known better. I had no leverage at all with this .075 dia wire exactly on the hinge point. As the plane was flying at the higher speeds, it picked up such a tremendous rudder flutter that I had visions of the entire tail section being torn off.

After my second flight, I was convinced that I had enough for the day and went home to make the necessary changes. I mounted a rudder control horn directly to the rudder in the conventional manner, but I mounted it about 3/4 in to the rear of the hinge point. I mounted a link (outside the fuselage) to this horn and this gave me all the leverage I needed. I flew the ship again, and the problem I had encountered was now solved.

This ship performs exceptionally well in all kinds of wind conditions, without the slightest tendancy of empennage yawing. The plane will stay in the position you place it in. You must fly it all the way, but you have the sensation that you are really the pilot in the plane itself.

After building three of these ships I was being hounded by dozens of modelers who saw it in flight and wanted a set of plans. There are over thirty six in the making at the present time, fifteen are in the Blue Angels Club alone and several have hundreds of flights on them. They all vary in weight of course, but seem to fly the same. Some weigh in at six pounds and other builders go up to 7-1/2 pounds. It is all up to the finish the builder chooses.

I don't claim this to be the ultimate model of all time and I doubt any modeler has the right to say that. As time marches on, so does the R/C equipment, the pattern becomes tougher, and the design of the plane must also advance. No one can say what the model plane will look like two years from now. It may even have the tendency to look wingless like some of our fighter jets of today. It wasn't too many years ago that a high wing cabin type airplane won the Nationals and every modeler yearned for that plane. Today, we would consider that design just a heap of lumber, and we wouldn't even consider it for a trainer.

This airplane has the ability to fly at quite a high rate of speed, yet when you throttle her down, it can be flown to almost a standstill. I am often asked just how slow it can fly before it stalls out? I honestly can't say, because of all the Intimidators flying in this area, no one has ever seen one stall. I would like to mention at this time that I didn't copy this airfoil from any known one when I drew up the plans. I just picked up a french curve and drew out what I wanted. I'm sure that if I did any research, I would probably find a duplicate somewhere along the line..." 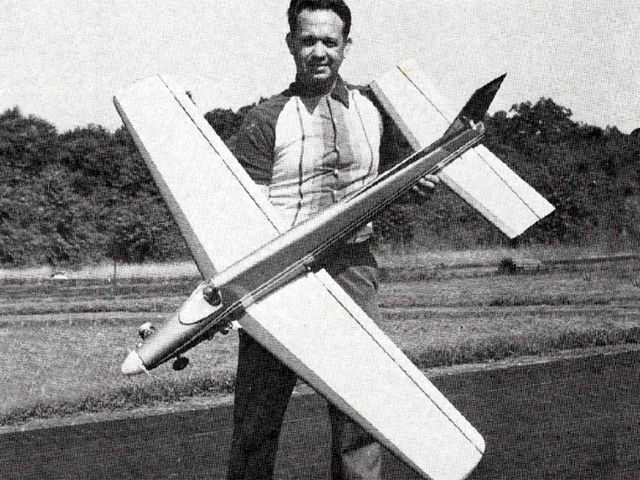