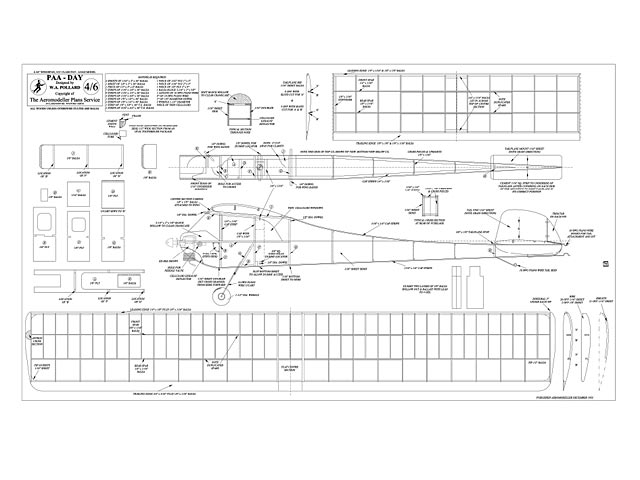 Quote: "Winner of the PAA load design contest ...AT FIRST glance, this model appears to be quite a conventional little cabin machine, of pleasing lines and general neat appearance. However, since every member of the panel of judges quite separately awarded this design top marks out of the considerable number of first-class designs submitted, there is obviously more to it than meets the eye. Examination of the drawing indicates that a tremendous amount of thought has gone into the model. The designer's first aim was good appearance consistent with an aerodynamic layout using a long moment arm and a fairly powerful tail. To employ the Bee engine, this meant a short nose, and numerous small sketches suggested that an inverted motor could be placed well back and hidden, bringing the CG to the desired well-aft position and still allowing a good slope on the windshield. Inversion also meant that the thrust line could be reasonably high and the undercarriage shortened, with a consequent reduction in weight and drag. The dummy is placed on the CG to avoid alteration of trim. Shallow curves soften the lines of the fuse- lage, and the straight dihedral and twin fins are designed to contribute to the aesthetic appeal of the machine. Constant chord was used for reasons of time and simplicity. A total area of roughly 350 sq in was felt to be desirable, based on previous performance factors obtained with models of similar weight and power. This is broken into a 260 sq in wing and 90 sq in tail, which are given fairly high incidence angles on the assumption that models glide at a high angle of attack..." 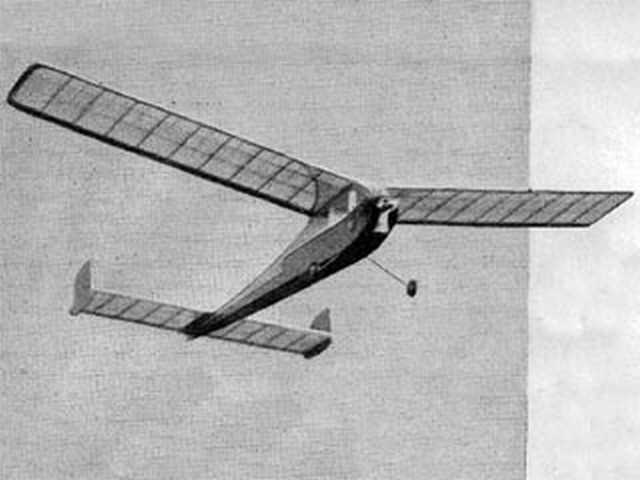