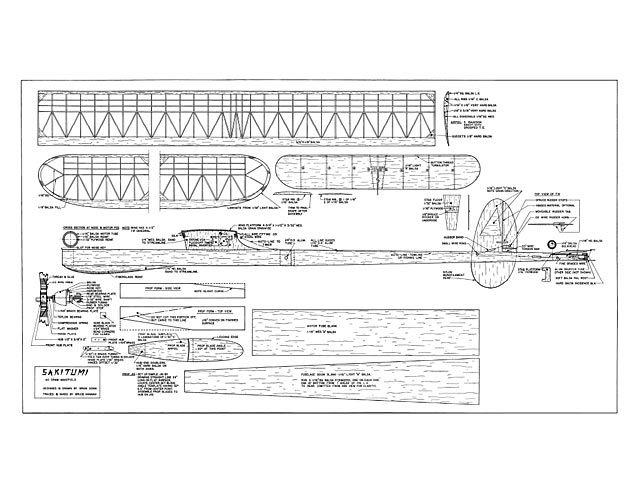 WAKEFIELDS HAVE CHANGED radically during the last 25 years. Too many builders and fliers were too good, so the rules were changed to make things tougher. The old birds, circa 1940, had unlimited rubber, and the airframe could be made as the builder pleased. However, the bulky big cross-section fuselage had to be dragged through the air, and models were required to ROG.

In the early 1950's, rules were changed to limit the rubber allowance to 80 grams (about 2.75 oz). The airframe now had to weigh about 5-1/2 oz in order to bring the total minimum weight up to the required 230 grams. Wakefielders viewed this as the end of their favorite event, but they rose to the challenge and soon were stringing out maxes like bubbles from Lawrence Welk's bubble machine. Clearly, this could not be allowed to continue, so the rubber allowance was chopped to 50 grams, or about 1.75 oz. At this point, the ROG rule was scratched, as was the minimum cross section rule.

In the meantime, the Nordics were developing, as the gumbanders borrowed a few ideas about thin airfoils, long fuselages and small stabilizers,, and adapted them to their latest designs. With the elimination of the ROG, fliers no longer had to be concerned about the prop clearing the ground on takeoff. Prop diameters jumped from 16-18 in, which had been almost universal, to 22, 24 in and more. The bigger diameters were felt to be more efficient as well as able to provide a certain helicoptering effect in the near-vertical phases of the initial climb. (A bad stall just after takeoff had wiped out many a crate in bygone years).

The 50-gram models evolved slowly, as old ideas were found to be no longer usable. All possible prop-power combinations were tried. Some models sported high pylons. Other were shoulder-winged. Several low-wing designs were tried with great success. Eventually strings of five maxes became fairly common, aided by the thermal-sniffing techniques developed by the glider set.

The crowning indignity came in January 1966 - 40 grams of rubber! That's what the new rule book said. Total weight to remain the same. Most of us simply reworked our 50-gram models to accept the smaller motors and to bring weight back up, yet we still managed to get a goodly number of max flights.

But one big problem had to be faced. The uneven power output of rubber motors was increasingly difficult to manage as the rubber allowance was cut and cut again. The discrepancy between the initial burst and the cruise became more marked, as short, tightly-stretched motors now were wound almost to the breaking point. There was no power to waste on acrobatics. Nor could fliers afford to use much downthrust to control the burst, since this could seriously impair the climb in the cruising stages.

Not that this problem has been completely ignored. Several of the leading modelers, including Joe Bilgri and George Reich, have been recommending the flaring type of prop for some time. It helps to make for a smooth, consistent climb with a minimum of gadgetry, and has been widely used in recent years.

Another possibility is some sort of device to change the trim of the model just as the power burst is tapering off into the cruising climb. The first model of this type which I saw (and, as far as I know, the first model of its type to be successfully flown) was designed by Clarence Mather. Dubbed the Flapjack, it featured hinged trailing edges on the wings. By means of a timer-operated cam in the pylon, the trailing edges could be raised about 3/32" for the launch and lowered 8 or 10 sec. later for the remainder of the flight. Under ideal conditions, the model shot practically vertical on the burst and fast and steep until the prop folded. The Flapjack made stunning flights but, for reasons never fully figured out, it was a trifle sensitive and would occasionally put in a disappointing flight just when an extra max was needed.

Although I decided against building the Flapjack, it continued to intrigue me. There was no arguing with the principles Clarence incorporated in this Wakefield, but I felt it would be safer to build a conventional fixed wing and provide for the in-flight change in decalage by means of an auto-stabilizer. Many FAI Power jobs flew safely with less than one degree of decalage, so I had no qualms about reducing it from the normal three degrees to about one for the power burst. In order to get the best possible climb during the cruise, I also decided to use no downthrust.

While roughing out the design, I learned that others who were experimenting with the same idea obtained the best results by also incorporating an auto-rudder to trim for a straightaway initial climb rather than a steep, corkscrew getaway. To keep the unknown factors to a minimum, I patterned this new Wakefield after one of my best earlier designs, Droopy. The only modifications made were a slightly longer fuselage with smaller stab, squeezing a few more square inches into the wing, plus the moveable stab and rudder.

The new model, Sakitumi, performed beautifully from the outset. The climb was all I had hoped for, and the glide showed the same ability as that of the ship's predecessor to handle rough gusty air, and yet be able to ride out a weak thermal in less turbulent conditions.

Construction With the exception of the auto-stab and rudder, construction is simple and straightforward, therefore, a minimum of detailed instructions are necessary.

The wing airfoil used on this model and the earlier Droopy is the old Isaacson 53507 with a flapped trailing edge. This particular airfoil is thicker than most near the trailing edge, thus avoiding the typical weak area where the ribs join the trailing edge. Previous models which used this section seemed to bear out the theory that not much undercamber, if any, is really needed, provided there are 10 to 15 degrees of flap on the trailing edge.

When building the wing tips, do not shape the trailing edge pieces until after the ribs, spars, diagonals and curved tip pieces are all in place. When the excess trailing edge material is trimmed away, a little washout is automatically built into the tips. To make the laminated tips, soak the strips in warm water for a few minutes, blot them, and then laminate with a water-soluble glue such as Willhold or Titebond..."

Hi Mary/Steve - Here is Brian Donn's Sakitumi from American Aircraft Modeler magazine issue 09-71. This plan is scaled to the '3 inch from pylon leading edge to balance point' as referenced in the text. 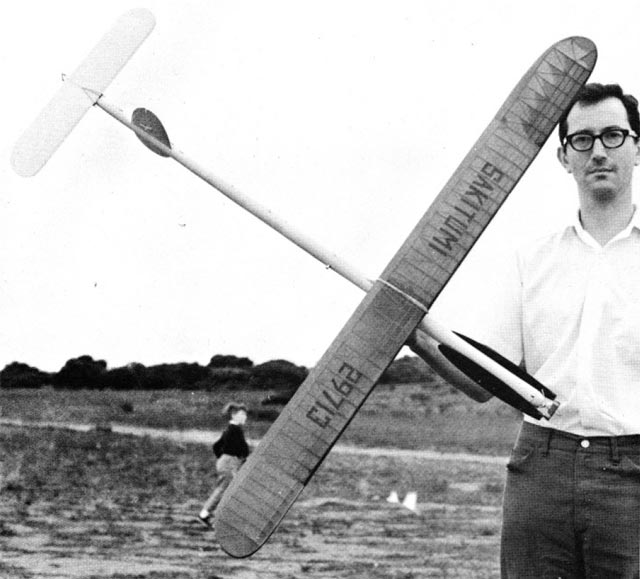