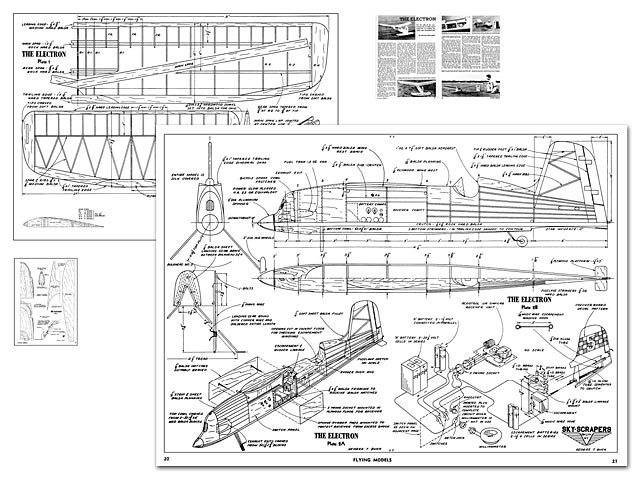 Electron. Single channel RC model. Parasol design, from Flying Models, December 1950. Cleaned up and scaled to full-size, thanks to theshadow.

Quote: "Join the ranks of the ever-growing army of radio-control model fans by building this simple super-streamlined ship! Electron, by Norman Rosenstock.

In designing the Electron, our basic idea was to develop a radio control model that would be of rugged construction, give good performance and be realistic in appearance. The ship was to be built around the radio-control equipment, keeping the location of the components ideal as to weight (batteries forward, receiver behind), with a minimum of long wires.

Another important factor was that the innards must be easily accessible. In a converted free-flight model, you must either remove the wing each time the receiver needs any adjustment or cut a hole in the side of the body for a door, weakening the framework.

Our present Electron is the fifth model of this design. The original was a high-wing cabin job. This was discarded because of the structural weakness of cabins - they can't be braced as well as the rest of the airplane.

Wing. Before you start actual construction, scale the plans up four times the size shown. Choose two pieces of 1/4 by 1 in for the main spar. Cut and splice the main spar to give the desired dihedral of 5 in. Cut two gussets from 1/4 in hard balsa sheet, cement to spar splice, and put aside to dry.

Then cut the trailing edges and splice tip taper as shown on plans (The usual procedure is to make one left and one right).

Now cut out the ribs from medium-hard 1/8 wood, being careful to keep the spar notches perpendicular to the bottom camber to prevent warps. Tack the spar and trailing edge to the plans. Then, starting at the tip end of the wing, cement the ribs in place up to the gusset plate. Allow time for the cement to set so that the structure can be removed from the plans (Don't worry about the leading edge and spar, we'll come back to that later.)

Pin the other side of the main spar and trailing edge to the plan and follow the same procedure to construct the other half of the wing..."

Additional version of plan from FM Dec 1950. This is a raw scan of the magazine pages, not a full size plan. 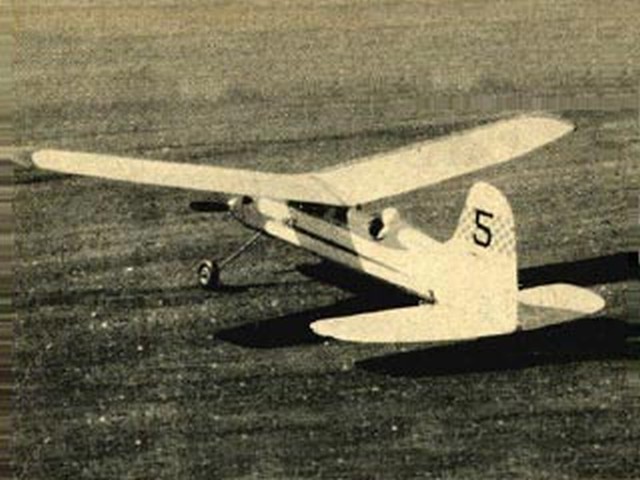