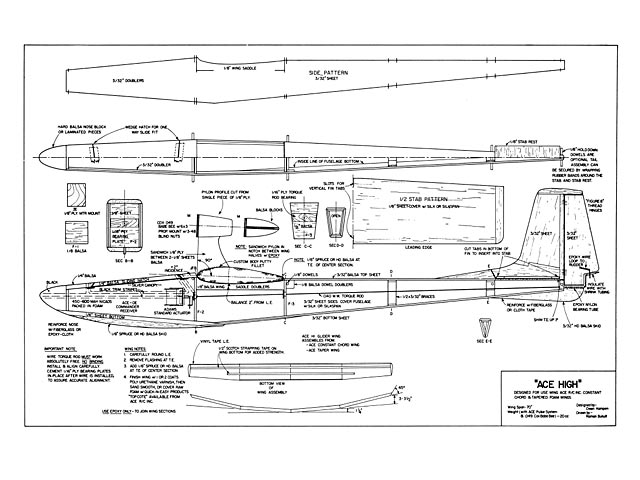 Quote: "INTEREST IN RC gliders has soared to new heights, with each season bringing new converts to this relaxing yet challenging form of flight. Plans for these slim-winged beauties appear with increasing regularity in model publications, and an ever-growing number of kits are being offered. Yet far too many would-be soarers remain grounded for reasons such as these:

(1) Long wings are built with lots of ribs and other pieces, thus requiring considerable care and skill in assembly and covering to prevent bends and twists.
(2) Many parts of the country are unsuitable for slope soaring, and towing devices are expensive and complicated for an individual who flies alone.
(3) The need for extra RC gear can be expensive for a fun plane or for a beginner, whose pocket jingle is well below a hundred dollars.

Enter Ace High, the super solution sailplane. Wing construction is simplified through use of both straight and tapered sections of ACE R/C molded foam wings. No ribs, no spars, no warps! The launch problem is handled by a stock Cox Baby Bee engine, which puts the ship hundreds of feet high and allows plenty of minutes for thermal seeking. Purists may object to powered sailplane, but they do provide built-in slope for those who are far removed from coastal and mountain areas.

Finally, this long, lean craft can be remote-controlled with some of the most reliable and inexpensive RC equipment available - namely, the ACE Commander RO Pulse transmitter and receiver, coupled with a standard single Adams actuator. The whole package is available for about $60. Generally overlooked in today's mad rush for digital gear, simple pulse proportional rudder updated to 1971 standards of integrated design reliability is hard to beat. With no motors to wear out or gears to break and operating with but one moving part, this system is the essence of simplicity. And it works and works and works.

The fuselage is a fast-building, modified slab-sided box which holds everything together with minimum drag. As a result, Ace High can be airborne with a minimum investment of time, effort and money. It then stays airborne to a degree which exceeds all expectations. Still air flights of six to ten minutes are common. A touch of lift and away it goes, so keep those batteries charged and ready for long, high flights.

Flight testing assistance was provided by Paul Yee and Tom Runge, who were separated by 500 miles and flew individually-built versions of the Ace High. Their test results were remarkably similar and confirmed the soundness of the basic concept. Changes suggested by each were incorporated in the final plans shown here. My thanks to both of them. Tom's account of the first flights follows:

George Schwarzer and I flew the first proto design of the Ace High. Knowing that changes had to be made to improve performance, we started with the original numbers and had a fast, but fairly flat test glide. Under power, the plane gained very little altitude, and the glide was a long way from floating. In subsequent flights, we consistently increased wing incidence and moved the CG back by 1/4 in increments.

By the fifth flight, we had moved the CG back to about 35 percent and the wing incidence to about +4 degrees. Under power, the Ace High from launch to engine cutoff maintained about a 30-degree climb with absolutely no lack of control or tendency to drop off or stall -almost as though it were being towed up or high-started. When the engine quit (with good transition), the ship went into a nice flat, slow, almost nose-up
glide, with fantastically quick yaw response to the stick and absolutely no stall tendency. We have yet to see the plane stall. It seems to just fly slower and slower while maintaining its altitude.

We experimented with a built-up empennage to decrease the overall weight. Performance was improved in the glide but wind penetration was impaired because of less weight. The ship flew beautifully in fairly calm weather. To date, when flying we haven't had any thermal activity to see how the Ace High would ride on convective activity, but with the good yaw-type moves we get, the ship should have no problem staying in a thermal and riding it to its limits.

Our next experiment is trying a T-tail configuration. The Ace High is so inherently stable and maneuverable that we're not afraid to try drastic alterations to change flight or looks. Flying was done with an ACE Pulse Commander. Elevator control was not missed-the plane just doesn't need it.

Paul Yee's comments on trimming and first flight testing will lead to success if these procedures are followed carefully:

Before test flying, align the surfaces as accurately as possible. The model must balance as shown on the plans, and the wing and stab must be straight. Check the angular difference between the wing and stab by first setting the model on a flat table and blocking up the tail until the leading and trailing edge of the stab are the same distance from the table. Now measure the distances from the wing trailing edge to the table and from the wing leading edge to the table. Make these measurements right at the fuselage side and use the faint molding lines at the leading and trailing edges of the foam wing as reference points. The leading edge should be set half an inch higher than the trailing edge.

When ready for some test glides, block the rudder in neutral and pick a nice grassy area. Run with the model and then gently push it forward with its nose pointed slightly downwards. The model should glide at a shallow angle and then slide along the grass when it lands. However, it should not tend to skim along the top of the grass. If it dives, remove nose weight or shim up the trailing edge of the stab 1/32 in at a time. However, be sure the zoom is not caused by launching..." 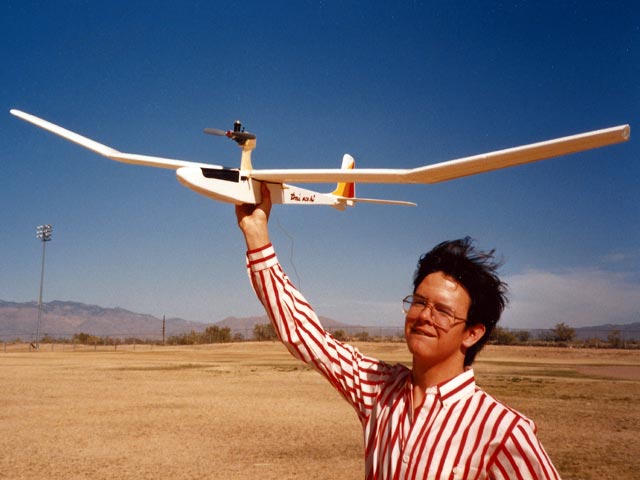 Do you have any info for a built up wing. Ribs specifically. Or possibly a wing kit?
JohnL - 27/07/2017
This design was built around using the pre-formed Ace Foam Wing. You could build a replacement from balsa using the Ace Foam Wing (oz8557) plan thanks to AndyKunz, if you wanted to go that route.
SteveWMD - 28/07/2017
Use the wing plan for the Dick's Dream (oz5747), and build two constant chord center sections using the root rib. Easy. The Ace airfoil is usually considered to be a NACA 2414 but a 2412 is probably a better thickness to go with (12% vs 14%) Especially for a glider.
dfritzke - 28/07/2017
Steve and Mary, I taught myself to fly R/C with an Ace High Glider equipped with a Golden Bee .049 and 2 channel Sanwa radio. I survived and went on to enjoy years of soaring followed by decades of electric Parkflyers. The Ace High did not survive. Here at Santa Rita High School athletic field in Tucson Arizona in 1986 is Donald, my teenage friend, with my second Ace High Glider [main pic]. I was teaching him to fly. Notice the light poles in the background? Donald survived and went on to be a skilled R/C pilot and model builder and designer. Great memories.
Tom Binkley - 15/02/2021
Add a comment