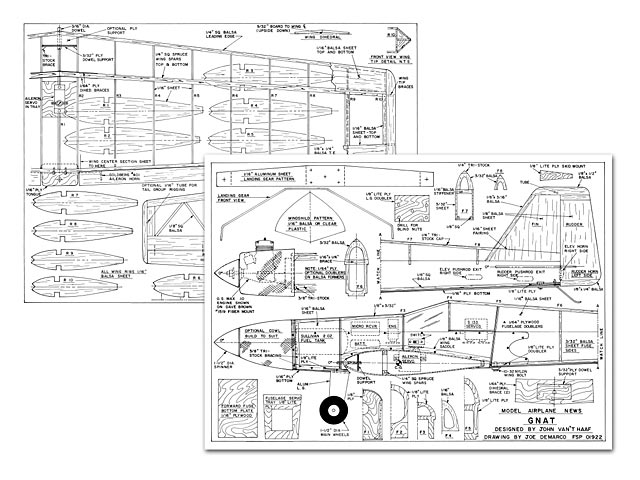 Quote: "WHEN I originally decided to build a small sport/pattern-type aircraft, it was for several reasons. At the time, fuel was virtually unavailable in our area; I didn't have much balsa wood on hand; and I was fed up with having to disassemble my larger airplanes just to transport them in my Volkswagon beetle. wanted a plane that would be quick and easy to build, wouldn't require an abundance of material, wouldn't cost much to operate and would be a real joy to fly. The Gnat certainly fills the bill.

The Gnat uses conventional balsa and plywood construction methods, and it isn't hard to build. The fully symmetrical wing has building tabs so it can be built flat on the workbench. An OS Max .10 with a 7x4 Master Airscrew was used in the prototype - an excellent choice for the Gnat. A 7x4.5 Top Flight prop was also used with good results. I've tried a .15 engine, but it's too heavy and has too much power for the model. (Not recommended!)

The Gnat is inexpensive to build and operate and easy to transport to the flying field. It has a predictable stall (straight ahead) and, with the control deflections shown on the plans, it's a joy to fly. A micro-size radio is required.

Construction: The Gnat's construction is fairly straightforward, and all incidences are set at 0 degrees. First, lay out the wood and cut out all the pieces. To check that the ribs are symmetrical, reverse the rib pattern over each rib after laying it out on the 1/16 sheet. Since the wing section is fully symmetrical, this task is quite easy. It also helps if you draw the center line on both the pattern and the rib stock. The inside of both R-2 ribs should be laminated with 1/64 ply.

Tail Group: Cut the fin and rudder out of sheet stock according to the plan. I reinforced both sides of the rudder and the elevator with 1/64 ply (feathered at the edges) where the horn would be mounted.. I also added ply to the opposite side to reinforce the joint between the elevator halves and the joiner. Control surfaces are tapered as a matter of course. On an aircraft of this size, it may not be aerodynamically significant, but it's more aesthetically pleasing.

Wing: If you don't have a jig, use the building tabs, and build the wing directly on top of the plan on your building board. This should automatically give you 1-1/2 degrees of washout. To help set the angle of dihedral when the two wing panels are joined, set R-1 at 1-1/2 degrees. (The gauge provided on the plan will help.) Once you've aligned the ribs over the plan, insert the upper and lower 1/4 inch square spruce spars. Check the alignment of the leading edge to the ribs, adjust as required and glue into place.

To ensure a proper fit for the 3/16 x 1/4 trailing-edge stock, sand the trailing edges of the ribs and glue them into place. Add the fore and aft sheeting to the top of the wing, and add the cap strips. (To help prevent the wing from warping or twisting, it's a good idea to complete the top half of each wing section before removing the wing panel from the board.) Remove the wing from the board, and apply trailing-edge sheeting.

After the dihedral braces and the locating dowel have been glued in, carefully cut off the tabs forward of the spar, sand the ribs gently, and affix the sheeting as you did for the top side. Remove the rear tabs and sand as required. Complete both panels in the same manner, and join them to produce the dihedral indicated on the plan. Sheet the wing center section between both R-2s with 1/16 balsa on both the top and the bottom..."

Quote: "Hi Steve! Awesome site! Thank you for taking the time to run it ...a new plan you do not have, it is a pullout from 1992 issue of Model Airplane News, the Gnat, I had it scanned in 2 PDFs. Hope this helps! Thanks!" 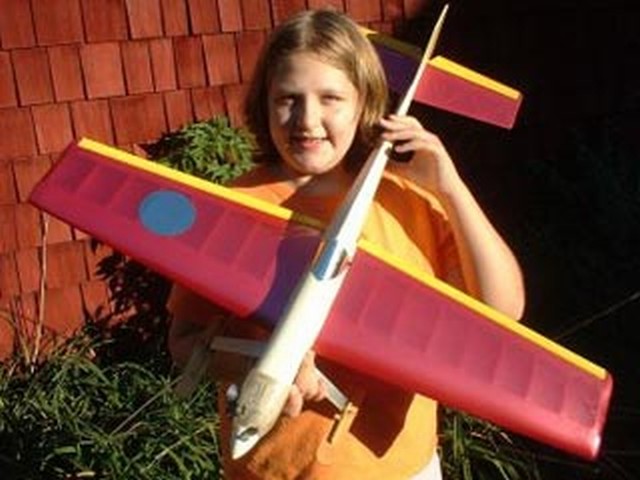