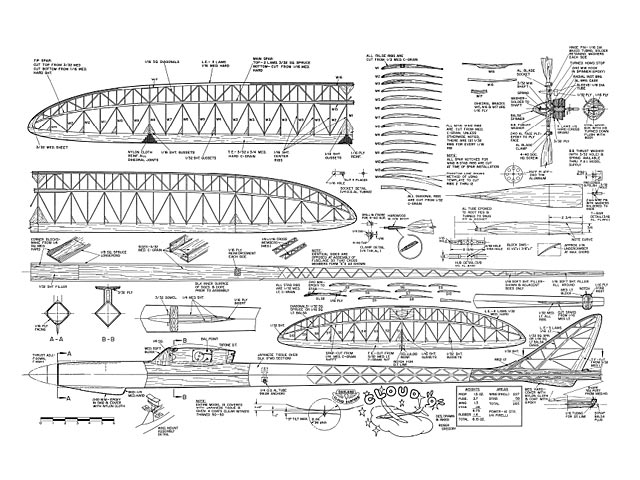 THE FAI Wakefield event is, I believe, the most challenging and enjoyable event in free flight competition. The ultimate goal in this international competition is the Wake-field Cup, the oldest and the most coveted award given for a competitive model airplane event. The FAI free flight events have been the subject of more progressive think-ing and applied aerodynamic theory by top model designers than any other field of free flight model aviation. Wakefield is no ex-ception!

For those who plan to embark on the long, bumpy road to success in FAI Wakefield competition, it is never too soon to start laying the groundwork. To meet the keen competition, it is best to start the next qualifying season with at least two well-tested models, plenty of good rubber, and lots of determination. Whether the FAI program is your bag, or if you plan to fly just in local competition, here is a design that is time-tested, having qualified for the US finals twice at Bong Field, Wis, in 1966, and for the Albuquerque finals in 1970.

The development of Cloud 9 dates back to late 1964, after the West Coast semifinals at Tulare, Calif. I was flying a straightforward, constant-chord model using 14 strands of 1/4 in Pirelli (see p. 89, Zaic's 1964-65 Yearbook). After analyzing the reasons for not placing higher at Tulare, the conclusion was that a model with increased power output was needed, as well as one that would be more sensitive to the weak morning thermals. With these goals in mind. plans were drawn for Cloud 9.

During this time, my close association with Howard Timlin, noted for his Saturn and Solar power designs, served to inspire the lines of the new model. His ships were beautiful and meticulously constructed.

Main considerations for the evolving design were a small stab, around 25%, and a short nose-moment arm, with the CG placed around 60% of chord. These changes from the previous models resulted in buoyant, thermal-sensitive glide characteristics. The aspect ratio was increased, and thinner airfoils with lower profile thickness were employed. A 16-strand motor was used, coupled with a 22 in dia x 26 in pitch prop. This combination seemed to take the best advantage of the reduced drag. All of these factors resulted in a model with good penetrating qualities and excellent early morning still-air time, averaging around 3:30.

Two variations of the basic Cloud 9 lay-out were built during the time the 50-gram rule was in effect. The first model employed the Benedek B-7406 f. The use of this airfoil resulted in superior still-air times, but the second variation using the B-6405 b section seemed to have better penetrating qualities in all types of air. When the new 40-gram rule came into effect in 1966, a new variation was built to its requirements. This model had the same basic layout, but with reduced areas and thinner airfoils, The idea was to minimize drag as much as possible and shoot for altitude. Although performance was good, it couldn't compare with the climb and glide qualities of the original Cloud 9 layout, which is presented here.

The only major modifications made to convert the orginal for the new rule were in the location of the rear motor anchor and in the propeller design. It was decided that a further reduction in diameter and increase in pitch were needed, along with a reduction in blade area at the tips. Still, the goal was altitude with a high-power, short-burst climb..." 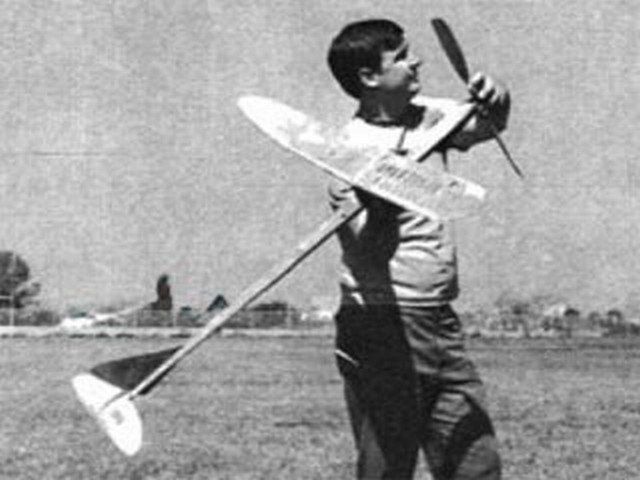