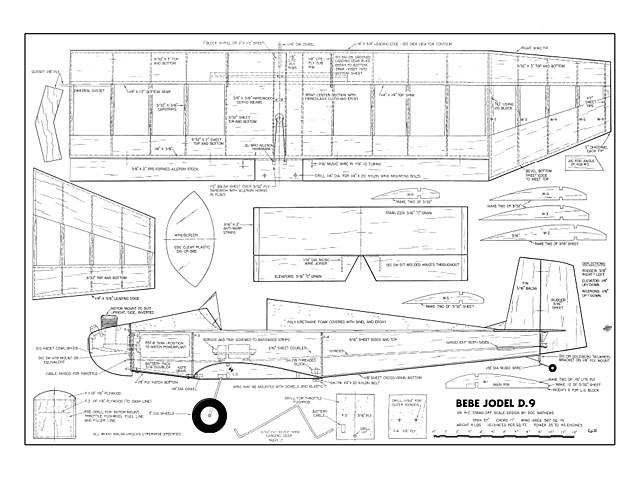 Quote: "A Stand-Off R/C Scale of an aircraft that even looks as if it were a model. The gentle flight characteristics of this fine homebuilt have made it popular with pilots. Doc Mathews.

Powered by converted VW engines abandoned by the retreating Germans at the end of World War II, the simple all wood Jodel D.9 Bebe was a boon to the post-war European sport flying movement. Approximately 700 Bebes have been built in France and elsewhere since 1948. The Bebe is truly a 'baby' in that its span, a mere 23 feet, its length 18 feet, and 2 polydihedral wing gives it the illusion of being an oversized model airplane. Construction is all spruce, with plywood and fabric covering. The undercarriage is rubber sprung, and the rudder is all moving with no fin.

The Bebe Jodel has ideal moments for scale model use, that is obvious, as is its complete lack of complex curves and ellipses. These appealing virtues have in-duced several scale model of the Bebe to be published and several kits to be marketed over the years (many of us fondly recall a Free-Flight Jodel marketed by Midwest for many years). Strangely, the Bebe has never been selected as the subject for an R/C trainer, at least not to my knowledge. Knowing that the subject possessed sufficient inherent stability to fly in the Free-Flight scale mode, I felt certain it would be an excellent aileron trainer if developed in a simple-to-construct form. My expectations have been amply rewarded with a model of delightful appearance and superior stability.

This project is directed primarily at the newcomer to our hobby, who has built and flown (successfully) several beginner type trainers such as the Sig Kadet (oz2950), and is now considering advancing to an aileron airplane that his current engine and hardware will fit. That the Jodel's construction techniques are strongly Sig Kadet-like is not an accident on my part, as I felt that the newcomer would be comfortable using a wing building method with which he was familiar, even though it is mounted on the fuselage bottom, and has been modified for the use of torsion-bar landing gear. The fuselage is strongly Formula 500 in construction style, as I admire the extreme simplicity and fail safe alignment of these designs.

The objectives of this project were:

1. Kadet like construction and flying characteristics.
2. A low wing aileron equipped model sized for .29 to .40 engines.
3. Scale appearance with an opportunity for each individual builder to create a distinctive looking model.
4. Easy maintenance of the systems with good accessibility and repairability.
5. Rugged and durable design to survive the inevitable bad landings and rough handling.

Although directed primarily at the beginner at the second level in flying skills, the model possesses enough eye appeal and flyability that it is also a delightful Sunday sport flyer.

General Notes: All references to glue in this article refer to Aliphatic resins such as Sigbond, this is the primary adhesive for the entire building project. Epoxy refers to the 2 parts to I part types such as Formula IL No 5-minute epoxy should be used. The abbreviation CA stands for cyano-acrylate, the generic name for the likes of Hot Stuff, Jet, Zap, etc. The cowl is a Sig catalog item and is available through your dealer or direct from Sig. All other hardware is easily obtainable, as every effort has been made to avoid the exotic or unusual.

The cloth used over the foam is 'Dynel', available from aircraft suppliers as it is used in the construction of the Rand and Varieze home built aircraft. To my considerable surprise, Hobbypoxy E-Z Does It cloth appears identical to the Dynel. The foam itself can be either beaded styrene (Styrofoam brand name) of polyurethane. I prefer urethane foam for its superior carving and sanding characteristics, but it is more difficult to purchase. However, if you can locate someone in the midst of constructing a forementioned homebuilt, his scraps and chunks will supply you with enough poly-urethane to construct this and several other models.

I would be remiss were I to fail to warn anyone considering cutting this product with a hot wire that the resultant fumes are extremely toxic. If the first cutting doesn't put you away, the second or third will, as the toxicity is cumulative; that is, your lungs and liver do not detoxify the stuff, they merely store it. This dangerous phenomena is also encountered when using epoxies, polyurethane and polyesters as paints in a closed space. This is a great hobby, but not worth dying over.

The Fuselage: Develop two identical sides by tracing the plans with carbon paper over the wood. Drill holes in the fuselage sides for the wing dowels (if the bolted-on wing option is not being used) after installing the doublers. Be certain you are making a left and a right side. Cut F-1 through F-4 from 1/8 ply, marking a mid-line vertically on each. Drill holes for fuel line, throttle pushrod, and Nyrods before assembly. Epoxy the triangular balsa braces for the firewall and F-4 to the sides.

Cut the stab and mark a centerline on both top and bottom surfaces. The fuselage top is cut to length, a centerline marked as well as the bulkhead locations. Position the fuselage top and stab directly at right angles to each other using the lines as a reference and epoxy the joint. Glue F-2, F-3, and F-4 onto the top positioning F-2 with a scrap sheet jig, for the proper downthrust angle. (See photo #1).

When this assembly has cured suffi-ciently, glue the fuselage sides to the bulkheads and top, drawing together at the rear over the centerline. Use clamps, clothespins and masking tape to hold everything in position while the glue sets. As long as the centerlines are followed and the fuselage top is flat, it is nearly impossible to construct a warped or crooked fuselage. Now that is simple!

Install the Nyrods through the slots previ-ously cut in the tail area, feeding through the holes in F-4. Epoxy outer Nyrods after roughening with sandpaper. Add ply hatch doublers and frame. Cover fuselage bottom with cross-grained 3/32 sheet. Allow glue to set, then remove fuselage from work surface..." 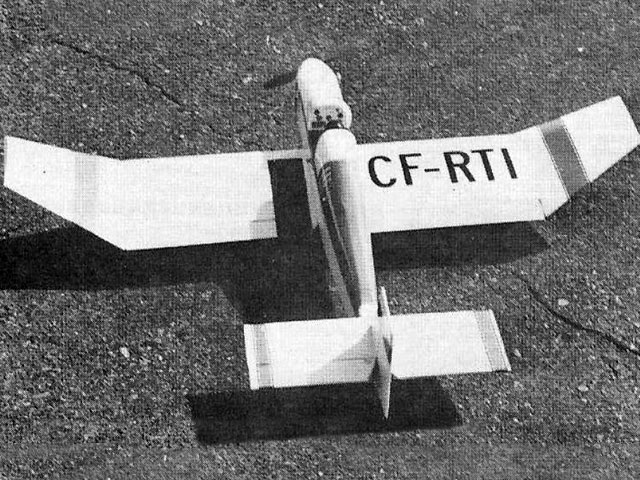