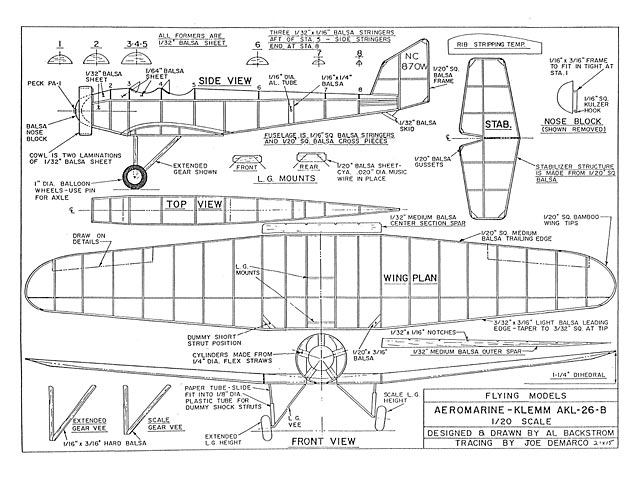 Quote: "During the late twenties considerable work was done on the development of low powered airplanes. These aircraft were marginal fliers, having to achieve their performance with engines that were low powered and sometimes heavy. Needless to say, they then had to lift a payload of pilot and maybe a passenger. We are fortunate because these same limitations of the full-size planes can lead to a design that is well suited for a rubber scale model.

One of the most popular airplane designs of this low-power period was the Klemm series. A German design, it was built in several countries under various names as well as in its native land. The version built in the United States was done by the Aeromarine Company of Keyport, NJ. Its version of the airplane eliminated the folding wing feature that was popular in Europe, and at first used a French Salmson radial of 40 horsepower but later used the common small five cylinder American radials rated at up to 85 horse-power. You can read Jumpter's US Civil Aircraft Vol 3 and 4 for further information and photos of the airplanes. Three views of these airplanes are rare so both versions are given in small size in this article.

The aircraft model presented here is the last type built with a five cylinder radial engine. The Townsend speed ring was not a standard feature but they are pictured in Jumpter's books. Except for the short nose the airplane has perfect proportions for a rubber scale model with a large wing relative to the fuselage and a long tail moment. The short nose would make the design desirable for a CO2 or electric, so both a scale landing gear for this type of power and an extended length for rubber power are shown on the drawing. My model was intended for indoor flying so I tried to keep the weight to a minimum. For outdoor flying a somewhat heavier structure may be desirable.

The model, as drawn, deviates from scale in that it has a thinner wing section and slightly more dihedral than the orignal, idon't forget the extended landing gear if rubber powered). Other dimensions are to scale.

Construction. This model features typical stick and tissue construction and so should pose no special problems, The fuselage is built from 1/16 inch square stock for the longerons with a sheet cutout over the wing. The cross pieces are 1/20 inch square..." 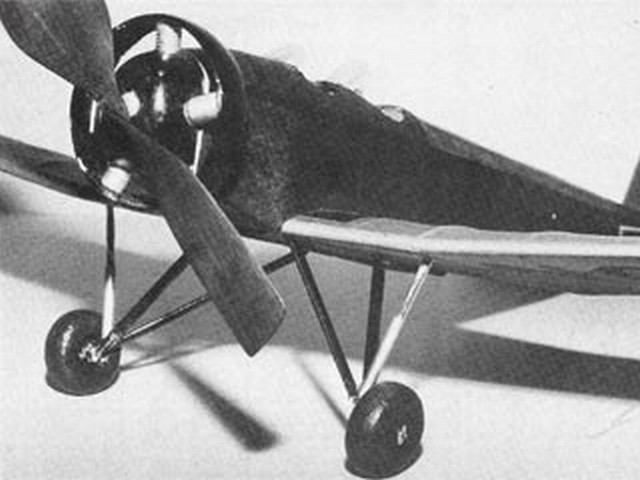