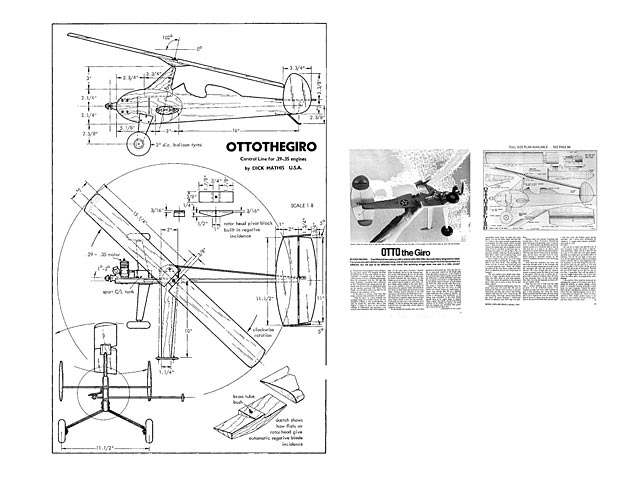 Quote: "Fast Richard has come up with a winner with little Otto, the cute rotary wing bird for Ukie! It's a pure auto-giro without a horizontal wing, and will give everyone a head-turning thrill at the flying field. it's different, but not just to be different - how many free spinning wings does one see in a Ukle circle?

Possession of an autogiro is not a thing to be undertaken lightly. For example, the kind of airplane one is seen with reflects on one's character. A modeler with an Indoor Microfilm job has to have a different personality from his counterpart with the 150 mph Rat racer. Similarly, a modeler who is attracted to RIC Unlimited Pylon racing must be dif-ferent from the one who sits flipping the prop on his ignition powered Old Timer Free Flight. It is therefore safe to say that we are known by the airplanes we fly.

If the above is correct, what does that make a person who possesses an autogiro?

'Otto the Giro' is a pure autogiro (no vestigial wing) for U-Control flying. He was designed without a real understanding of why he should fly, and then, after a few flights, it began to dawn on me (another triumph of superstition and ignorance over science and rationality) that what happens is this: (1) the rotor spins clockwise (viewed from overhead), driven by the forward motion of the craft through the air, (2) the rotor is caused to spin by a difference in the angle of attack between the two blades; (3) the blades are set at negative (the reverse of what you would expect) angles to each other; (4) as a blade comes around in the same direction as the airplane it has a lower angle of attack than the opposite blade and therefore less drag; (5) this makes the forward moving blade continue around (because it has less resistance) and become the blade that is moving down-wind toward the tail; (6) because the blade has a negative angle relative to the other blade (which is now moving upwind), it presents its underside so the airstream as it retreats; (7) the air striking this blade castes both lift and very high drag, which makes it continue around.

So the blades lift whether they are on the upwind or downwind leg. Note that the airfoil is backward relative to the flight path when the blade is going aft, so this makes it less efficient than when it heads upwind. But the difference in airfoil efficiency (and relative airspeed) downwind is compensated for by the greater angle of attack, so both blades lift about the same and the craft flies level. The plane is rotation of the rotor is highly inclined (the ship flies tail low), so both blades are always flying at a high angle of attack even though they fly at a negative angle within the rotor's plane of rotation.

All of this is obviously very inefficient, so the lifting area embodied in the rotor blades should have to be pretty large to support flight - right? Not really, because the lifting surfaces in the blades are going a lot faster than the airplane and, therefore, they generate a lot of lift for their size..."

Quote: "Steve / Mary, Here is a fullsize set of plans for OTTOTHEGIRO autogyro by Dick Mathis. It is for control line .29 to .35 engine. Its rotor span is about 30-1/4 inches, fuselage length is about 24-1/8 inches. This plan is derived from a January 1974 Model Airplane News Magazine"

Update 19/03/2021: Replaced the article file with a complete version, thanks to JedBond. 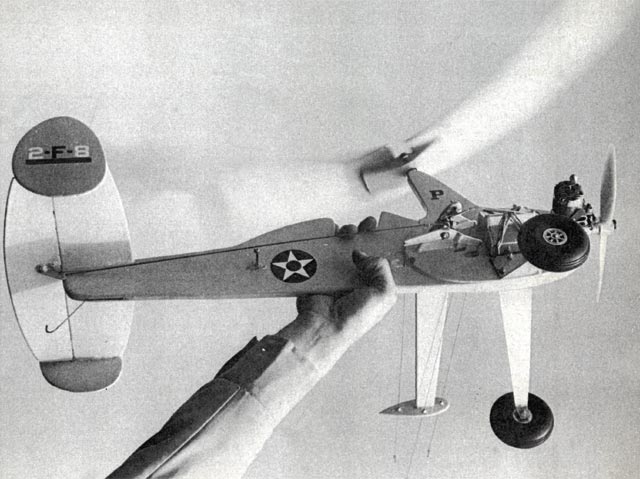 There seems to be a page missing (p.18) in the article. Would be nice to have if someone has a copy.
DavidBeazley - 04/01/2016
Our control-line club, ringmastersflyingclub.com, built several "Otto"s as a club activity. I'm sending three photos [more pics 003-005] and suggest a visit to our website to see a video of the first one fly. Rotor wasn't balanced and began to hit the tail. The second video is the second model and did much better as the owner is a retired engineer.
EdShearer - 03/10/2016
Here are some in-flight photos of Otto the Giro being piloted by Allan Perret [more pics 006-009].
EdShearer - 09/02/2018
Add a comment