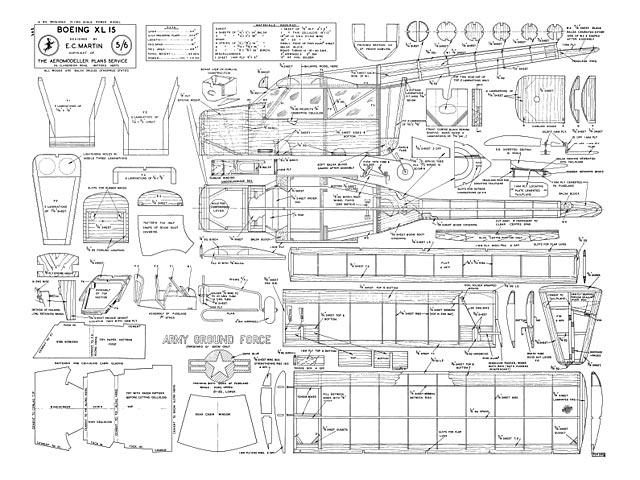 Quote: "UNUSUAL in outline, and outstanding as a scale model, the Boeing XL 15 is ideal for 1-2 cc diesels. Its simple structure and crash-proof wing mount enhance the unique appearance of its pod and boom layout.

Wing fixing. An explanation of the wing fixing given first may make the construction more understandable. The idea, borrowed with thanks from Evan's Jaguar Wakefield (oz584), is the use of a pair of wing pegs made from four laminations of 1mm ply, cemented together over the middle portion only. When turned sideways these pegs can be pushed through the fuselage centre section, and when turned upright are locked into position. The protruding ends are a push fit into peg boxes in the wings. These peg ends, not being cemented, are flexible in the backwards and forwards direction, but are rigid up and down, so giving a good knock-off wing mounting. Other advantages are that the pegs are easily replaceable if broken; dihedral angle is easily altered if necessary; and the interior of the fuselage can be kept clear of non-scale protuberances, which in this model would be very noticeable.

Fuselage. Laminated Formers: Because of peculiar shape and open construction of the fuselage, the assembly is based on the use of laminated formers, F1, F2, F3, F4, F5 and F6. Laminated formers are strong, rigid and make for accurate alignment in assembly, and they are definitely worth the extra trouble. Construct as follows. Strip 1/16 in sheet into 3/8 in wide strips, and cut from these the shapes shown on the plan; one set for each lamination. Pin a sheet of waxed paper on the plan, and cement the pieces forming the first layer on to this paper, when they will be held in position sufficiently well. The next layer is now cemented on top, so that the strips overlap the joints of the first layer, and so on; it is this overlap that gives the strength at the angles. When dry, the formers can be stripped from the wax paper, and chamfered where necessary..." 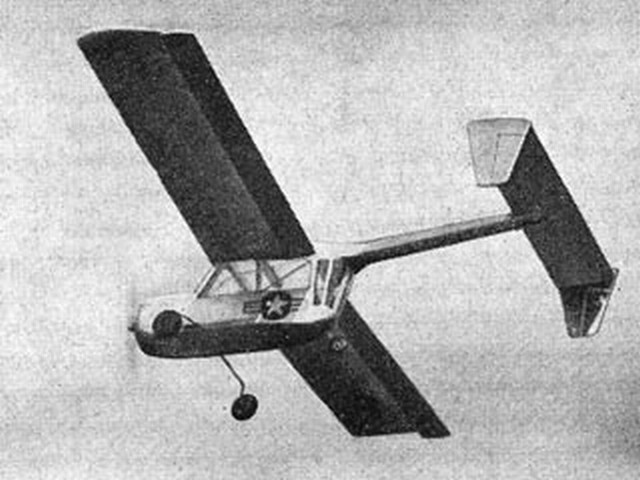