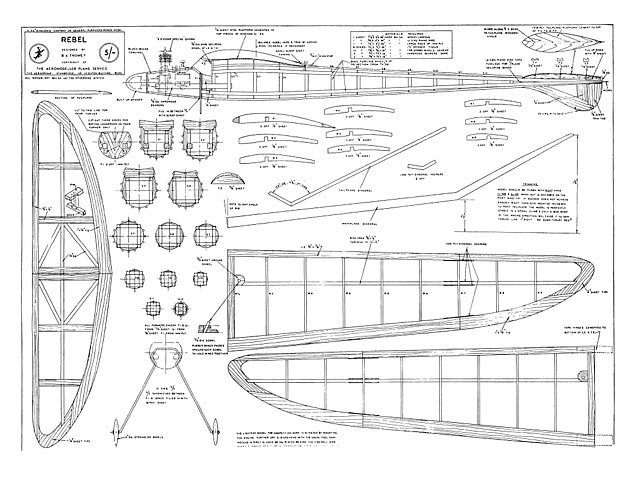 Quote: "The Rebel, as its name shows, was designed with a view to being 'out of the rut' as well as being efficient. Though it has no particular claim to beauty, it is at least different.

It has an excellent glide, largely owing to its low-drop streamlined fuselage and its vee-tail, which gives considerably less drag than the conventional tall formation. Its climb is a tight spiral which is perfectly stable. In fact, those theorists who condemn the vee-tail on the ground of spiral instability, should think again, for the Rebel can out-spiral many a pylon model.

As to performance, the Rebel broke the Club Ratio Record when flown in dull, drizzling November weather, with a flight of 2:45 on 18 secs motor run (ratio of 9:2). The engine was an old one, giving only 4,200 rpm.

Building Instructions. Fuselage:The fuselage is as strong as a horse. The first thing to build is the slab-sided box of 1/4x 1/4 in balsa, then the 1/16 in sheet formers are cemented in place, followed by the 12 stringers of 1/8 x 1/8 in which are glued ON TOP of the formers and not slotted in. The undercarriage and engine bearers are firmly fixed. The wing platform is covered with 1/16 in. sheet, and the platform for the vee-tail is made of 1 mm. ply. The underfin, which carries the rudder, is also fixed in place, now.

Wings. Construction of the wings is straightforward. It may be worth mentioning that I personally prefer to build the whole semi-wing flat on the plan, first before cracking the tip up to the required dihedral angle and inserting the ply braces.

The reader may be wondering about the pros and cons of hinging the wings. Personally, I am sure that my wings have been saved from breaking many a time when (as so often happens on rough ground) the model has tripped up on landing. However, these hinges have saved my Rebel from worse things than a mere cracked wing, and the story is worth telling..."

Update 05/01/2016: Replaced this plan with a clearer copy (patterned background removed) thanks to TonyP. 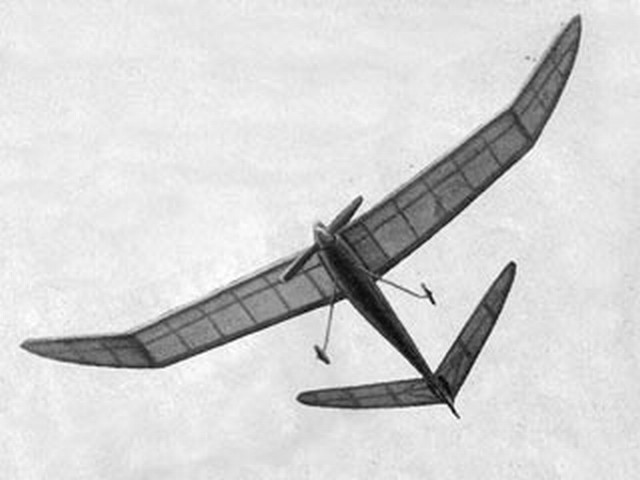