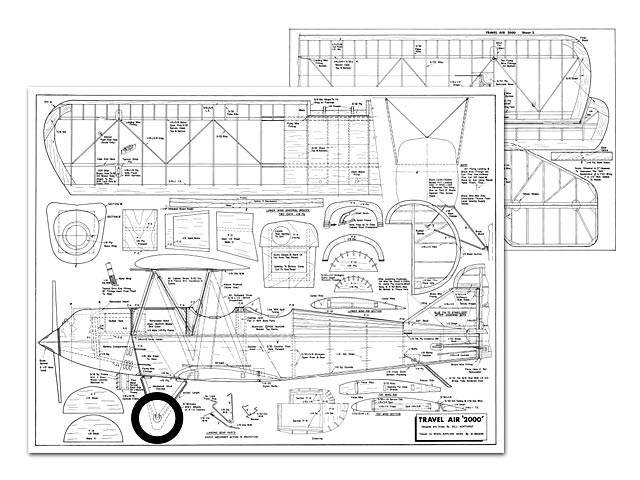 Note this plan was published in MAN November 1965, then reprinted in Model Builder July 1972.

Quote: "The author is a confirmed, incurable, biplane addict. The addiction has recently become strong enough to require a 'fix' at least once a year. Complete relief comes only in the form of designing, constructing, and flying some sort of two-winged R/C airplane. A scale ship has a longer lasting effect than an original design.

The Travel Air 2000 is a thorough and long lasting treatment, requiring no deviations or additions to the original formula. It has generous horizontal tail area, a decent nose moment, enough dihedral for multi control, and best of all, an inline engine configuration (Curtiss OX-5).

There are only two problem areas, neither of which is insurmountable, but nevertheless existent. Since ailerons are in the top wing only, the operating servo must either be mounted in the top wing, center section for conventional connection, or in the bottom wing, which requires more complicated though scale-like linkage. The second problem results from the location of the rear landing gear strut. It coincides with the position of the lower wing front spar.

Our model was constructed with plug-in bottom wings, which took care of the landing gear problem and neces-sitated the simpler alternative in regard to the ailerons. However, this created a third problem. The outerplane struts became functional, which meant that you couldn't hardly do without them. It also meant very precise fitting and alignment of the plywood tubes to receive the plugs.

The plans show a revised lower wing which can be built in one piece. Although it is locked in place on the fuselage, it won't suffer any more than the plug-in, type in the event of a ground loop or cartwheel. A possible bonus to this arrangement is that the aileron servo may be mounted in the lower wing, which would allow the modeler the dubious pleasure of employing the aileron control strut in prototype fashion. If mounted in the top wing, an extension cord must be rigged from the servo, down a cabane strut, and through the front cockpit to the receiver output connector.

Liberties were taken in two areas of scale reproduction. One we felt necessary, the other was for aesthetic reasons only, and could easily be dismissed. The airfoil thickness has been increased over the scale 3/4 in depth which is not much to work with when you realize the model's wings will be cantilever construction, having no help from landing and flying wires. There's also the problem of squeezing in a servo. The second liberty was the 1/2 in of dihedral in the top wing panels. For some reason, a straight wing on a model always appears to be sagging, particularly when there's another wing underneath that's tilting up toward it. The top wing is supposed to be straight, and unless you sight down the leading edge, the slight dihedral is not evident. If you're planning to enter scale competition and fear loss of points, go ahead and build it flat. It won't affect the flying ability, but like we said - yeuch!

Speaking of scale competition, the most consistent complaint from scale fidelity judges is the lack of information in the way of full size dimensions and the scale ratio of the model presented..." 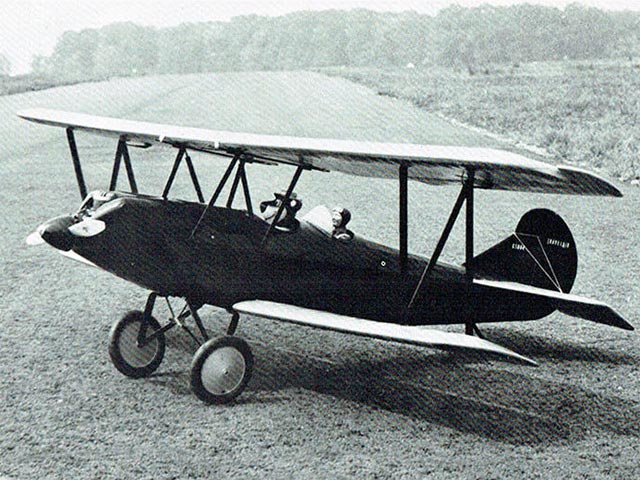