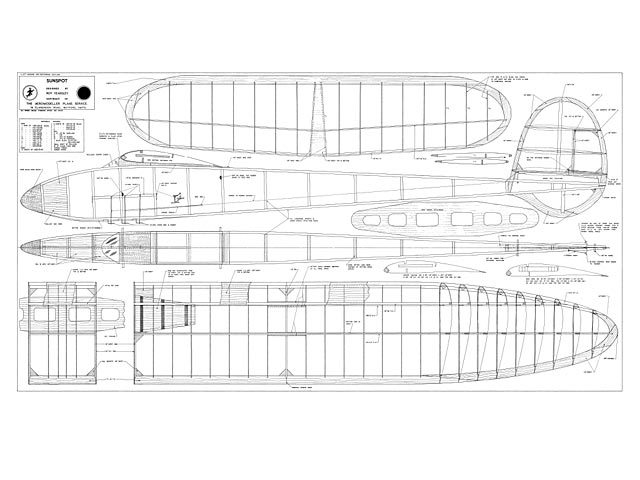 Outsize in gliders and one of the most consistent performers amongst the 1946 British designs, is Roy Yeabsley's ten foot Sunspot.

You can build it in just over a week and the total outlay is only a fraction of that needed for a petrol model. The ultra light wing loading (weight is only 2-3/4 Ib) rules out major crackups due to high speed contact with cars and other obstacles on the deck. Exceptional stability enables you to keep flying when other jobs are grounded by rough weather.

As for performance - the model has practically been all over the country on a solo goodwill trip! Best official flight at time of writing is 20 : 10 on a cloudless day - the model disappearing out of sight overhead dead above the launching point. On a 300 foot towline, consistent non-thermal flights of three minutes are turned in every time.

A dethermaliser is essential for this design. One of the parachute variety is used on the original model and is released by means of a slow burning fuse instead of the usual timer..." 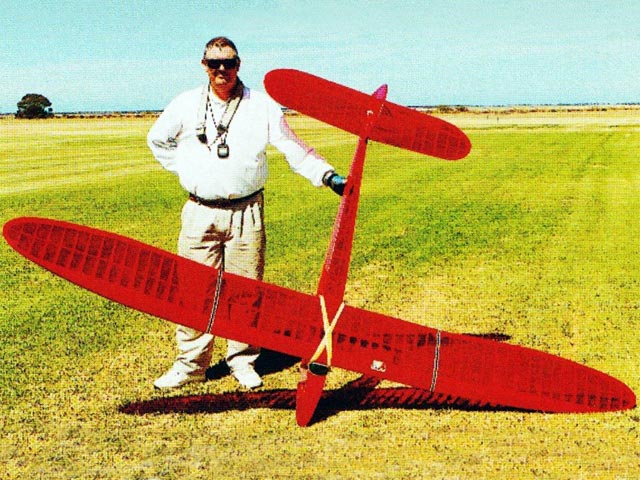 Unfortunately no indication is provided regarding the amount of outer wing dihedral.
Dieter Prussner - 06/01/2020
Bottom right corner of plan at wing tip. 9-1/2 inches at tip. Each side.
Mhodgson - 06/01/2020
Some diagonal bracing on the fuselage might be welcome for no great weight penalty, and if possible on the wings as well. The latter would not be so easy, but it might help with warping.
Miguel - 07/01/2020
This is a photo of my Dad with a Sunspot he built [more pics 003]. I think it was 1970, still have it in my garage. Dad liked painting the models, think it's rather more decorated now. All covered in tissue, doped and then painted in Humbrol enamel.
AndyG - 22/05/2020
Add a comment