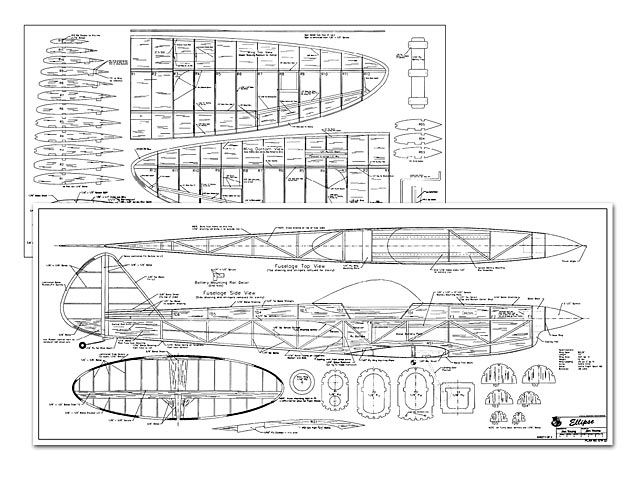 Quote: "For the past few summers, I have had the honor and privilege of flying my club's giant scale DC-3 at several local IMAA events. I had a lot of fun at these events but never had a plane of my own large enough to fly at these meets. It would have been nice to become familiar with the airspace with my own plane before taxiing out the DC-3. I have built several electric powered planes and have enjoyed clean, quiet flight. So why not build an IMAA size electric?

After knocking around several ideas, I settled on this design with an elliptical wing planform and a sleek fuselage. There is even a little DeHavilland influence in the tail feathers. Several people have told me that it looks like an early CAP series or a Chipmunk, but it's not. What else would you call a plane with an elliptical wing and stabilizer but the Ellipse (emphasis on the 'E').

The elliptical planform has low induced drag. That, coupled with the sleek fuselage, make this a fast, efficient plane. It has a long tail moment for smooth control and enough side area to sustain knife-edge flight. The 12% semi-symmetrical airfoil provides plenty of lift, low drag, and good inverted flight. This is an all-around good flying plane.

It will greatly speed the construction if you 'kit' the model first. The hardest part will be cutting out the wing ribs. Compufoil makes it easy to plot out wing ribs for an elliptical planform, but you'll have to cut them two at a time. All construction is with balsa, spruce, and aircraft grade birch plywood. Do not substitute lite plywood for any of the plywood parts. Lite plywood does not have the necessary strength. The prototype has been flying for four years and the airframe shows no signs of weakness. Take your time and make the joints fit before gluing.

Construction. Tail Feathers. Start construction by laminating the wingtips and tail feather outlines. Laminating balsa is an easy way to make light, but strong complex curves and shapes. Cut templates from corrugated cardboard to the shape of the inside edge of the piece. Mark a few key locations (like rib and spar locations) on the templates..." 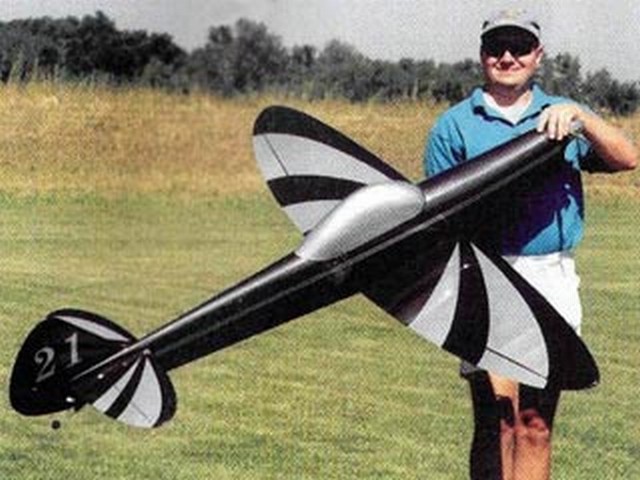