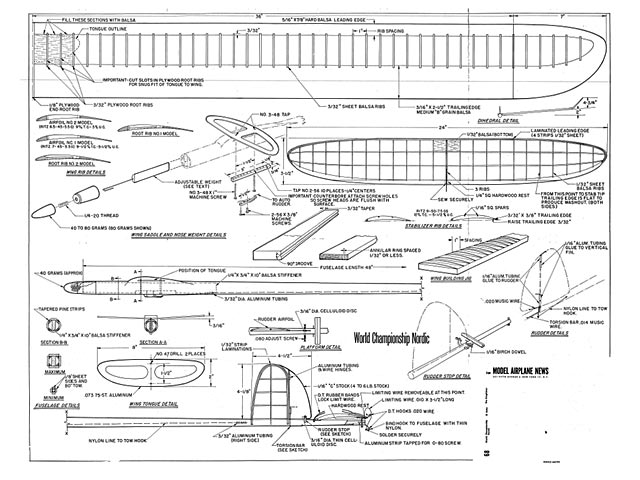 Quote: "Complete building instructions and plans for the Continental, greatest USA towliner to date, and the first place winner at Bourg-Leopold, Belgium. This is design at its finest! World Championship Nordic, by Gerald Ritz.

Ever since flying in the Nordic finals in Czechoslovakia in 1957, I had been mulling over a design for a Nordic to take the best possible advantage of the European weather conditions. A description of the weather would be relatively calm air, average low humidity with frequent light showers, and light, small-diameter thermals. In summary, the weather is more 'delicate' than the average weather in the States, and the model must be designed to be compatible with these conditions.

In June, when I won the Nordic eliminations and Cen-tral States semi-finals for a place on the US team, I quickly got down on paper all my thoughts on the model for Euronean air conditions. It took all of my spare time during the month of July to design this model. There were good reasons for this. First of all, the model must have a very slow, flat glide, and excellent stability to be able to more surely feel out and take advantage of the light European thermals. Secondly, the model must be completely adjustable for every phase of flight control, and last but not least I wanted the craft to be as asthetically perfect as I could make it, as my feelings about Nordic are such that I could not countenance flying a semi clap-trap model. I built the first model of this design, dubbed 'The Continental', in the first week of August and took it out to the DeKalb Cloud Dusters Contest to test fly. It was an ideal day without too much wind, and I got in nearly 40 Nordic flights, including one stretch of 17 maxes in a row. Glide was satisfactory for a start, but tow control was not all that I wanted. The second model was underway at this time, and I put in a little more dihedral and a longer moment arm. During the second week of August and the following weekend, I spent all my spare time flying like mad - over 300 flights inside of 10 days. The second model towed beautifully and, due to a slightly higher-cambered section, had an even slower glide and lower sinking speed than the first, so it became my #1 calm air job.

I might add that the performance of these ships was all that I had hoped for, and in fact was so outstanding in test flying the day before the International meet in Belgium that the French team, among others, openly said that they would bet that I would win. In the contest itself, the tow feel was so sensitive that on each flight, I knew the model was in thermal air before I let it go. Even on the fifth flight, when I let the #2 model off the hook at a height of about 80 feet on making the 3/4 turn, I wasn't too concerned, as I knew the air I was towing in had more upward movement than the sinking speed of the model.

The rudder with its lifting section and large tab does not allow the model to slip or bank away from a thermal cone, but tends to force it inward. The very short nose coupled with the long tail moment and super light tail give the model terrific stability and recovery..." 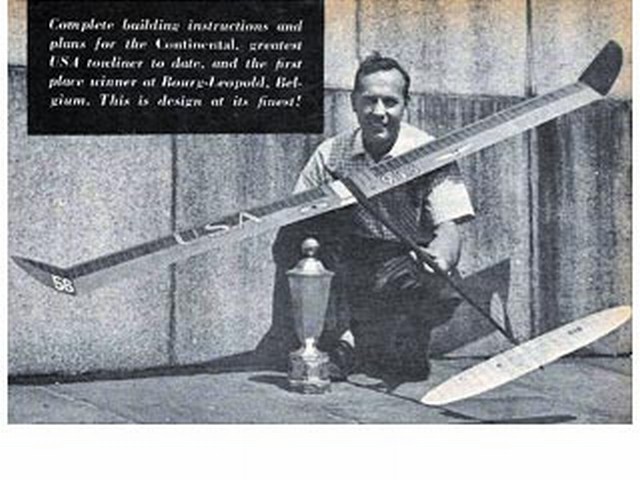