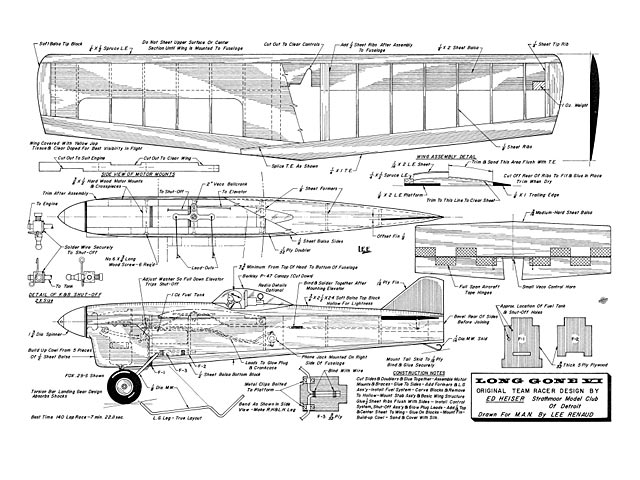 Quote: "Best combination we know - good looking, distinctive aircraft with top performance - our Team Racer has yet to fail in any contest entered. Long Gone, by Ed Heiser.

The Long Gone team racer is the result of a long line of ships, the first was built and flown in the summer of 1957. Since then, eight more have been built, the last four being identical ships and each has truly earned the name, 'Long Gone'. They have logged hundreds of hours and miles in five years, during which only one consolation race had to be flown (blown plug). In its record to date, in fourteen AMA and Canadian sanctioned contests, it has never failed to bring home the hardware. Its best performance was this year at a contest held in Garden City, Michigan, where it won the feature 140 lap race in 7 minutes and 22.8. seconds. This was done using a stock Enya .29 and a modified Power Mist fuel.

Through experience, many features were built into later versions to insure trouble-free operation and desirable flight characteristics. The use of a built-up wing serves two purposes. Firstly, the wing is interlocked with the fuselage, the bellcrank then can be mounted to the motor mounts relieving stress on the wing. Secondly, the wing is covered with colored Jap tissue, usually yellow and clear-doped. When the plane is flying, light striking the wings reflects a brilliant yellow which is easily seen by both officials and pit crew. This is important, being able to pick out your plane and to keep better track of laps completed during a race.

Oil seepage is the deadliest enemy of a plane that is required to fly a gruelling twenty-mile an afternoon, many times during the flying season. This ship is completely sealed from the firewall back including the tank, which has caused no trouble to date. The use of a torsion bar-styled landing gear was an idea incorporated from stunt ships. The landing gear will absorb most of the landing shock without transmitting it to the airplane itself. The many landings required by a team racer, (many are far from of smooth), illustrate that this type of gear is almost a must. Without it, the plane will eventually start to fall apart at the joints, as many of you know.

The fuel system is the most important part of any ship. There are many pros and cons on the subject of pressure systems against conventional systems. My theory is the simpler the system, the better the system; this is the reason for no pressure tank or system .being used. The use of a K&B Sure-stop Shutoff, modified as shown on the plans, will give sure engine stops and cannot be shut off accidentally in flight. It is set up so that only on full down elevator will the plunger be tripped, a quick jerk of the down line will do line, and won't endanger this ship. The tail gives a little wag or wave without loss of flying speed or altitude.

I have installed an electrical system in the plane. The use of a telephone jack does the trick. It eliminates the need for clips and trying to connect them. This takes time, and ina race every second you can gain is to your advantage. We have been using the shirt-pocket ABC wet-cell batteries, using a long cord and running it down and out ourselves..." 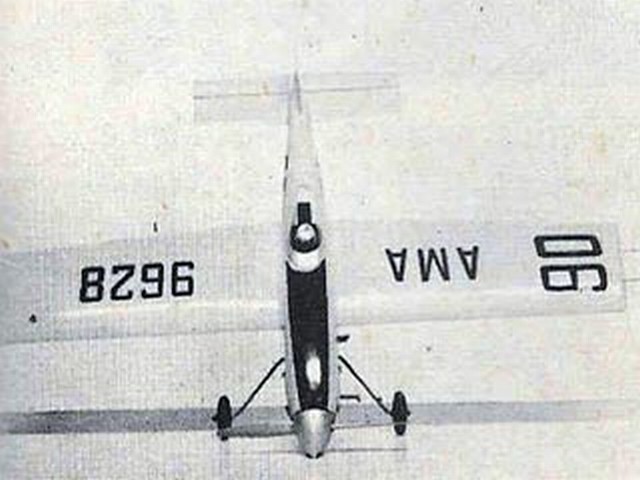