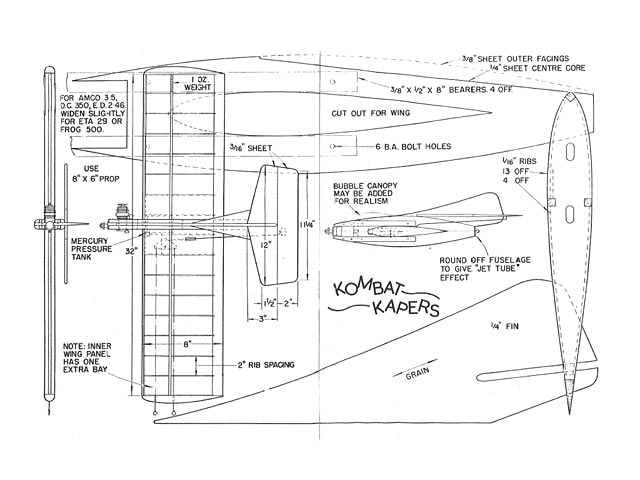 Quote: "For the stunt man who feels he has reached a zenith in his control-line career - or for that matter, any modeller bursting with confidence in his acrobatic abilities combat is the comning thing. All the thrills of straight stunt flying combine with the spectacle of team racing to make combat flying the most exciting event at any model meeting. Try it, you'll like it just as much as the Meanwood Independent Modellers of Derby, who developed the specially tough 'quickie' overleaf. With four engine bearers, solid fuselage and stout wing structure, this is as strong as any stunt model could be, and it will go through any manoeuvre you care to name.

The originals, usually built in three evenings apiece, were powered by Amco BB 3.5 diesels; but so adaptable is this four-bearer system that any beam mounted engine of 2.5 to 5 cc will fit without alteration, except perhaps removal of a sliver of wood on either side to accommodate the larger crankcases of some engines.

Full size parts are given on the next pages, and all layout detail is easily obtained from the 1/4-size scale drawings. In fact, no plan is needed for you to build Kombat Kapers since a few lines measured on the building board will suffice for the wing construction, and the tail parts can be drawn straight on to the balsa sheet.

Start with the 1/4in sheet, cutting out the fin outline and the centre core of the fuselage. The four bearers are cemented and bolted on each side of this centre core, the fin added, and soft 3/8in packing used to fill out the sides to a total of 1in thickness. Note that between the bearers, the packing should have its grain running vertically. Carve to a streamline shape..."

Quote: "Hullo Steve, you are doing a great job for aeromodellers, around the WORLD... thought you may like this one... Kombat Kapers, was THE MODEL in the mid 50s, in Broken Hill, Australia, with our control line fans. Frog 500s bellowing away... it was a full size drawing in Aeromodeller January 1954..." 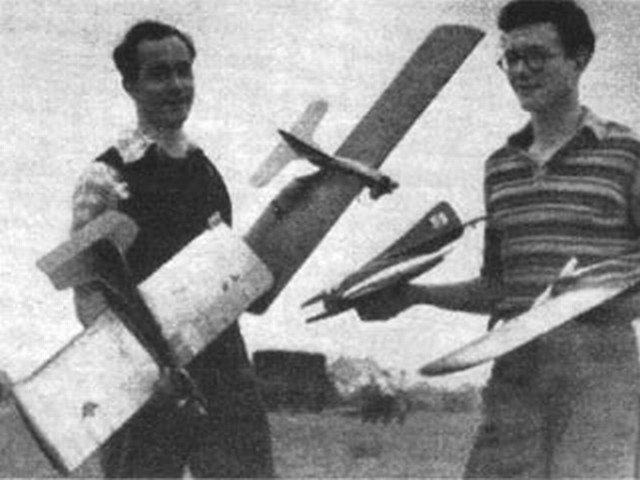