Quote: "A high performance contest C gas model that looks like a real airplane. Al Pardocchi has produced some of the finest and most consistent planes ever built. Therefore, when he told us he had completed a new ship we expected to see an outstanding job, we were not disappointed. The Air Warden is not only pleasing to the eye but sensational in flight. Despite the fact that the motor did not deliver maximum power by any means, the ship turned in four consecutive 6 minute flights on 12 second motor runs. They were not thermal flights - the Air Warden simply attained such altitude in those 12 seconds, and the glide was of such excellence, that the ship hung up there. Modelers will not make any mistake in building the Air Warden; it's one of the most efficient performers we have ever seen and at the same time it looks like an airplane.

THE Air Warden was particularly busy on the Sunday that club director Mr. Moon came out to see it fly. A few hours before he arrived a flight had been made with a 17 second motor run. Shortly after the takeoff the ship, hit for the clouds, climbing steeply in a wide left circle under power. It seemed as though the motor would never cut; but finally the ship began a tell-tale lazy circle to the left. Far above the other ships it seemed to hang in mid-air while a slight wind carried it down the field. Apparently it was headed for the 'last resting place of lost models' so we piled into the car and began the chase. After a wild 10-mile ride the ship was recovered and upon returning to the field we learned it had been in sight 32 minutes.

Many other flights like this have been made since. So here we proudly present a real contest ship that doesn't look like the dream of a madman. Due to fine aerodynamic design, similar to the 'Meteor' appearing in the September issue of MAN, it gets the results that all modelers want - real performance.

Despite the fine curves, the sleek fuselage and general contour, the Air Warden is not difficult to build. First make a full scale layout of the plane to simplify building and to reduce possibility of mistakes. Fuselage construction is built around a longitudinal crutch, 44 inches long, formed of two stringers..." 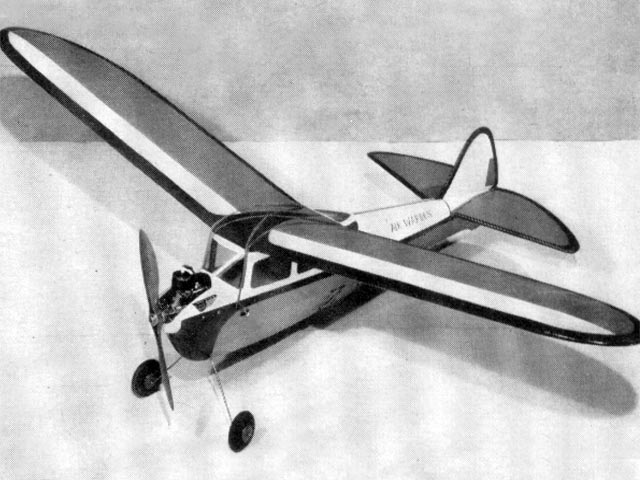