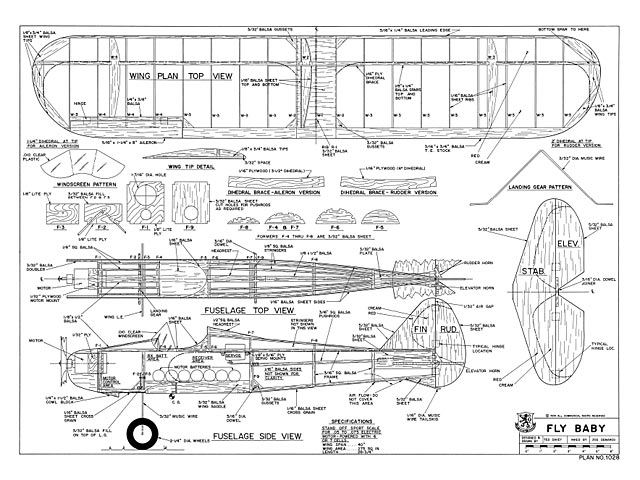 Published in RCM, this design was also later kitted by Davey Systems, see below for kit review.

Quote: "Try this electric Fly Baby - it flies as nice as it looks. Fly Baby, by Ted Davey.

The Fly Baby Sport Scale Project presented here is the result of a search for a low wing, electric powered sport flier. What I wanted was something large enough to have a reasonable wing loading so that it would not fly like a brick, but small enough to fly well on a modestly priced motor. I also wanted a model that looked like something. The Fly Baby filled the bill on all counts.

It flies as nice as it looks on an 035 Cobalt, a variety of 05 ferrites and the DSC 075, my own product, and a Master Airscrew 8 x 4 Fiberglass propeller for the larger motors. I always fly with some type of motor control whether it be a simple on-off for a sailplane or an electronic throttle for this type of sport flier. Simply turning on the motor and letting the model fly until the batteries run down not only heats up the motor and/or batteries, but it is not a very relaxing way to fly. I have used both an old Adams and an Astro Flight electronic throttle on the Fly Baby. I recommend either approach as the most enjoyable.

The easiest way to build the Fly Baby is to first make a kit by precutting all of the parts. The parts list shows the amount and type of wood you will need. The only item that is a little different is the 5/32 sheet used on the tail feathers which is made from 3/16 sheet sanded thinner once the parts are cut out. I've gone to the 5/32 rather than the more readilyu available 1/8 because it minimises the chance of flutter at high speeds..."

Complete with its own Hyperthrust 075 motor, this semi-scale electric is a good entry kit for an experienced flyer who wants to try R/C electric models.

It had to happen sooner or later, I guess, but whenever it does you're not prepared for it. I've been reviewing model airplane kits since 1981 and this is the first time I had a plane crash on the first flight. Our club's resident instructor was at the sticks and I was taking flight shots. The Fly Baby was just coming out of a turn into a breeze of no more than five mph when it nose dived straight into the ground from about forty feet high. No snap, no spin, just straight in. Maybe it was interference, or maybe pilot error. We'll never really know.

It's a real cute little plane, so I decided to fix it up since the damage appeared to be repairable. But first, let me tell you about the kit and how it builds and we'll talk some more about how it flies later on.

This could have been the easiest model I have ever built. It came close, but no cigar. Perhaps if the instructions were more complete. Even so, it certainly went together fast. I was stepping back to admire my handiwork before I realized it was done. The Fly Baby is a neat little ship that comes in a neat little box that contains all the wood, almost all the hardware, and if you get the 'electro-combo package', the motor that you need. Your trips
to the hobby shop are limited to acquiring (if you don't already have) a radio (3 channel minimum), wheels, wheel collars, motor battery, covering, glue, and an on/off switch or proportional throttle to control the motor with your radio.

The motor that comes with the combo kit is the Hyperthrust 075 electric motor which is prewired with an on/off arming switch, a fuse, a capacitor designed to suppress radio interference from the motor and a Tamiya style connector. It also comes with a prop adapter and a Master Airscrew 8-4 propeller. No instructions are provided for break-in, however, so I hooked up the motor to two 'D' batteries in a Radio Shack holder and let it run (under no load) until the batteries wore down.

But I'm getting ahead of myself. I told you that the Fly Baby was easy to build - so let's talk about some specifics.

Gettin' it together: Fuselage. The instructions tell you to build up the fuselage, stick and tissue style, over the plans using n'is-inch square balsa sticks. Complete the framework for one side, remove it from the plans and then build the framework for the other side. Once these frames are done you are to glue them to precut 1/16 balsa sheet sides. I noticed that the precut sides didn't correspond exactly to the shape shown on the plans. If I followed the instructions I would have had frames that didn't match the sheet sides. The differences were minor, but rather than give myself the extra work of trimming the sides, I decided to build the framework directly on the sheet sides. I marked off the location of all the verticals on the sheets and, using Satellite City's UFO cyanoacrylate, I 'hot-stuffed' the 3/16 balsa sticks directly onto the sides. The procedure worked great, and in no time at all, I had the sides ready to join with the firewall, the lone former and the cross braces..." 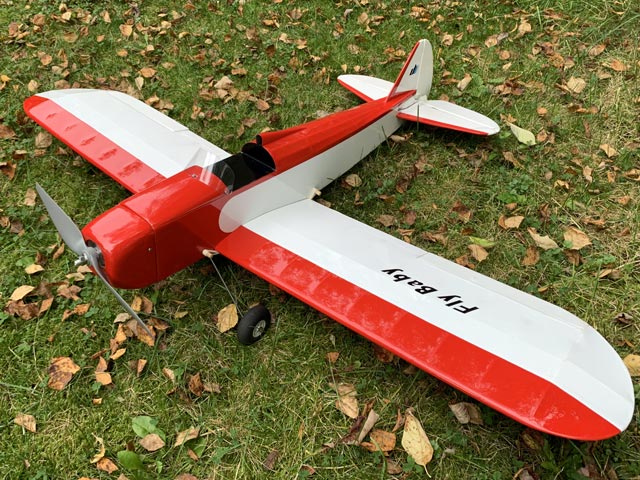 Hi Steve, I see you just posted the RCM plans for Ted Davey's 40in Fly Baby. I finished one early this year from these same plans [see more pics 005 & 006.] I made the top a removable hatch for battery access, added some sheeting top & bottom at the nose, but the rest is built as drawn. It's powered with a Firepower 450 Sport motor (1100kv), 30amp ESC, 1800mAh battery on an APC 9 x 4.5E prop. Sorry I don't have flight information at this time, it's still waiting to see it's first flight. Thanks again for a great website!
PaulS - 22/12/2015
Add a comment