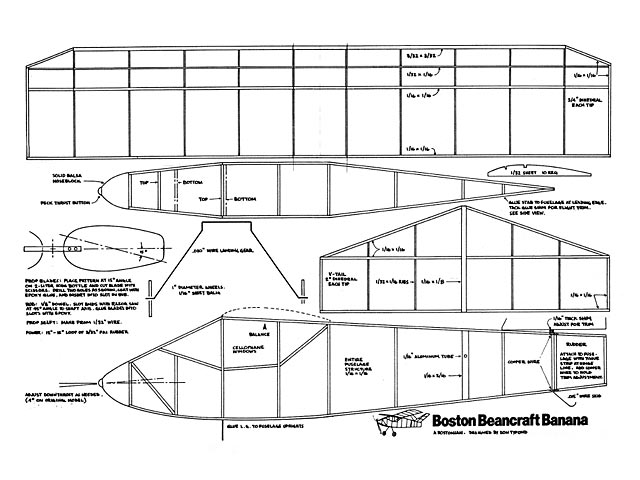 Quote: "Here's a Bostonian with its own personality, via a V-tail configuration. Construction is straightforward and simple. Plus you can learn how to make practically indestructible plastic propellers too!

Does a V-tail a Bonanza make? No, but it does add a bit of distinction to what could otherwise be a typical Bostonian. And it allowed me to come up with a silly name, which seems to be a big part of the model design business. This airplane obvi-ously bears no resemblance to a Beechcraft Bonanza, but it does look like it could be a homebuilt. Imagine a couple of engine cylinders sticking out the sides of the cowling and see what it does for you.

Construction is, as they too often say, straightforward. In fact, this design is just about all straight lines, which makes it very easy to build. No need to go into a step-by-step here, but there are a couple of things to keep in mind as you go.

Notice when you build the fuselage sides, you don't want to build the rudder as part of them. You need two fuselage sides, but only one rudder. Come to think of it, I guess this really should be referred to as a Y-tail rather than a V-tail. I had originally intended to make adjustable ruddervators, but couldn't come up with a way to do it simply and without adding dreaded tailweight. So I compromised by using a sub rudder for yaw control and making the stab trimmable for pitch control only. This is similar to Art Chester's 'Swee Pea,' if you remember that old Goodyear racer. Once the fuselage and rudder are finished and covered, use a strip of 1/8-inch wide tissue along the hinge line to attach the rudder to the fuselage. l attached mine on the left side only because I fly this model in left cir-cles. A couple of pieces of copper wire at-tached across the hinge line at top and bot-tom will hold the rudder adjustment. Wilhold RC-56 glue is good for this as it adheres well to the wire and is flexible enough to withstand bending. You could also use RC-56 to attach the landing gear wire to the fuselage, or use CA glue and accelerator.

The wing is built flat on the board. As-semble the leading edge, trailing edge, tip outlines, and ribs. Add the spars in the center section only, then cut the leading and trailing edges just outside the center section, block up for proper dihedral, and glue them back together. Now add the spars to the wing panels, noting that they angle down straight from the last rib to the wingtip. Either notch and break the spars to do this, or make the tip sections of the spars from separate pieces.

Build the stabilizer flat, but don't glue the two halves to the center 1/16 x 1/8 piece until you've blocked them up for proper dihedral. Note that the stabilizer is glued to the fuselage at its leading edge only. A 1/16th-inch thick shim is inserted under the stab at the tailpost of the fuselage and lightly tack glued in place. This way the shim is removable if you need to change its thickness for flight trim.

The noseblock is carved from balsa, and a Peck-Polymers nylon thrust button installed. The original model required about four degrees of downthrust, so you might want to drill the hole for the thrust button at this angle initially and make final thrust adjustments with noseblock shims. Add four balsa strips in the shape of a square, 1/16th-inch in from the edges..."

Quote: "Hi Steve, I saw this model on youtube see href='https://www.youtube.com/watch?v=JiMozEA9DAs and then saw that it wasn't listed on Outerzone. See http://www.rcgroups.com/forums/showthread.php?t=262573

Update 27/04/2020: Added alternate plan in vectorPDF format, thanks to StanHuyge.

Quote: "As an exercise in learning to use Inkscape, I redrew Don Typond’s Boston Beancraft Banana as a vector drawing. Anyways, here it is." 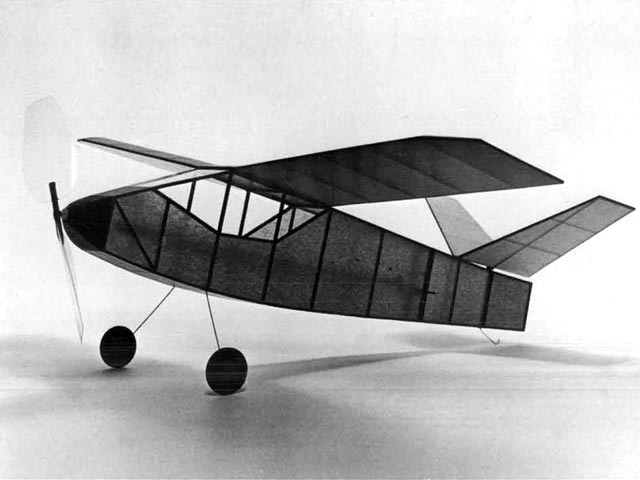 Hi Outerzone, Here is a photo of my BBB [pic 003]. The pink tissue was salvaged from a Mother's Day present given to my wife. Yet to maiden but I have high hopes. Thanks for a great Web site,
Steve Styx - 13/04/2020
Add a comment