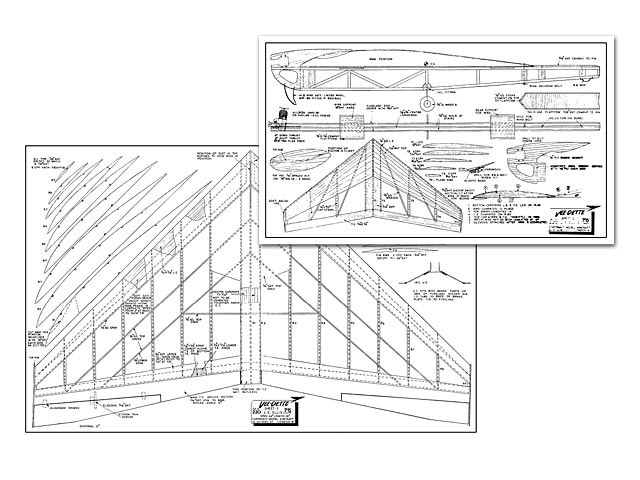 Quote: "VEE-DETTE is the twelfth in a series of experimental deltas and the third in the series to utilise a tailplane. Flights without the latter indicate that it is a definite advantage, giving more stable and controllable flight.

Vee-Dette was built in a big rush to have it ready for the 1954 British Nationals and up to the time it was entered in the Bowden Contest it had had only 12 powered flights to its credit. At this time it used double acting elevons and it was extremely sensitive to adjustment. The fact that it gained sufficient points to gain second place was very encouraging especially because it was competing against conventional models. The elevon system has since been modified to that shown on the plan and the model now flies 'in the groove.'

The model is extremely robust and can stand rough treatment. It has on one occasion survived a powered spiral dive into a concrete runway, the force of which was sufficient to snap the rubber bands on the tailplane and smash a KK spinner. The only damage to the airframe was three shock tears in the wing covering. Two minutes repair with Cellotape and the model was in the air again. However, powered spiral dives are not recommended!

The plans have most parts shown full size and the model is very easy to build, so rub the plans with soap or candle tallow and start construction preferably after cutting out all parts for rapid assembly.

Wing Pin down the 3/32 in leading and trailing edge pieces on the plan and cement in place all lower capstrips. The centre-section cap-strips are 3/32 x 1 in sheet. These may be cemented to the LE and TE but do not cement along the centre line - the dihedral angle is formed here. Lay the lower 1/8 in spars in position and pin in place temporarily..." 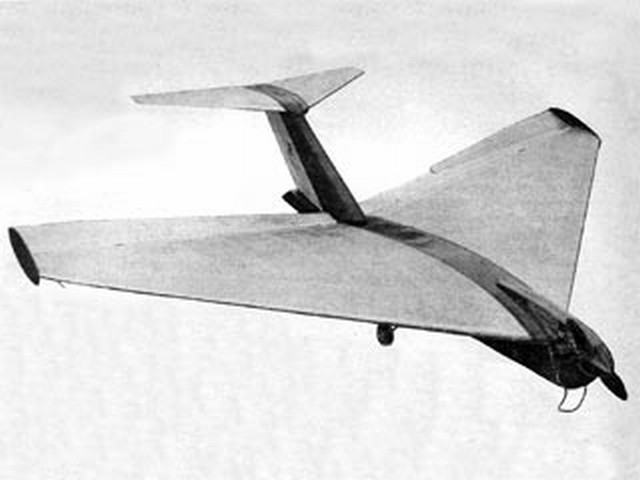