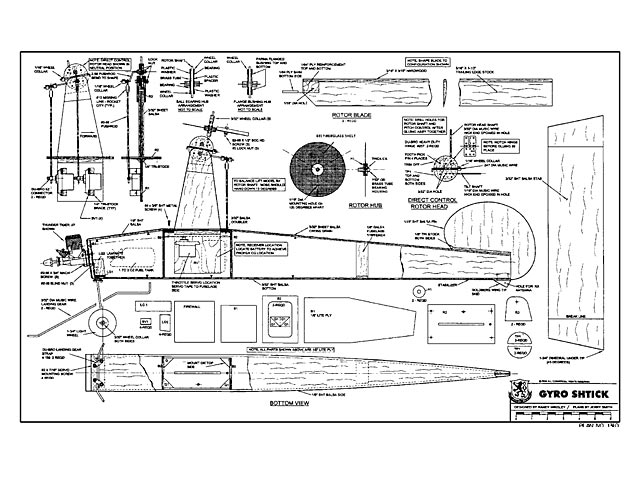 As legend has it, the Ugly Stick (oz5175) came to be in the early 1960's. It was designed as a test bed for the then new proportional radio systems. Since that time there have been giant Sticks, littlest Sticks, canard Sticks, biplane Sticks, twin engine Sticks, and electric Sticks. Sticks made of balsa wood, fiberglass, cardboard, spruce, and I suppose Sticks made of sticks!

So why has this less than aesthetically pleasing machine been incarnated in so many forms for so many generations? My best guess would be it is simple, rugged, and proportioned to fly well. This version of the humble old Stick trades in its wings for a set of rotors! Ladies and gentlemen, without further ado, may I present the 'Gyro Shtick'!

Far from containing any radical or new ideas, this autogyro benefits from the hard work of many other designers. I've borrowed ideas from other successful gyros and sized or simplified them into a package I felt would be ideally suited to the first time autogyro builder/flier.

The Gyro Shtick has a rotor diameter of only 32 inches. The model can be powered with many different small lightweight engines. It weighs less than a pound ready to fly, and requires only a simple 3-channel radio for control. There are no built-up structures and I don't even recommend covering the model with plastic film.

In spite of its light weight it is more than rugged enough to withstand the inevitable mishaps encountered when one learns to pilot an autogyro. I've done everything I could think of to make this gyro simple and inexpensive. With persistence you can build Gyro Shtick in a weekend..." 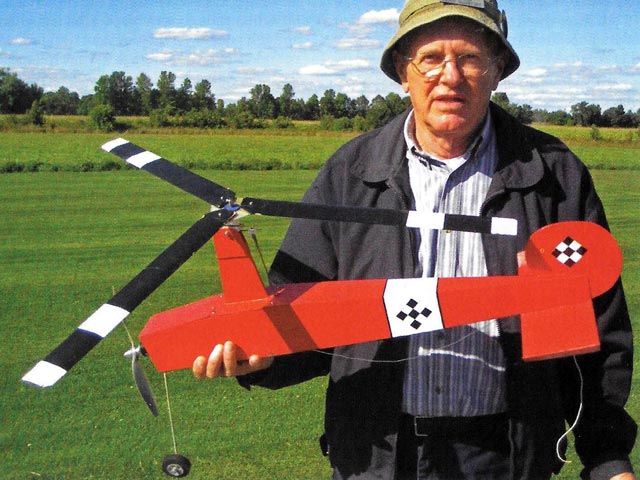