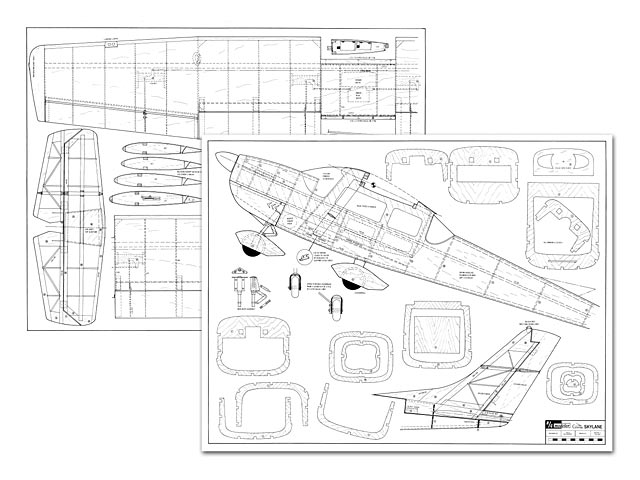 Quote: "First of several magnificent RC scale ships to be featured in RCM, the popular Cessna 182.

PRIOR TO 1962, four thousand five hundred and ninety Cessna 182 Skylane aircraft were built by the Cessna Aircraft Company, Wichita, Kansas. Then came a new Model of the Skylane (the deluxe version of the 182) with a new fuselage, glass all around giving 360° vision, flight-sweep tail, and a very attractive color scheme. On my way to the bluff where I had been slope soaring gliders, I passed the Orange County airport and saw a then new 1962 model in blue and white. One look, and I was convinced that there was an aircraft with lots of room in the newly designed fuselage - room for almost any amount of radio gear!

Wheel pants (now called wheel speed fairings) added to the well proven single leaf main landing gear and nose wheel made this a very attractive airplane to duplicate. Due to the fact that large scale control models always seem to look nice and impressive I chose the scale of 2 in = 1 ft. In February 1962, Torbet Aircraft provided some full color brochures and a blue-and-white. Skylane for photographing. I went away with 24 detailed shots of this ship from all angles. While in Japan my last time, and in association with Masahiro Kato, the design and construction of two prototypes was completed, then test-flown using a new Orbit 10 superhet furnished by Bob Dunham. Since that time I have received a number of requests for the plans to this ship, and decided to have them published by R/C Modeler.

A number of improvements have been made to this model since the original was test flown. Modifications include exact scale flying surfaces plus the addition of flaps, lights, and full sheeted wings to simu-late the metal covering. Inasmuch as this scale model is not for the beginner, I will forego a step-by-step construction, article but by fol-lowing the numbered sequence of the parts the average model builder should experience no difficulty in building this beautiful model. Of course, the high wing design requires careful selection of balsa and plywood, as strength is a necessity around the cabin area due to the extensive use of glass. For this reason, good 5-ply, 3/32 thick spruce plywood was used for all formers and cabin bracing. I highly recommend the use of white glue, which gives a tough resilient joint that will dry in 20-25 minutes on a warm day. Balsa is then used to fill in, plank, and round out the contours of this scale model.

When cutting out formers #1 through #14 from 3/32 plywood and using this as a guide, cutting was simplified. In removing the center of the former, cut exactly on the line - do not allow any more for 'strength' as it will add unwanted weight: Make sure, however, that the notches are cut sufficiently deep so that the rock-hard 1/4 in square balsa which serves as a crutch does not protrude. Cut two doublers from 1/8 ply (#15) and, using Weldwood Presto-Set glue, apply cement generously, then rubber-band these parts to the fuselage, using a T-square for alignment. Select the motor you intend to use and space the hardwood mounts accordingly. I used an OS .49 R/C for scale appearing flights, although choice of a motor should be governed by the amount of extras you intend to include and the degree of finish you desire.

The main landing gear mount (#17), cut from 1/8 plywood, fits snugly between, bulkheads #7 and #8 and rests on three 1/4r square bottom stringers, held down with two pieces of 1/4 in square glued to #7 and #8 by the width of the fuselage. Notice that former #6 has an elongated slot. My receiver was contact cemented to a piece of sturdy foam rubber, then cemented to 1/8 plywood. One end of this assembly is inserted .into the slot and two wood screws used to hold the opposite end in Place. Later, when I repaired and renovated the fuselage and built a second ship for passengers (one a blonde named Midge), a Kraft Custom 10 receiver and Medco power pack was rolled in sponge, bound with a rubber band, and stuck beneath the floor board that the seats rested upon. The servos are installed flat.

Completely shape the nose, then cut the engine hatch out with a razor blade or sharpened hacksaw blade. With lots of room up front, I inverted the engine and installed the engine servo forward of the main bulkhead. Now we come to a point where ingenuity is required - the duplication of the scale nose gear..." 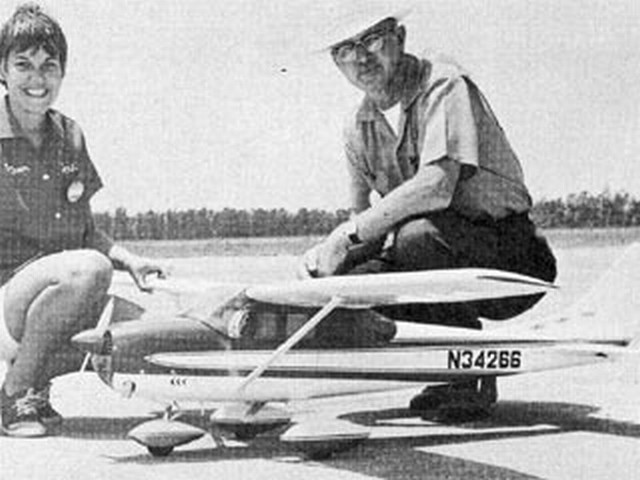