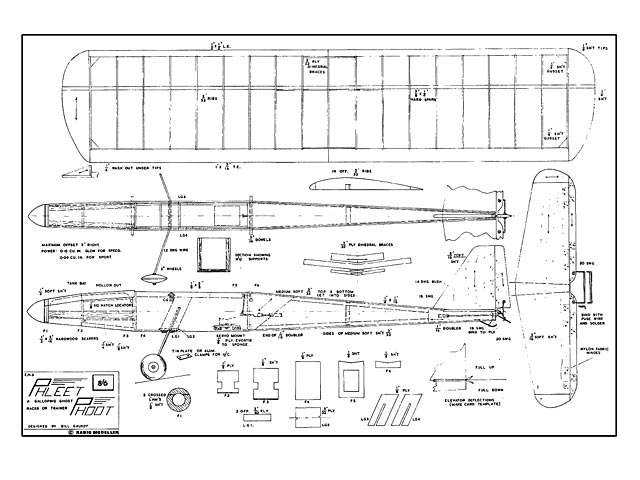 THE simple appearance of this little model is rather deceptive; it actually embodies all the best features of Galloping Ghost design. Although few people realise it, the most important feature of such design is light weight. Nothing ruins the performance of GG models so effectively as weight. Firstly, then, this one is built lightly, but with more than adequate strength. The original fuselage emerged almost unscathed, after being planted eight inches into the turf from five hundred feet up; this unhappy situation arose when a too-thin wing, aimed at even higher speeds, broke up in mid-air, following half an outside loop! Secondly, because high speed was the prime objective, the fuselage frontal area has been kept low. There is just adequate room to house the radio gear; in the original an RCS superhet with a transistor amplifier, and Mighty Midget, were used.

Wing dihedral is fairly high, because this, whilst not affecting the flying speed, does give quick response to rudder control. It is common to find people overlooking the necessity for reasonable dihedral, when rudder alone is used for steering. Many GG racers are notably lacking in rudder response and, consequently severely hampered in racing where quick cornering is most essential. The tail surfaces are of soft wood, because of the need to keep the tail end sufficiently light to permit correct CG location without the addition of lead ballast.

Power on the prototype model has been provided by an O.S. 15, which gives a sparkling performance, to put it mildly. If you feel capable of handling a missile, try a Cox Special up front. Take-off with an O.S. 15 is accomplished in about five feet, so with a Cox one may expect VTO! For gentle relaxed training or sport flying, the Phleet-Phoot will perform happily on 0.09 engines, but do avoid that lead-lined balsa that gets left at the back of the rack at every model shop in the country!

This design uses every good feature of GG not the least being the narrow-chord elevator and high pulse rate. At full up, the rate does not go below four cycles per second. Full down is about fifteen cycles per second..." 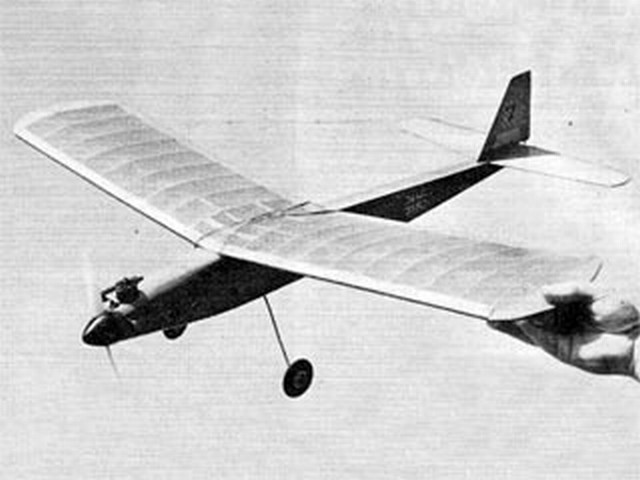