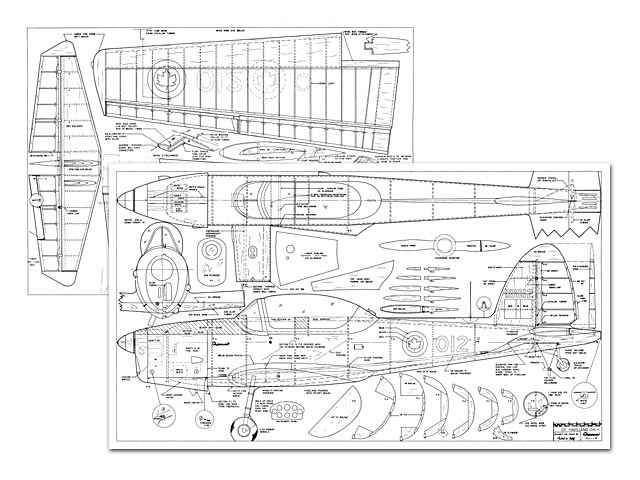 Quote: "Winner of the Scale World Championships at Borlange, Sweden and the Dayton Nationals, this superb RC craft has performance to match its outstanding realism. Chipmunk, by Bob Nelitz.

When MA discussed with Bob Nelitz the publication of this Chipmunk it was agreed that the presentation as an AMA Scale plan would be a monumental task for both designer and magazine if all of the many fantastic details were to be properly depicted. Moreover, Stand-Off or Sport Scale is, by far, more popular. For these reasons, this presentation is for a Sport Scale version. However, a representative selection of photos display the designer's approach to duplicating details of the full-size aircraft.

Like all good designers, Bob has a design philosophy, a sense of how various factors - weight, structure, power, performance, etc - come together when things are committed to paper. It is more than drafting a pretty airplane. then accepting weight as it falls, or sluggish or deficient flight characteristics. Weighing 11 pounds with a wing span of 86 in (24 oz wing loading) and Webra Speed power, the machine has appropriate performance and, what is vitally important, excellent handling qualities. If you are into Scale - even if your aren't building the Chipmunk - we urge you to read the article carefully, especially for overall impressions.

SURPRISINGLY, the Chipmunk was designed more than 30 years ago. Eyeing the replacement market of the then weary deHavilland Tiger Moth, the Chipmunk was the brainchild of designer WJ Jakimuik and prototype CF-DIO-X first ventured off the ground May 22, 1946. It was designed, manufactured and flight tested at the deHavilland Aircraft of Canada's Downsview plant in Toronto.

A total of 1547 Chipmunks was produced, 1250 in the United Kingdom sporting the not so pretty split greenhouse canopy. Many thousands of pilots in umpteen air forces took their ab-initio training in the Chipmunk. It was not until 1956 that the RCAF acquired the Chipmunk as their primary trainer, maintaining it until 1968, when it was finally retired. A ready civil market grabbed all that were available, and many can be seen today in the hands of private owners and flying clubs.

After speaking to pilots who flew the Chipmunk and eventually getting my own hands on the controls of one, it became obvious that here was an aircraft that would make a fine RC subject. However, I felt, to emulate the full-scale stable and docile handling characteristics, it would have to be a fairly large model and not overpowered, so as not to become another pattern ship with a scale outline.

After collecting as much data on the prototype I could find, including original factory working drawings and various maintenance manuals, construction was commenced.

Completion and test flying came off without a hitch. It flew right off the drawing board, so to speak. Only minor rudder trim adjustment was necessary. Here was one of the most delightful models I had ever flown, very stable and responsive to all control functions at all speeds with no bad habits whatsoever, making it very easy to fly and fully aerobatic as well.

Construction Fuselage: The fuselage is constructed directly over the plans via the familiar crutch, former and planking method. Note the 1/64 plywood between formers F-2 and F-4. This serves a dual purpose. It adds strength to the cockpit area with its lack of bulkheads, and provides a smooth surface for cockpit detail - if desired. The plywood need only go down as far as the wheel and spar position, which provides a strong anchor for it. It is not necessary on the belly; it would be difficult to apply in this area because of the compound curves.

The balsa planking should extend 1/2 in beyond the F-2 position. This will leave a surface to enable the application of fiberglass tapes for joining the fiberglass nose piece to the planked fuselage. Install the tapes from the inside of the nose section, after cutting out the radio access hatch.

I must admit it is not desirable to have the radio in the same compartment as the fuel tank; however, I found it necessary in this case. Because of the long tail moment the completed model becomes tail heavy so, to eliminate undesirable nose ballast, I had to mount all equipment well forward. I have encountered no problems because of this. Just be sure to mount a new, good quality fuel tank, such as Kraft. As an added precaution place the fuel tank and all connections in a well-sealed polyethelene bag, just in case. Seal the battery pack and receiver in plastic as well. The fiberglass access hatch should be as tight fitting as possible. I seal mine with Vaseline each time it is opened, to prevent exhaust drippings from seeping into the compartment.

The cowling and spinner are both fashioned from fiberglass. The cowl is moulded in one piece and then sawed into five sections and put together as illustrated on the drawings. The lower portion was removed and replaced by an aluminum section..." 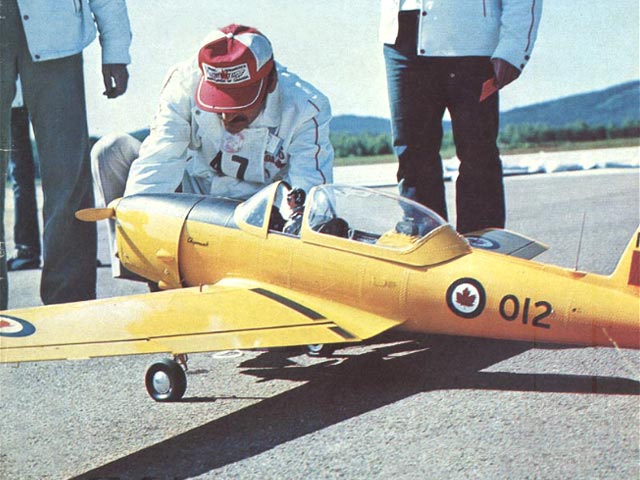