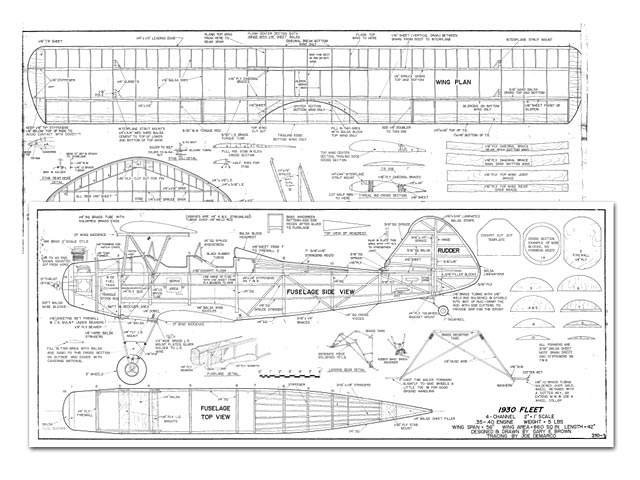 Quote: "THIS project began to evolve several years ago while attending a fun-fly held at a quiet little country airport here in central New York. Having lots of time between events. I wandered up and down the two rows of open hangars carefully examining each of the full-size aircraft. What interesting aircraft they were! There were two English Tiger Moths, two immaculate J-3s, a red and white Porterfield, two tiny low-wing home-built racers and way down at the end, a restored orange and white 1930 Fleet.

Almost immediately I began to consider the Fleet for an RC sport scale project. It looked relatively easy. It had identical top and bottom wings. straight fuselage sides, and no complicated curves. Soon I began to form my design specification. First of all, I wanted it to be of medium to large size for smooth and easy handling. Secondly, I wanted it light for low wing loading, for scale-like flight. Thirdly. I wanted to use an engine in the .35 to .40 range for fuel economy, as I did not care to pay for all the fuel a .60 can guzzle. As it turns out, a .60 is entirely unnecessary for this design. The model is not intended to fly like the Pitts and Pulsars!

A scale of two inches to one foot was decided upon which yielded a nice, neat 56 inch wing span. The wing area figured out to 860 sq in. With a ready-to-fly weight of five pounds, wing loading figured out to 13.4 oz/sq ft of wing area. This factor contributed greatly to its easy flying characteristics and ability to use less engine than one would normally expect on a model of this size.

Takeoffs are short and graceful, with the airfoil stab lifting the tail quickly. In the air the model can be flown very slowly in a scale-like manner without fear of stalling. Being a light biplane with lots of drag. it will slow down quickly. On one occasion, I idled back too soon and the model landed just short of the field in a 'stretched' glide. Although the ailerons became less effective at low speed, rudder control remained good and the model never tended to drop a wing tip.

To describe the construction, you might say it is just a big 'stick job.' The only sheeting and solid surfaces are in the forward fuselage and wing center sections. All other components are built up for lightness as well as strength. Both wings are built over the same plan. They are identical except for ailerons on the lower wing only and their respective center sections.

The stabilizer has been designed so its incidence can be changed by adjusting two 4.40 bolts just behind its leading edge allowing for an additional trim control. Anyone building the model could easily install a fifth servo to operate the stab, thus allowing for greater in-flight trim changes just as on the full-size aircraft. The stab could also be mounted rigidly as is usually done, if you wish only to use elevator trim.

One other somewhat unorthodox feature is the landing gear suspension which consists of rubber-bands acting as bungee cords to take the jolt of landing from the axles. I have used this system on two models to date with very good results and no problems. This method allowed me to use the lower end of the cross members as axles with the top ends soldered to the front landing gear tugs.

If you prefer, the wings can be attached with nylon bolts instead of rubberbands. Modify the bottom wing and fuselage with threaded hard-wood blocks and leading edge dowels in the usual manner. For the upper wing: bend loops in the upper ends of the eabancs for the screws and securely epoxy hardwood blocks to the spar structure of the upper wing..." 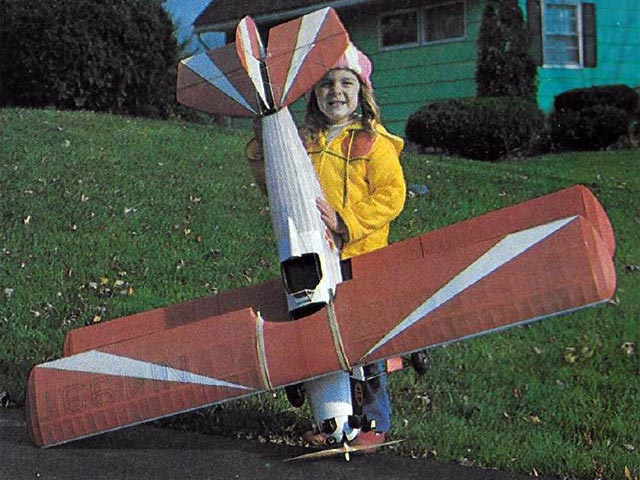