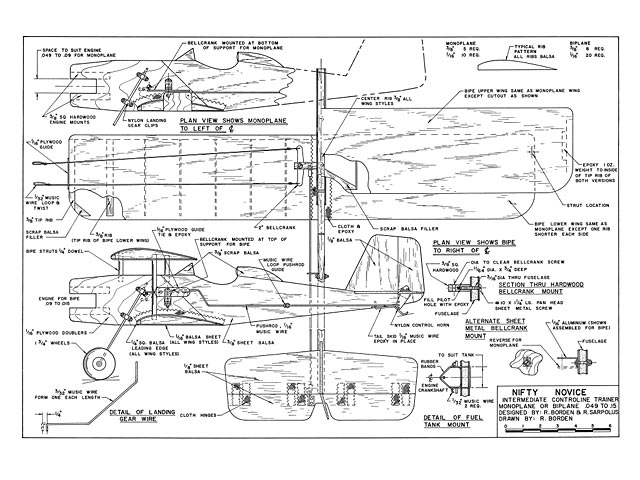 Quote: "In line with the series of 'Tenderfoot' articles in American Aircraft Modelef, here is a project for an 'advanced Tenderfoot.' The design is patterned after many of the single-seat homebuilt airplanes seen today, and resembles many airplanes built in the 1930's. This model is a good basic and intermediate trainer, better-looking and bigger than the 049 types (for better performance), but still very easy to build-and you have your choice of a low wing monoplane or a biplane. If you build the low wing version it can later be easily converted to a biplane. An 09 is plenty of power; we used the Cox Medallion 09. A 15 can be used in the biplane for even greater performance.

The model was developed by the authors. Ray is an old-time modeler going back to ignition-engined free flights and early control-liners, and hadn't been involved in modeling since the glow plug came along. Dick started in control line, but for the past few years had been very active in radio-control competition flying. Ray was anxious to get back into modeling but wanted a project to get his feet wet without going too deep. A small control-liner seemed like the best approach and could be used to get the rest of the family involved with flying, too.

Dick worked up a design featuring the single-wing, biplane conversion, and Ray built both versions and found that the basic modeling skills he had weren't lost, just rusty from lack of use. The project succeeded - the planes were easy to build and fly. The models proved to be good trainers during the first flight session, held to teach the whole family how to fly - the first nine attempts resulted in nine full-bore crashes, and the Nifty Novice was still in perfect shape.

Construction: Let's start with the wing. Cut the required ribs from 1/16 and 3/8 balsa. Edge-glue two pieces of 1/16 balsa together for the bottom of the wing and lay on a flat surface. Use the plans as a guide and mark the rib positions on the 1/16 balsa; glue the ribs and the 1/4 in square leading edge in place. Sand down the leading edge. Put plenty of glue on the leading edge, ribs, and along the trailing edge; add the top 1/16" balsa wing covering,
holding it down with pins until dry. Sand well, finish shaping the leading edge and round off the wing tips. 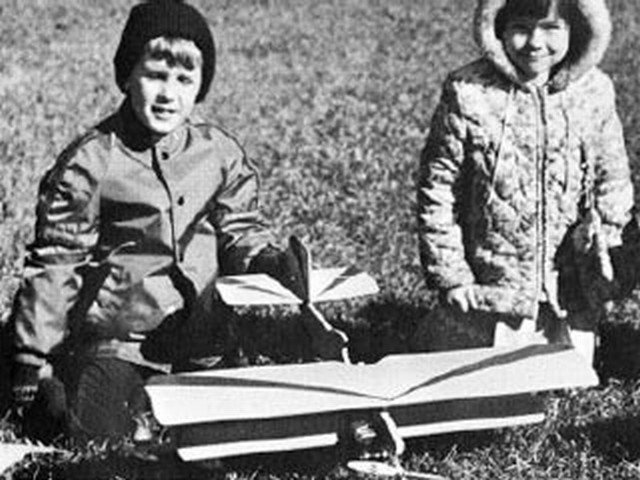