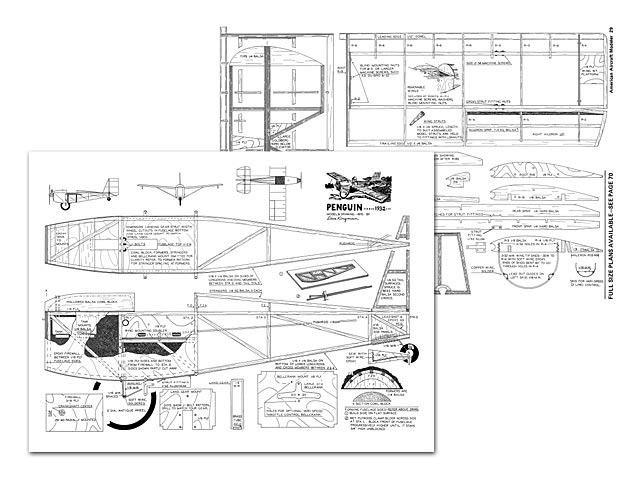 The scale subject is unusual, since the original Penguin was a 1932 non-flying trainer craft with only 15ft wingspan and a 3hp motor.

Quote: "If you fancy yourself an airplane spotter, but couldn't identify this design from the past, don't feel bad. It's not an airplane! Turn to page 51 of the 1932 'Flying and Glider Manual' and learn about the Penguin practice plane, so named because it has wings but can't fly. Plans for the ship call for 15 ft wing span and a motor of 'at least 3 horsepower.' They show an aircraft-type stick and rudder pedal control system operating oversize control surfaces. Skills required in balancing a Penguin on its main wheel as it bounced across a field could later help a fellow learn to fly. I bet it was fun! (Lost your 1932 Manual? The Experimental Aircraft Assn, Hales Corners, Wisconsin, has reprints for sale.)

The full-size design is so much like a huge model that it seemed natural to build a miniature of it. Model construction follows full-size construction with additional changes to simplify and strengthen the structure. Detachable wings are uncommon on control-line models. This feature was retained for the same reason the big Penguin had it - ease of construction, storage and transportation. The bicycle landing gear was a question mark. Would a model ROG as planned, or would it dip its left wing and come charging across the circle at me? No problem. Held with both wheels and the right wing skid touching the ground, the model is released heading down-wind. An old O.S. 35 gets mine aloft in a quarter lap. Flight is very stable, with the off-set ailerons and rudder providing a firm pull on the lines at all times - an essential factor when using throttle control on gusty days. The ailerons and wing weight are what keep the right wing low on takeoff, so retain them even if you don't use an RC-type engine and three-line control system.

Information on the plans should be sufficient for modelers who are past the profile or foam construction stages. Covering an open framework model may seem old-fashioned these days, but this is a scale model of an old-fashioned machine.

Construction. Build the sides of the fuselage first. The right side can be entirely made on a flat board. Cut the 1/16 plywood forward side piece and then assemble the 1/4 square strip balsa parts, gluing them to the plywood piece as indicated. The completed side should have its forward section permanently curved, plywood to the outside of the curve, before it is joined to other fuselage components. Build the left fuselage side. Bend both sides as follows. Side should be secured to a flat sur-face at station one. A block of wood clamped or nailed to a board with the side sandwiched between is suggested.

Soak the side, from station one forward, with water. Carefully pry the front of the side high enough from the board to slide a 1/4 shim under it. Keep the area wet, and later replace the 1/4 in shim with one 1/2 inthick. Finally block the front a bit over 3/4 in high, so that when the side is removed from the board it will have a permanent 3/4 in inward curve from station one to the firewall. This procedure could take from a few hours to a couple of days. Don't be impatient and break wood by trying to bend it before it's ready!

The rest of the fuselage builds up like the 'stick' models we all started to build when we were kids. (I was 27 before I finished one.) The sides should have wood removed at the rear where they join; trim the insides as shown on plans. Join the sides by inverting them in position on the plan top view, then cutting and gluing cross members in place. Use an artist's triangle to keep the assembly true during this important phase of construction..." 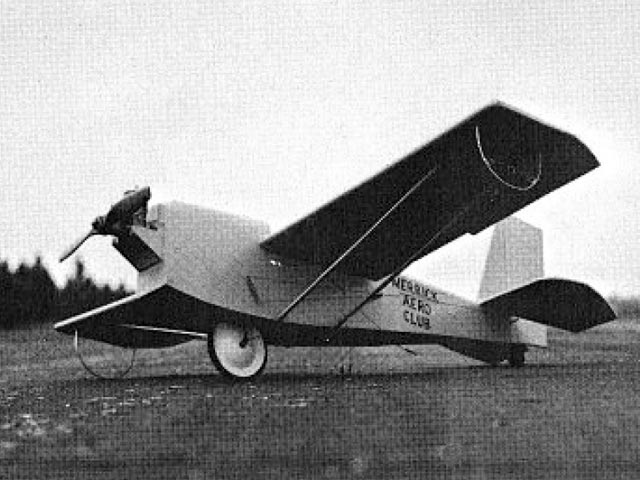