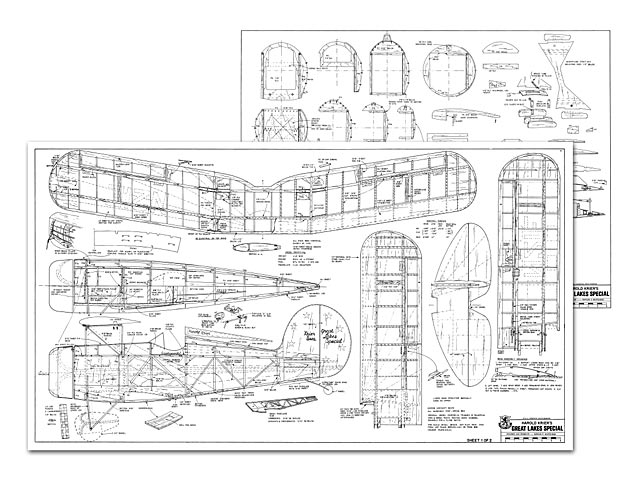 Quote: "Over the past 10 months I've been having a ball putting the ship through its paces. In fact, I haven't had a proper aerobatic biplane for the past 10 years, and 1 swear that I feel 10 years younger again. Complete flying enjoyment is guaranteed with this machine, so let's get down to the serious part now.

My prototype model uses an Enya .46 4-stroke turning a Graupner 11 x 6 grey propeller and burning 10% nitro 2-stroke juice - I like plenty of lubrication in my engines. The exhaust pipe sports an O.S. pressure fitting which applies exhaust pressure to the 6oz fuel tank. For first flights, I suggest that you add lead to get the CG at the forward point. When you have become used to the model, try moving the CG back to the aft position. The main wheels are set quite well forward and the gear has a wide track, making the ground stability good. However, the rigid legs make the model quite bouncy over rough ground. For all take-offs, use the low control throws as shown on the plan. A spot of up elevator at the start of the run will prevent nosing over, and slight right rudder is used to keep her straight. Using full throttle, the model breaks ground in less than 10 yards, and pointing the nose upwards produces one heck of a climb out. These small 4-strokes have come a long way in the past three or four years..."

Quote: "Great Lakes. Gordon Whitehead describes this famous aerobat, and talks over his plans designed for .46-.53 4 stroke or .40 2 stroke engines.

The neat little biplane accelerates along the grass strip. As she lifts off in a shallow climb, the right wing dips, and clears the ground by 4 feet or so as the plane slow rolls onto its back. The pilot holds the ship level for a few more seconds to achieve more speed. With forward pressure on the stick, the Great Lakes Special curves into a vertical, arrow-like ascent. A 2-point half roll brings the sunray bedecked planform into view, and is followed by the whirling flick roll which is stopped precisely on the same vertical line. With forward speed rapidly decaying, the plane rudders over the top of a stall turn, dives for speed, and executes a negative 1-1/2 flick roll which it exits still pointing downwards. With a well-timed push on the stick, the plane levels out at about 10 feet altitude, upside down, and in position for an outside Cuban 8.

The display continues with a series of hesitation rolls; 4-point and 8-point rolls, and a 6-point back-to-back roll; and then with a humdinger of a horizon to horizon super-slow roll, which takes some 15 seconds to complete. A whole variety of looping maneouvres follows; hesitation loops, loops with flick rolls at top and bottom, a rolling square loop, and horizontal and vertical eights, both round and square. A double stall turn with half rolls is next, and then we're into knife-edge flight, demonstrating 1/2 and 1-1/2 rolls from one knife edge to the other.

The manoeuvres flow from one to another as the pilot's imagination guides the plane through a display designed to show his aircraft at its best. All too soon, it's time to return to earth. An inverted traffic pattern ends with a slow half roll to erect flight just before touchdown.

In 1956, Harold Krier and his brother Larry bought a 1931 Great Lakes 2T-1-A, a 2-seat tandem cockpit trainer with a 125 hp Menasco in-line engine. The general lines of the plane were somewhat re-miniscent of those of the Stampe SV4B. After a total restoration, what emerged from the brothers workshop was a 185 hp Warner radial powered single-seater, with the fuselage rounded off with formers and stringers, and with that gorgeously flamboyant colour scheme which summed up the new character of the plane exactly. At the time of its rebirth, the Krier Bros' Great Lakes Special was rated as the finest aerobatic mount of its day; and Harold Krier won almost every major American aerobatic trophy with it over the next 4 years.

Besides being a keen competitor in aerobatics at national level, and the major driving force behind American aerobatics at that time, Harold Krier was a great showman. He thrilled many an airshow crowd with his all-action displays, packing some 44 manoeuvres into a 15 minute programme. The flight described at the start of this article is based upon the kind of display sequence that Harold Krier would have demonstrated, and I can readily perform such a sequence with my replica, albeit lacking in the kind of polish which H Krier would have shown. Using a second generation 4-stroke of around .46 to .53 cu in displacement, or any Schneurle .40, this model will entice you to perform all the complex manoeuvres you can dream up. It constantly fires my imagination, and with its vivid red and white flashing swept wings, compels me to want to turn every flight into an aerobatic display. A plane which does that to its owner just has to be the one which you need! So let's get building.

The order of construction is not that important, but you'll need to have the fuselage framed up in one piece before you can finish the lower wing root.

Fuselage: Spend the first evening making a pre-cut kit of parts. Then assemble one fuselage side, less ply doublers, over the plan. When the first side is dry, assemble the second one directly over the first. That way you will get 2 identical fuselage sides. When the glue is dry, remove the sides from the plan, separate them with a thin blade, sand their faces smooth, and add the ply doublers. I used PVA glue here, and weighted the sides down onto the doublers with a pile of books until the glue had set. Bind the front U/C leg to F2 with strong thread, but don't epoxy it yet..." 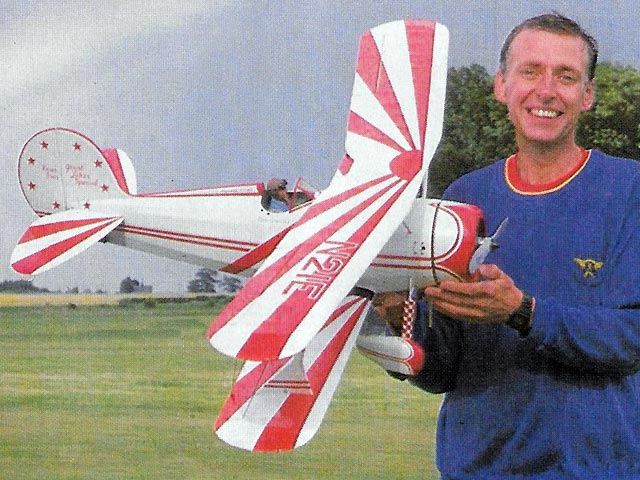